What Do You Do With Your Book Annotations?

I write in my books.

There, I said it.

Ever since I can remember, I read my school books with pens or pencils or highlighters to mark passages and help me learn them for exams or papers. Heck, I’d often read magazines with a ballpoint pen and underlining special lines of text or ripping out pages that had recipes.

As I started writing and publishing in earnest, I eventually started reading fiction with a pencil in my had. For this, it’s almost always pencil. I actually like the sound and feel of a pencil scraping across the pages and I’m underlining a particular good turn of phrase.

I have also been known to markup books as I break them down and try to figure out why, say, Dan Brown’s prose seems so effortless or how a Clive Cussler novel was structured. It’s like homework, but, you know, fun homework.

When ebooks popped into my life, I kept up the practice. What’s nice about the Kindle Paperwhite is that you can go into your own account via a browser and see your annotations and, most importantly, copy and paste them into a word file.

Why? So I can have my own personal reference notes for anything I read.

But for those of you who write in your books, what do you do about all those annotations? I recently finished a trio of similarly themed books: two by Steven Pressfield (Turning Pro and Put Your Ass Where Your Heart Wants to Be) and Atomic Habits by James Clear. All three of these books are fantastic and are chock full of great action items.

I marked up Clear’s book a LOT. I bought the physical copy of all three of these books and now it’s time for my next step of archiving my annotations.

I dictate my notes and passages from the book into a text file via my iPhone.

I strictly use a text file on the phone mainly because I don’t want to mess with formatting. I just want the words. Later, I’ll copy the plain text into a word file and apply some formatting like chapter headings and sub-headings. Since Clear uses a few charts and diagrams, I’ll also likely snap photos and insert them into the word file.

That might sound like a lot of effort, but I find that (a) I don’t mind and (b), it enables me to digest the content at least three times. The first is when I read it. The second is when I dictate the text, and the third is when I format it. And, yes, old-fashioned person that I am, I will also likely print it out and keep it in the book. I also keep the digital copy in a Dropbox file so that I can access the content wherever and whenever I am.

As a father with a 26-year-old stepson who has school loans to pay off and as the father of a son, almost 17, who is going into his senior year in high school, I wonder how high the education-related debt between the two will be by the time the younger one finishes college.  Or gets a Master's, if he does that.  At age 60, it's difficult not to envision spending the rest of my life helping to pay off my kids' school loans, a situation countless parents face in this country.  It's just a wonderful situation: your kids leaving school and starting out in adult life saddled with loans, and the parents, as they age, getting closer to the end of things but still working away, burdened with the same loans.  It's hardly a situation that's news to anybody in the United States, but I mention it as my lead-up to saying that a few days ago, I saw the new film Emily the Criminal, starring Aubrey Plaza, where the main motivating factor for the title character (Plaza) is to find a way to get out from under the $70,000 in school debt she has to pay off. 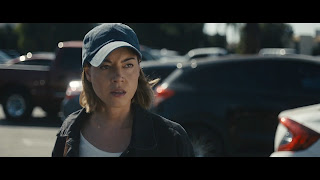 Living in Los Angeles, Emily works as a so-called independent contractor for a catering company.  Her hours can be cut anytime and without warning by the person in charge there.  She has trouble passing background checks for well-paying jobs because of a DUI on her record as well as a felony conviction for assault.  Both offenses, when we hear the circumstances behind them, don't seem to merit the punishment of ruining a person's entire life, but so it goes.  Someone who went to a pricey art school and graduated from it with a degree, whose drawing and paintings we see are good but who recently has been doing very little art because of all the stresses in her life, is facing an existence that feels like a trap. When a co-worker at the catering job hooks her up with what he describes as a "dummy shopper" operation that pays $200 cash for each shopping foray, Emily goes to see what the alleged work is, and she finds that it's actually a credit card fraud ring fronted by a guy named Youcef.  Youcef is quite upfront with all the prospective phony shoppers.  What they'll do, he says, is illegal, no question about that, but it is safe.
Well, not as safe as first promised, as it turns out.  Emily starts going into stores, and eventually a car dealership, to buy high-end stuff with fraudulent credit cards.  In classic film noir fashion, what begins as something small grows in criminal scope. Things go wrong.  But Emily, we find, has the backbone for this kind of thing, and she only gets tougher and more inventive as dangerous complications arise.  She goes all in on the criminal activity, determined to save enough money to free herself from her financial predicament so she can get back to doing some art and travel to places she wants to visit, like South America.
Emily the Criminal is low-key but tense.  Aubrey Plaza plays things seriously and with a tenacity one completely understands.  In a system this screwed-up, are you not justified in saying to hell with the niceties and to hell with "playing by the rules", whatever that's supposed to mean? Plaza makes sure she keeps her character thorny but you definitely pull for her because, damn, at bottom, in her analysis of things, she's right. And the very last scene, delivered deadpan like the rest of the film, is pitch-perfect, done with just the right irony and cynicism. Once again, someone who made their name doing comedy is superb in a non-comedic role, and for writer/director John Patton Ford, the film is quite a strong first feature. Emily the Criminal delivers.

Posted by scott adlerberg at 7:47 AM No comments: