I’m on the road as I write this, in California visiting prospective colleges with my son, who’s about to be a high school senior. So far the trip has been smooth, with no chance meetings with anyone that have led to Tony Soprano like activity away from the actual college touring. I’m glad about that.

Besides the schools, I did visit, for the first time, the Academy Museum of Motion Pictures in Los Angeles, where they have, among their regular galleries, an exhibition that just opened called “Regeneration: Black Cinema 1898-1971”, an exhibition that, as the museum describes it, offers “a rigorous and celebratory exploration of the achievements and challenges of Black filmmakers in the United States from the dawn of cinema to the Civil Rights movement”.  It’s a fascinating exhibition, one in particular I wanted my son to see, charting as it does all sorts of little known facts about Black actors and actresses and filmmakers from the silent era till about 1971. And of course I’m not talking about representation only in Hollywood films but in such works as race films, the hundreds of movies made from the silent era till the early 1950s that were produced for Black audiences and had Black casts and consisted of people talking as people talk, not as Black characters in so many Hollywood films of the era talked. Comedies, musicals, mysteries, thrillers, adventure films, melodramas — race films covered them all, just as Hollywood did. I’m ready to try to track some of these films down to watch when I get back home (I haven’t seen all that many of them over the years), and I mean beyond the films of the Black filmmaker Oscar Micheaux, the best known and among the most prolific of the race films filmmakers.

The exhibit had a number of good posters on display as well as everything else, and a few particular favorites of mine I took photos of. They’re from Hollywood films, I have to say, and, yes, films involving crime. 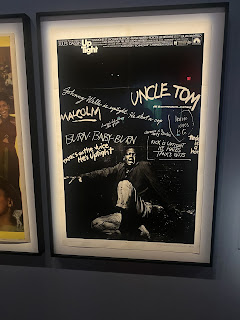 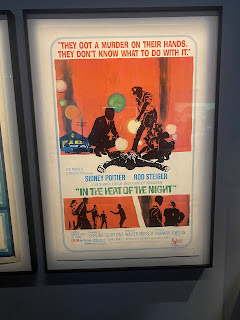 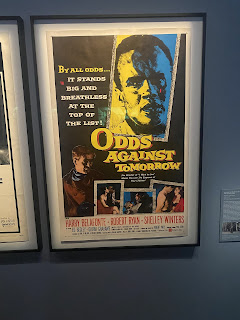 Then there was this, not related to a crime film, but a poster I couldn’t help but gape it. 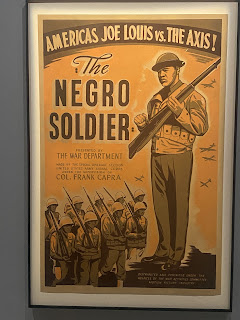 High praise, I guess, to portray the then heavyweight champion of the world as taking on the entire Axis. But anyway, this and other telling curios help make this exhibit a must if you happen to be in Los Angeles anytime in the near future.

Posted by scott adlerberg at 1:04 AM