The End is Near 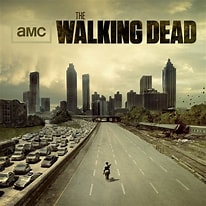 “Days Gone By,” the premiere episode of The Walking Dead, debuted in October of 2010, thus thrusting the show’s death-grip onto millions of fans.  Imagine, a show about humans, loved ones, rising from the dead to feast on fellow humans, shockingly splayed against physical reminders of what our world was, keeping a grip on an audience for so long. The apocalyptic imagery becoming iconic. The view of Rick, a lone horseman, riding towards Atlanta, a city overrun by the dead. The burnt black cars and signs of violent struggles in the slow lane out of town. Those first few years felt unchartered, the show at once disturbing and moving, while walking us through the devastation. Addictive. 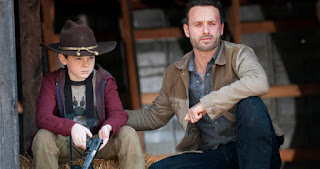 See the barn scene in Season 2, when Rick tells Carl to take the gun. Tells him the harsh truth about the world they live in and how everyone dies, no matter how hard you try or hope. No matter how much you love someone they will pass, because everyone dies. The heartbreak of a father having to tell a son this truth at such a young age. The two sitting quietly looking out over the farm, you can see there’s a chill in the air, with Rick’s fatherly voice unrelenting in its honesty. The slow, faltering piano sounding very much like a breaking heart.

The season 2 death of group sage and moral compass Dale Horvath sent viewers into absolute grief. After standing against the violent, chaos brought by antagonist Shane, Dale wanders from the house and into the quiet, misty fields, distracted by his disappointment in his fellow survivors and at a loss from their apparent ethical decline. He’s attacked by a roaming walker and brutally, mortally wounded. Ultimately, after much suffering, he is euthanized by Daryl Dixon with a bullet to the forehead. He dies in agony, with the group frenzied and wailing, confirming there is not always a happy ending.

“Killer Within” finds the survivors enjoying the small victories they have fought for when the rug is pulled from underneath them, once again. The prison yard, just recently cleared, is sabotaged and a mass of walkers are unleashed on our odd, feral family. The group is divided, then separated, and a pregnant Lori is taken to safety by the truly fearless Maggie and Lori’s son, Carl. The choices made by the trio while hiding away from the swarm of walkers is so personal and poignant that it is impossible not to be affected. When Lori’s baby cries out as only Carl and Maggie walk from the deep dark of the prison, Rick collapses in grief.  His misery is palpable. 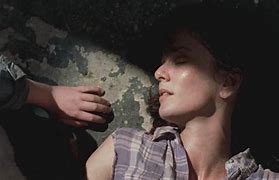 The group fights their own internal demons, whether they be prejudice, greed, addiction, or pride. And the outside world is constantly beating on the doors and rattling collective swords. Yet, by always choosing to gather and work as a community, whether building their homes or defending them, the heroes of The Walking Dead not only survive, but continue to look and fight for meaning and purpose. When they step back from the brink and make the humane choice they move forward as people, and further separate themselves from the mindless flesh-eating monsters living around them, which for me, has always been the main point of the story. 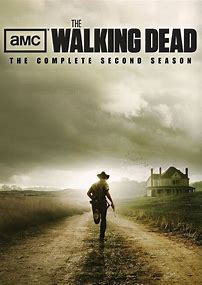