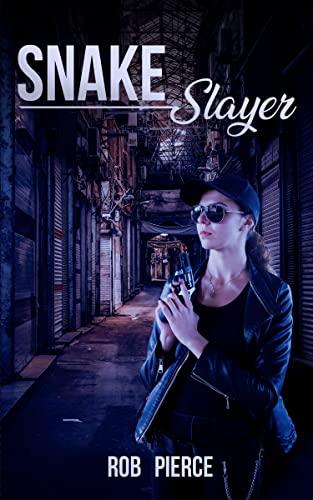 It’s time for a quick shot and this week we’re featuring Oakland writer Rob Pierce. Rob wrote the novels Blood By Choice, Tommy Shakes, Uncle Dust, and With The Right Enemies, the novella Vern In The Heat, and the short story collection The Things I Love Will Kill Me Yet. He has been nominated for a Derringer Award for short crime fiction and has had stories published in numerous crime magazines. His latest release, Snake Slayer, brings together a few of his most popular and most interesting characters. Snake Slayer is about criminals on the run, not just from the law but from other criminals. Two of them are lovers, the third an ex. Deria is psychotic and Vern is her violent ex, who let her go because he thought she lived too dangerously. Russ is the new guy who’s in way over his head. It seems that bad things are about to go down.

My novella Vern in the Heat, first published in 2015, was about Vern, Deria, their relationship and how she changed. Now, it wasn’t strictly a relationship book, as the plot had a lot to do with criminals and their violent acts, but that was a major part of it for me. This book starts with them separated due to her penchant for violence, which Vern, a violent-when-necessary criminal, considers self-destructive. Deria flat out likes to kill. She also wants to survive, so she can kill more. The specifics of this story started with the beginning, the initial bloodbath from which the rest unfolds. Then the story becomes about what killing does to different people, how they unravel or don’t.

The characters are diverse emotionally and mentally, how do you prepare to write for such different people?

The preparation started while writing Vern in the Heat. I wanted to write a story with different points of view. According to my writing group, I wasn’t always doing it successfully. I was told by a good friend, Sean Craven, to read Lonesome Dove by Larry McMurtry. It came to me like providence, in a free bundle of two dozen books but you had to take all two dozen. So, twenty-three books for Little Free Libraries, one for me. Such a majestic work. Chris Rhatigan, who edited that book and this one, had to work with me extensively on conveying those perspectives. He didn’t say a word about them this time around. It’s possible to learn technique. Doesn’t make me McMurtry by any means, but I’m a better writer than I used to be.

That said, I did have to learn one more character, one significantly different from Deria and Vern. Turned out pretty well, I’d say. The character, not his life.


Which character did you find most interesting?

I love writing Deria. Vern, too, but the focus this time was Deria. She’s an exceedingly angry woman; she hates jocks, which doesn’t bode well for any she comes across. I consider the book a radical feminist diatribe. No idea whether any women see it that way. I like women, though, despite how they’ve come off in certain books. Some things are sadly necessary for the consistency of story. In this book, it’s men who don’t fare so well.


Imagine and share where these characters are right now?

After the last page? No idea. Vern in the Heat wasn’t written with a sequel in mind, neither was this one. There were a lot of scenes cut—this was originally a 65,000 word novel, but too many scenes didn’t work—it ventured into the beginnings of COVID and the characters figuring it would all get sorted out quickly. Maybe I can make some of those scenes work. But I’m currently finishing work on another novel, writing short stories between drafts, and anticipate going back to another “novel” rife with scenes that don’t work, but some that work so well. Always a lot to figure out.

Snake Slayer is out August 15.