The Surprising Humanity of Resident Alien 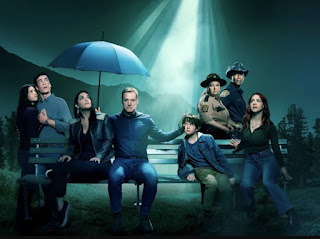 I really enjoy being surprised by stories and characters.

I started watching the TV show Castle because of the premise and Nathan Fillion, but over time realized that Stana Katic’s Beckett was a deeply emotional character that arguably had the biggest character arc of the entire series. John Scalzi’s novel Redshirts was advertised as a Star Trek parody but ended up delivering an emotional ending so vivid that on the day I finished the story, I couldn’t even talk through the ending to my wife without breaking down.

Add to this list the TV show Resident Alien on the Syfy Channel (still dislike that styling). Billed as a starring vehicle for Alan Tudyk, Resident Alien follows Tudyk’s alien character as he crashes in a small Colorado today. He assumes the physical form of the town doctor—Harry Vanderspeigle, a human who does not survive—and attempts to go about his mission to destroy all humans. In the process, however, he meets and interacts with the residents of Patience, Colorado, and learns what it means to be human and all the messiness therein.

Let’s be honest: Tudyk is a gifted actor who can make you laugh so hard you’ll stomach will ache. A great example of this is the movie “Death at a Funeral,” the original British version. Here, Tudyk’s Harry has an odd way to “smiling,” a childlike wonder at the world, a love of “Law and Order,” and a penchant of saying exactly what he’s thinking without any nuance. In every episode, there will be moments that will definitely make you laugh out loud.

A show like this might need someone of Tudyk’s caliber to get it greenlit, but the supporting cast is what makes the difference, and in Resident Alien, the cast is wonderfully just…normal. And human.

Sara Tomko plays Asta Twelvetrees, a Native American nurse who works with Tudyk’s Henry very close. She’s a town native—nearly all the characters are, a trait that plays into the interactions—who gave up her daughter when she got pregnant in high school, the father being a pretty abusive guy. That decision haunts Asta as it would anyone, which is especially hard when the daughter is now in high school herself.

Asta’s best friend, D’Arcy Bloom (Alice Wetterlund), owns the town bar after a skiing accident at the Olympics derailed her career. She’s a borderline alcoholic who so often makes the wrong decisions that you basically think her lot in life is already cast. She thinks that, too, so when she interacts with everyone, there’s general assumption D’Arcy will just always choose wrong.

Sheriff Mike Thompson (Corey Reynolds) and Deputy Liv Baker (Elizabeth Bowen) provide a steady dose of comedy (just in case you think I’m only zeroing in on the everyday drama). Mike’s a veteran cop from Washington, DC, who left the big city for the small town after his partner was killed. He often doesn’t have the right ideas but hides that fact behind over-the-top bluster. Liv is basically ignored by Mike even though she has her brain in the police game and is often correct about the central mystery of the story: what really happened to the real Harry and why are the government officials snooping around. Bowen deadpan delivery, laced with a real-world resignation that she knows she’s too good for the department but doesn’t know how or where to move.

The mayor is a young Ben Hawthorne (Levi Fiehler), a slight man who likes to make candles and takes a backseat in nearly everything and from everyone, especially his more dominant wife, Kate (Meredith Garretson). He dated D’Arcy when they were in school together and Kate sometimes wonders if there’s still a spark.

There a pair of child actors work mentioning as well. Judah Prehn plays Max Hawthorne, the only child of the mayor and his wife. He and his best friend, Sahar, (Gracelyn Awad Rinke) can see Tudyk’s true alien form. Initially they’re scared but soon some to realize they can get things just by threatening Henry.

This may seem like a lot but the story lines are woven pretty well. There is the overarching story of Tudyk’s true mission and which humans ultimately come to know the truth. That’s almost always played for laughs and the laughs are full and genuine.

But it’s the small moments that makes this show rise above others and shine, and this week’s episode was a great example. Asta did a thing that tormented her so Harry used his alien ability and wiped her memory of the incident. The ripple effect meant she missed not only that memory but other things as well, things that hurt others. It was then that Asta told Harry that everything humans experienced, the good as well as the bad, is equally important. For Harry, he’d just as well just be happy, yet that’s not always possible.

D’Arcy’s actions the past few episodes, relationship-wise, were like walking on thin ice. Would she keep making the bad decision and self-sabotaging her life? That’s what she’s always done and there was a moment in this week’s episode when she fell back into the same habit. She had a moment of reflection and made her choice.

Lastly, there was a recurring theme of death, specifically end-of-life. Henry doesn’t understand it and wants to just have it happen away from him. But as a doctor, he needed to be with a dying man who told Henry how good his long life was and how ready he was to see his deceased wife.

Within the span of about ten minutes of the episode, I went from laughing and literally holding my sides to wiping away the sting of tears.

That’s the kind of show Resident Alien is because that’s the way life is. This is a great show and I highly recommend it.