Where to begin? And what to say? Well, let’s state the obvious: If you’re reading this, then you got through 2020.

That means you did what you had to do to navigate this unprecedented year, this historic event that touched everyone. As a historian, I often read about the folks who lived through the American Revolution, the Civil War, the Depression, or World War II and wonder what it was like to live through an event they themselves didn’t know how it would end. When Pearl Harbor happened or the Stock Market crashed, no one knew the ending. That’s the benefit of hindsight: we know how it turns out, and sometimes, we can just marvel at their fortitude.

But one of the things even I as a historian rarely studied was the Spanish flu epidemic of 1918-1920. Sure I knew about. I reckoned early on in 2020 that if the flu could sweep over the globe in an era without planes, Covid-19 would surely and easily wash over all of us.

I forgot where I heard it amid all the things I’ve read and heard about the 2020 pandemic and how it relates to the 1918 pandemic, but one of the facts that bore into my consciousness and stayed there is this: you, me, and everyone you know who is alive in 2020 to experience Covid is alive because an ancestor faced the 1918 flu and survived. Those folks a century ago did what they had to do to survive and endure and get through that historical event, and so did we.

We endured. We persevered. But holy cow did it hurt.

I don’t know about y’all but I teared up and cried many times throughout this year. My son was a high school senior class of 2020 and had his senior year shattered. All those things you and I got to experience was lost to him. All our fellow citizens the world over who lost jobs, lost businesses, lost dreams, and lost hope. I pray for them and shed tears for them.

And then there are the deaths. Over 315,000 people in the US have died because of this damn disease. For every one of them, they had families who saw an empty chair at birthdays or Thanksgiving and next week, they’ll see it again at Christmas. The pangs of grief for these people is something I can only imagine. The news was relentless when it came to Covid. Throw in the election and the Black Lives Matter reckoning and 2020, the year that was supposed to start a brand-new decade brimming with promise just dragged us down day after day.

But there were always signs of resiliency. Remember back in the spring when New Yorkers banged on pots and pans to lift the spirits of the healthcare workers? What about the family in north Texas who began making PPE because they wanted to do something? For ever piece of bad news we heard, there slowly began to be good news, small stories of humans helping humans. Kindness being shown to strangers, even if we’re supposed to stay six feet apart and wear a mask everywhere we go. Because in times of great stress and turmoil, our goodness for and about each other can blossom.

Who would have thought that a video of a nurse in New York getting the Covid vaccination this week would have brought tears to my eyes? It did. For my wife, too.

And we’ll be able to commemorate our endurance of 2020. We’ll be able to celebrate the good things that happened this year, the personal ones as well as the community ones.

We’ll be able to talk about the things that got us through: my newfound love of my local library and the ability to sync with my ereaders, the albums we heard—a banner year for music—the TV shows we watched, the books that were published—like our own S. A. Cosby and the awesome success of his novel BLACKTOP WASTELAND—and the books that were written and will be published in 2021. In that last category, Claire Booth has a new novel debuting on 5 Jan 2021 (it’s already available in the UK) and yours truly will also have a new novel in early 2021.

There are always signs of hope and optimism. They are the reward for our endurance.

We here at DoSomeDamage thank you for your continued patronage of our little experiment. We thank you for the community surrounding us and including us in your lives week after week. We’re going to take a couple of weeks off to see 2020 out the door and welcome in a new year. We’ll be back with regular columns on 9 January 2021, but be sure to check back earlier that week for Claire’s post about her new book FATAL DIVISIONS.

Happy holidays from Beau, who takes a look at Laird Barron's BLACK MOUNTAIN 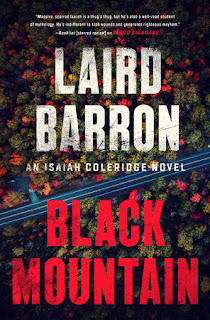 Ex-mob enforcer Isaiah Coledrige has hung out a shingle as a private eye in New York’s Hudson Valley, and in his newest case, a seemingly simple murder investigation leads him to the most terrifying enemy he has ever faced.
“Isaiah Coleridge [is] an intimidating presence…A big bruiser who likes nothing better than a good fight.” —The New York Times Book Review“Things get downright hallucinatory as [Coleridge] proceeds toward a climax that seems as much Bram Stoker as Lawrence Block. [A] supportive librarian-girlfriend and a loyal partner-in-arms give the p.i. the emotional backup he needs to return (no doubt) for further bizarre adventures at ‘the mysterious intersection of coincidence and fate.'”—The Wall Street Journal
Get it
Posted by Steve Weddle at 2:20 PM No comments:

The Beckoning Fair One

During the winter, when the days darken early and the nights are long, do you enjoy reading horror fiction? I certainly do, and I have to say I especially like reading ghost stories in the classic mode, atmospheric tales by people like M.R. James, Sheridan LeFanu and Edith Wharton.  In all honesty, it hasn't gotten that cold yet in New York City, but the sun does set early and the nights last a long time, and I started to feel the itch recently to read a ghost story of the type I'm describing.  I chose one that I read many years ago and have long wanted to re-read, "The  Beckoning Fair One" by British writer Oliver Onions, a story first published in his collection Widdershins in 1911. 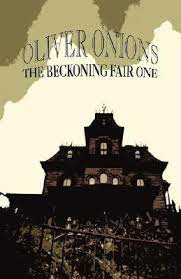 "The Beckoning Fair One" is among the most anthologized horror stories ever written, and once you read it, you understand why. Novella-length, it tells a relatively simple tale about a writer named Oleron who moves into an empty house in London and slowly, inexorably, goes insane.  In one sense, it's a haunted house story, a very creepy one, but along with that, it's a masterful psychological study, and indeed, it is in the realm of the psychological ghost story that Onions shines.  In the history of supernatural fiction, he played a large part in pushing the ghost story's evolution forward with his emphasis on deep but subtle characterization and psychological realism.

Onions' forte was what for horror critic and publisher Williams Simmons calls "the intimate relationship between 'creating' and mental instability."  Continuing, Simmons says, "His characters often get lost in their own creations.  The artist, the sensitive being, always runs the danger of complete and soul effacing mental absorption.  The creative process is only one thin line away from self-destruction."

"The Beckoning Fair One" explores this idea thoroughly.  It's never entirely clear whether Oleron, struggling with a novel that is way overdue to his publisher, is dealing with a malign presence in the house or having a psychotic breakdown.  Ambiguity is well maintained.  At first Oleron has a close woman friend, of flesh and blood, who is urging him to finish his novel, but as the tale progresses Olerun withdraws more and more from his friend and becomes increasingly drawn to the house's apparent feminine presence, the Beckoning Fair One of the title, who seems to be telling him to burn his unfinished manuscript and start a new one from scratch, with her, not his friend, as a central component in it.  That the house is an ordinary building in London, not some isolated Gothic mansion somewhere, adds to the story's plausibility.  This could just be a story of a reclusive writer slipping into full blown agoraphobia, going mad at his inability to finish his novel.  At one point, he thinks something that has popped into the head of many a person who has toiled away for years at scribbling.  Was all the work and effort worth it:

Yes, he was himself, Paul Oleron, a tired novelist, already past the summit of his best work, and slipping downhill again empty-handed from it .all.  He had struck short in his life's aim.  He had tried too much, had over-estimated his strength, and was a failure, a failure...

Would he have been better off, he wonders, had he chosen "the wife, the child, the faithful friend at the fireside"?  That he might have tried to find a balance between devotion to art and family life doesn't seem to have been an option to him, but then again, there are a lot of writers like that and the balance in question, even when tried, is not so easy to accomplish.

I'd rate "The Beckoning Fair One" among the best and most timeless supernatural tales I've ever read, and it is perfect for a frigid and starless winter night.

The story, by the way, was made into a movie in 1967, with Franco Nero and Vanessa Redgrave. The film is A Quiet Place in the Country, an Italian film directed by Elio Petri (the same director who made the great Investigation of a Citizen Above Suspicion).  The film changes the setting to a villa in the countryside and is much more florid and baroque in tone, as well as more sexual and violent.  But it works.  Call it a loose adapation.  Set in then contemporary Italy, the movie has a Pop Art look and is gorgeously shot, and it leaves you unsettled and disoriented.  It's the kind of film you want to rewatch after seeing it once.

"The Beckoning Fair One" and A Quiet Place in the Country make an effectively disquieting story/film double bill. 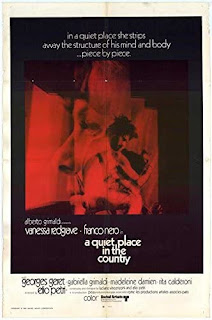 Posted by scott adlerberg at 10:34 AM No comments:

I Wish You a Zoomy Christmas 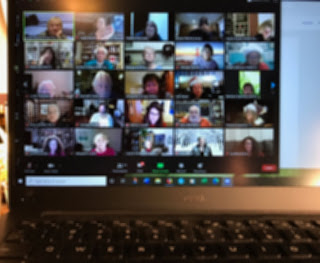 It's a party, circa 2020. And it was lovely. About fifty people from the Northern California chapters of Sisters in Crime and Mystery Writers of America got together yesterday afternoon for cocktails, chocolate tasting, and chat. You had to bring your own, but everyone expected that. We got some writing tips, and thanks to Gigi Pandian showing us her keyboard/typewriter/coolest thing ever, I now know what I want from Santa.

But back to how we socialize at this moment in time. I set an alarm on my phone so I wouldn't forget. I kept my comfy pants on. I wore my slippers. And even with that appallingly easy amount of preparation, I had to force myself to sit down for it. Not because of the activity, but because of the delivery mechanism. I'm Zoomed out. But I'm really glad I put my butt in the chair. It was wonderful to see friends and have some fun.

So yes, I learned my lesson—don't be a Scrooge. So from me, virtually and otherwise, Happy Hanukkah, Merry Christmas, and Happy Holidays.