I’m a sucker for anniversaries and commemorations. It’s probably an offshoot of my love of history or, rather, perhaps my love of history makes me keenly aware of dates and things. Ten years ago this summer, my family and I took a vacation. It was on that vacation that I began writing what would become my first novel. It’s called Treason at Hanford and it features Harry Truman as the protagonist.

Not knowing how to write a book, I fell back on my experience writing my thesis. A key to that endeavor was a common file in which I kept the status for my professor. I figured if it worked for a thesis, it should also work as a novel. I did not want to take my laptop—vacation, remember—so I bought a good, old-fashioned composition book. I also brought some post-it notes, pens of many colors, and a pencil. 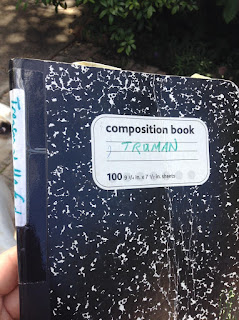 Ten years ago this coming Monday, 27 July, I started. It was a brainstorming session. I had the vision of a single scene. This scene was crucial and I made a decision that has led to a pattern ten years on: I would write all first drafts chronologically. This scene took place later in the book. With my copious notes and in this comp book and obsessive dating, I finally got to that scene on 21 May 2006. It was a long wait, but it was oh so earned.

I have read through this comp book/journal more than once in the past few years. I go back to it when I was feeling particularly discouraged in 2008-2013. You see, while I wrote this first book from 27 July 2005 to 1 June 2006, I didn’t start and finish another long project until May-June 2013. In these years, I used to joke that it’s taken me longer NOT to write my second book than it did to write my first. That was a bad stretch, I’ll admit, one in which I dreamed about writing and wrote about writing much more than actually writing.

That last thing was something I swore not to do once I started back up in May 2013. I us

And I’ve rarely done it since. In the past two years, I’ve started and completed seven longer projects and I’m not sure how many short stories. Maybe I needed the discouraging time to get me going. I don’t know. There are days, here in 2015, when I wonder what my professional author life might have been if I had actually completed books from 2006 to 2013, but I don’t dwell there. I see 1 May 2013 as my Writer’s New Year’s Day. That was the day I decided I would pick up the pen again, write, and complete things.

And I’ve not looked back since.

But it all started ten years ago on Monday. 27 July 2005. One of the most important days of my writing life.

So, do y’all have a specific date that you can point to and say your writing career started on that day?
Posted by Scott D. Parker at 1:00 AM 1 comment:

Email ThisBlogThis!Share to TwitterShare to FacebookShare to Pinterest
Labels: the writing life

As they used to say on the Fat Albert television program:
You're like school in the summertime -- no class.

And yet, here's a class. 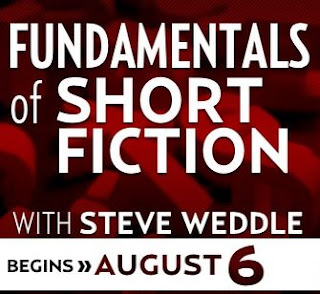 Pass the word, friends and neighbors. I'm back at LitReactor, starting August 6. Fundamentals in Short Fiction is 4-week class discussing character, plot, setting, dialog and all those elements you need to build an effective story,

Goals Of This Class

You don't always need an MFA for writing. Wait, MFA? Who said MFA? Oh, that's right. I did. I have an MA and and MFA, so I was ripe for the picking, it seems. Lisa Ciarfella and Elaine Ash chatted me up about the MFA program. To MFA or Not

Neither degree has been a golden ticket for anything I’ve done. The biggest benefit I got from the MFA was finding a group of like-minded people who were passionate about the same things I was. You think anyone at my office today wants to talk about whether Gordon Lish’s influence is what made Raymond Carver a great writer? About whether opening with straight dialog is a risk? About open endings in short stories? Heck, no. But the people I went through the MFA program with me STILL DO. I’ve got a dozen or so friends from that time who are still adamant about stories.Essentially, we created a network of readers and writers that we’re still involved with. It’s pretty damn glorious. >>

I'm gonna cheat on my post a little this week by directing you here: 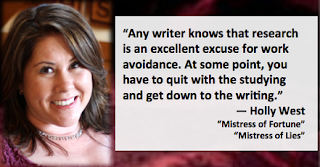 Author S.W. Lauden interviewed me for his website this past week. Not only to I appreciate the screen time, I appreciate his patience when I accidentally missed the deadline for sending in my answers.

The interview aside, I'm happy to have met Steve last year at a literary event in Los Angeles. In addition to the numerous short stories he's had published, his novel BAD CITIZEN CORPORATION comes out in October and a novella, CROSSWISE will be published by Down & Out Books in 2016. Plus he's just a lot of fun to hang out with.

In other news, the Outrage Machine in my social media feeds seem to be working overtime lately. It's a big bummer. I know we don't live in a perfect world but re-posting simplistic and potentially offensive memes on Facebook doesn't strike me as a particularly good way to handle it. I've had to unfollow a few people this week just because the noise gets so tedious.

Sure, I might disagree with your positions, but if you take a moment to express yourself in a well-thought out way I'll respect your efforts and maybe even see your point of view. But re-posting some idiotic image from the political group of your choosing is just annoying.

One last thing: I started reading TO KILL A MOCKINGBIRD for the first time last week. I've never read a book that used the N-word so freely. I know it's reflective of the casual racism that existed at the time it takes place in, but I find it so jarring. Which isn't to say I'm not enjoying the book--I am.

That's it for me. If you have any random thoughts to share on the above topics or others, please feel free to do so in the comments.
Posted by Holly West at 3:00 AM 2 comments:

I'm not a Festival Girl.

I spent time this weekend at my small little table at an Italian American festival, accosting strangers who stopped to look at my books. It sucked.

Sure, I sold some books.

Yes, I enjoyed meeting everybody who stopped by to chat.

But I've decided that spending ten hour days at a festival to promote myself is a nightmare.

I'm no Jessie Chandler. That woman is a natural promotion machine.

At Printer's Row in Chicago, she not only sold passersby her own books, she sold them mine, as well.

So this leads me to believe that selling books at a festival is not inherently evil, it's just not for me.

I can tell people about my books but it still makes me uncomfortable.

It exhausts my introverted nature. I left with a raging headache and a desire to sleep 20 hours in a row.

So that is the first and last festival I will attend as an author.

What about you? Do you like meeting authors at non-book event festivals? What about you authors, is it hell on earth for you, as well, or do you like it?
Posted by Kristi at 3:00 AM 9 comments: