Time-Traveling with the Justice League

Summer being summer, I often take time to remember past summers and past vacations. The summer of 1982 peeked itself out of my memory recently when, of all things, I listened to the Fatman on Batman podcast with Brad Meltzer. At one point, Meltzer mentions his first comic book being one of the annual crossovers between the Justice League of America (JLA) of Earth-1 and the Justice Society of America (JSA) of Earth-2. That got me to thinking that those crossovers typically landed in the summer months. It was the Big Event in Comics before they made comic book movies.

I have read many of those crossovers throughout the years, but the one that really sticks in my mind was the giant JLA/JSA crossover of 1982. This story, “Crisis on Earth-Prime,” was so huge, that it included a third team: All-Star Squadron. The five-part tale spanned two titles: JLA for three issues and All-Star Squadron for two.

A quick note for folks who don’t know how these things work: the JLA lives on Earth-1. They are the heroes you know: Superman, Batman, Aquaman, Flash, Green Lantern. The heroes of Earth-2, the JSA, are those we originally saw in the 1940s: Starman, Hawkman, the Green Lantern with a cape, the Flash with a helmet. Both of these groups live in their respective 1982s. The All-Star Squadron, however, are heroes whose main stories take place in World War II. There’s a bit of retconning in there, but it doesn’t take away from the story. These heroes are Johnny Quick (another “Flash”), Firebrand, Liberty Bell, and Steel. Earth-3 is an earth where only the villains have super powers. Their group is the Crime Syndicate and they are all parallel versions of main heroes. Earth-Prime is our earth, the earth where heroes like this exist in comic books.

Anyway, not to get too deep in the weeds here or nothing, but the saga starts with the JLA about to meet their JSA friends…when the Crime Syndicate bursts out of the time rift machine and takes out all the JLA. What makes this a neat idea is that the JLA put the Crime Syndicate in an inter-dimensional jail back in the 1960s. So, if you read this issue in 1982, you had a reference to events that happened 20 years in the past.

There are lots of time shenanigans that go on in this story, but the main villain is Per Degaton, a Hitler-like depot who convinces the Crime Syndicate to steal the nuclear missiles from Earth-Prime’s 1962 (thus causing World War III there) and bring them back to Earth-2 in 1942. (Get that?) Degaton is a real villain who first made his appearance in comics in 1947. Not giving away anything here since this is a thirty-year-old story, but the ending of the entire tale is very reminiscent of “Back to the Future.” Because the heroes win (shocker!), time is set right. I found the ending to be quite satisfying in that there was a great adventure that no one remembered.

The fond memory I have of this story arc was from the summer of 1982. My dad, great uncle, and I traveled to Alaska to fish. I was fourteen and loved comics more than fishing. One of these five issues was left on the plane. I saw it and immediately was captivated by the cover. I love those old roll call covers you see there. I knew the big crossover was due, but hadn’t seen it yet on the spinner rack down at the 7-Eleven. Seeing that issue was all I needed to know: the big summer event was here. Now, I just had to find the other four issues. Ah, life before the specialty comic stores or the internet... 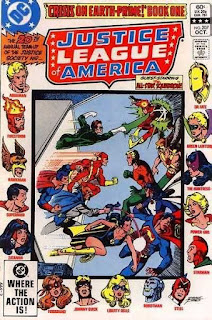 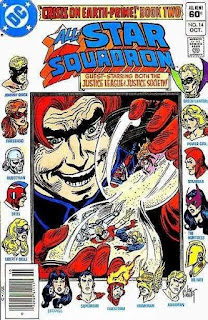 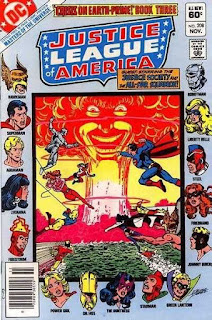 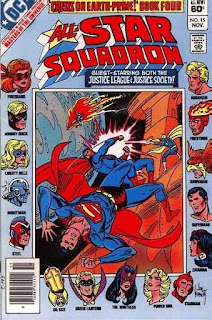 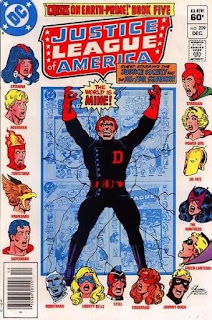