Writing in a Vacuum and Other Stories

So the Oscars happened. I haven't seen Green Book so I'm not going to comment too much on the Academy's choice of it as the best picture of 2018, but they don't exactly have a great track record. (I was disappointed in Green Book upon announcement, because it uses the name of Victor Hugo Green's book for black people to travel safely--in the north as well as south--in '60s America without telling his story, which deserves its own movie.) What I will talk about is the argument that you should judge the art, not the artist, and the desire to somehow write in a vacuum. The artist will always be judged. Period. I'm not going to argue whether it is wrong or right, or whether you should or not. It is a simple fact. The only way to not be judged is to remain anonymous or in obscurity until your death, and then they'll judge your bones. It's what people do.

The writer who has come closest to anonymity and fame  of late is Elena Ferrante, author of the Neapolitan Quartet beginning with My Brilliant Friend. And I may have missed her being outed; I recall there was some scandal about her "real identity" and I didn't read it, because I don't want to know who she "really" is. I read My Brilliant Friend and enjoyed it, but I haven't read the rest of the books yet. They are intense, and I will finish them sometime. I should probably jump on it before someone reveals her identity to me.

I can be stubborn about reading classics and beloved books. I finally got around to reading William Faulkner, which I somehow avoided despite taking AP English in high school and completing an English degree with honors at Rutgers University, so I get around to these things eventually. I had read Faulkner's Knight's Gambit stories and found them mediocre, but Sanctuary was quite good. Joyce Carol Oates nudhzed me into reading it, and I think she's disappointed that I didn't crow about it. It's a great book, sure. Disturbing, and sort of the flip-side to To Kill a Mockingbird, with Horace Benbow sitting in for Atticus Finch, and being much more human. It begins in media res and you have to piece it together, and while I enjoyed his portrayal of hypocritical small-town mores, his structure made it a bit of a chore. Faulkner called it a potboiler after the critical response. 1930's America wasn't ready for a dose of ugly reality. It's still shocking today.

I read a good post by writer Joseph D'Agnese about the power of Sleep. He's not the first to talk about the benefits of sleeping on a plot problem or other writing block, but he's talked to sleep doctors, and The goal of sleep is to organize your thoughts and consolidate learning. Americans are chronically under-rested, so this says a lot. Get your sleep in. When you have a problem, sleep on it. Use a sleep app to measure how much sleep you are getting, if necessary. I had a big sleep debt from sleep apnea, and I am still very sensitive to lack of sleep. I get cranky, unfocused, gloomy. I watch for it, and I go to bed super-early when I see it happening, to head it off. You'll be surprised how a few good nights' sleep will improve your outlook. Try it.

When you're not sleeping, you can go to events like Noir at the Bar Hoboken. Jason Pinter, publisher of Polis Books, gathered a great bunch of writers at Mulligan's pub in Hoboken, in stumbling distance of the PATH train. The bar is an ungentrified old school pub that gave him the back room, and it was packed Sunday night. Readers included Jen Conley, Kellye Garrett, Ed Aymar, John Vercher, and Jim Fusilli. It was a great night, and I hope he does it again soon. Club soda and lime is free, and five bucks for curry fries? I might move in! The Guinness is poured well and at seven bucks ain't too bad. It's around the corner from Little City Books, a nice shop that does keep a strong mystery section, and they sold books at the event. It was a good time, and I hope to see you there for the next one. John Vercher, whose book Three Fifths comes out from Polis Books this year, read from a work in progress about a beat-up fighter who finds a body in his trunk and doesn't remember how it got there. Can't wait to read the rest of that one! 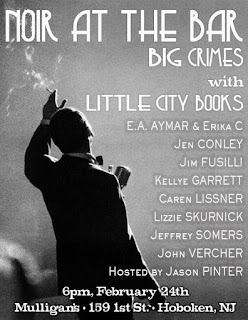 Speaking of Jen Conley, her YA novel Seven Ways to Get Rid of Harry is wonderful. If you read her story of the same name in Protectors, she has expanded it into a great little book. She brought me back to my childhood with this gripping debut. Danny Zelko battles with his mother's abusive boyfriend amidst the helplessness, confusion, and tumultuous friendships of his formative thirteenth summer. Sometimes harrowing, often funny, this is a great and necessary read for anyone who wants to understand what it's like for boys in that liminal stage, when faced with the challenge of a bad role model. It's available for pre-order from Down & Out Books. 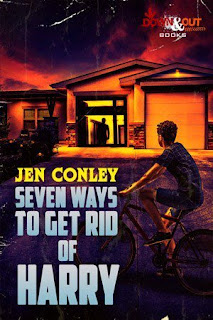 This year, the real stunner of a book will be The Border, by Don Winslow. Following his breakout crime novel The Power of the Dog and the epic sequel The Cartel, this finale creates an American drug war trilogy to challenge the L.A. Quartet. Arturo Keller is now head of the DEA and has a chance to enact real change, but as a man of vindictive obsession, he wants to take out the money men who keep the cartel alive by allowing them to launder their cash to fund real estate around the world. He retains the epic sprawl of the second novel but tightens the narrative so the story burns at a feverish clip, like we are bingeing a NetFlix series. And as always, he is unafraid to stare into the abyss of our own making, asking why Americans need more painkillers than the rest of the world. Drugs come across our borders because we want them. 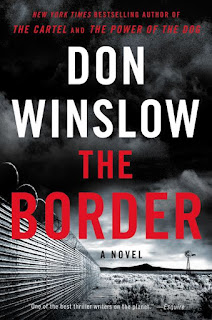 Coming from a family that's no stranger to the drug war--one cousin lost, others saved after what felt like endless stumbles back into hell--I thanked Don Winslow for his sympathetic portrait of addicts, migrant children fleeing the gangs our money created, police who destroy their souls working undercover, and their superiors who have to make impossible decisions. He spares no one: the Italian mob, street gangs, the cartel, the bankers and lawyers and politicians who protect their money, and the system itself, which generates billions in jobs to run in circles chasing drugs when we know how it gets here and why. It doesn't get smuggled up a mule's behind in the desert by migrants looking for a better life, it rolls in on tractor trailers, one every 15 seconds. When I worked at the shipping terminal, one of our vendors built gamma ray scanners that were supposed to quickly scan those trucks for bodies and contraband as they rolled through the border crossings. Sometimes they work, if a bribe isn't involved. 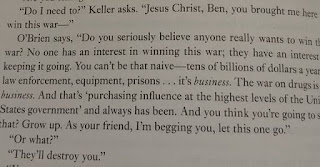 The ARC of The Border is 711 pages and I read it in under a week, in hundred-page marathon sessions, forcing myself to put the book down. Winslow is in full mastery of his voice here, and conjures fully-fleshed characters from the earth like planted dragon's teeth. I won't forget Jacqui, Nico, Detective Cirello, Marisol, Belinda "the Fosfora" and many more. Coming from the "red wedding" of dread that was The Cartel, I was pleasantly surprised to find closely guarded hope in this novel, as Keller walks face first into withering fire to save everything he fights for. I can't say enough about this one. It had the chance to stumble into parody or lose its head. I enjoyed The Force, but wasn't satisfied by its conclusion. The Border earns its ending with plenty to spare.

Back to the Oscars. Instead of decrying the Academy's choices--it's funny how Americans keep getting shocked by how conservative voters can be--I'd rather talk briefly about the movies I did like.
So instead of 88 lines about 44 women, I give you 30 lines about 15 movies. (Remember that song? It's a rather brilliant one-hit wonder by The Nails)

The Wife stars Glenn Close, the real Nobel winner
She's sick of pretending, and guts her hubs for dinner.
In Leave No Trace Ben Foster is a vet living rough,
His daughter is sick of woods life, and gives him some tough love.
If Beale Street Could Talk, it would break your heart.
This old story's sadly fresh as ever, the film a work of art.
You Were Never Really Here, improves upon the novella.
Lynne Ramsay gives the girl some agency, and she saves Joaquin-fella.
Roma packs a lot of history into its gorgeous frame,
Cuaron breaks Mexican taboo and gives indio Yalitza Aparicio well-deserved fame.
Sorry to Bother You is too weird to get an Oscar but see it anyway.
It spoofs office work and Amazon and will make you laugh and neigh.
BlacKKKlansman by Spike Lee tells the story of a black cop who
Busted up a klavern, and spied on civil rights activists too.
Annihilation is the Space Odyssey of this millennium,
It will stun you with fractal visuals and make you wonder who's the alien.
First Reformed with Ethan Hawke has a lot to say of men
Who get obsessed with religion, and let others martyr them.
Black Panther was a blast, Wakanda bright and new
It made me give a damn about heroes in underoos.
The Favourite is brilliant, vulgar, and full of dastardly deceits.
The royal court is vicious both in the sheets and in the streets.
Blindspotting was overlooked, a daring tale of Oakland movers
If gentrifiers don't get them killed, they might live to drive for uber.
Mandy you will love or hate, a living heavy metal album cover.
Nicholas Cage chews the scenery to avenge his murdered lover.
Bird Box was better than A Quiet Place, its monsters won't get old,
If you scare easy, you might want to watch through a blindfold.

Thanks for the Jen Conley recommendation. I'm definitely going to pick that up. And I agree on many of your movie shout-outs. And I absolutely think Spike Lee should have won over Green Book for Best Picture.