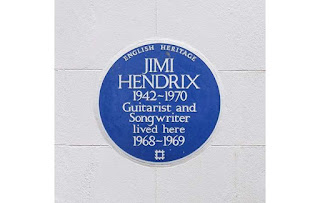 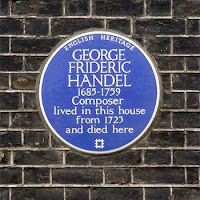 In Brook Street Mayfair in London there are two houses at numbers twenty-three and twenty-five. They’re big flat Georgian fronted brick buildings, and on each of them there’s a blue plaque.

The plaques – for those who aren’t familiar with the idea – are placed on buildings by English Heritage to identify places where important people once lived or worked or stayed, and the two plaques here commemorate the fact that number twenty-five, George Frederic Handel lived and worked while next door to him (though, admittedly, some years later) Jimi Hendrix made music, got wasted, and became a rock Icon.

And I’m struck, every time I pass the place, by the juxtaposition; by the idea of the ghosts of the two men – Handel and Hendrix - artistic geniuses in their own right, hanging out together, of Handel and Hendrix bickering “Call that music? It’s a noise. Nothing more!” “Cat, chill the fuck down. And shorten the pieces. Aint nobody got time for all that Baroque nonsense.”

I’ve got a book out at the moment. It’s called Death of an Angel, and it’s the fourth book in my series featuring Danny Bird, an average Londoner who – through events way too convoluted to detail in this post – has ended up running the world’s grimiest gay bar, working for a local gangster, sleeping with a closeted gay copper, and solving murders as a sideline.

And I like the idea of Hendrix and Handel hanging out together because I’m fairly sure that Handel would have thought Hendrix was a fraud, a charlatan making noise and trying to pass it off as music, and that thought – the idea that George Frederic Handel’s opinion would have been wrong – comforts me greatly every time Carrie’s mother kicks in.

You know Carrie’s mother, right? Piper Laurie in the movie of the Stephen King book? Maureen McGovern in the original Broadway cast of the musical (oh yeah, there was a musical. Written by the same people who wrote “Fame (I’m gonna live forever)”. It was in the eighties, and a lot of things were different then. Like, we thought Ollie North was the most treasonous any US Politico would ever get. Happy times.)

Anyways, Carrie’s mother: There she is, her voice wheedling and sneering. “They’re all gonna laugh at you,” she says. “They’re all gonna see through you this time.” And every time I’m terrified. What if she’s right? What if I’m fooling myself? What if my books are shit, and my talent is for self delusion not literature?

What if the fact I’m not on the shelf at Waterstones or Barnes & Noble means I’m a failure at this thing? What if the fact that my friends have TV Deals and glittering launches makes them better than me? What if, in fact, they are all laughing at me?

My books languished in a drawer for years cos I was so afraid of this derision that I’d become convinced that nobody would ever read let alone publish them. It took, to be honest, one of those staring into the abyss moments for that to change.

My mother was dying. And I couldn’t stop it. Me, who had always been a fixer, a creator, a make-do-and-mender. And this was going to happen no matter what I did, no matter how desperately I tried to avoid it.

And – well, not to put too fine a point on it – I had a bit of a breakdown. Not a Carrie White level breakdown, but a crisis. Of faith in living. Of Belief that there would ever be Joy again. Of self: If I couldn’t fix this, then what was the point of me?

So I ended up in therapy (I highly recommend it, by the way, if for nothing more than as a way of getting someone’s undivided attention for forty-five minutes at a stretch whilst getting to talk all about YOU) where my therapist noticed how I lit up when I talked about my books, and asked why I wasn’t more actively pursuing publication.

And finally, after a lifetime, Carrie’s Mom spoke her truth.

And I – with my therapist’s help – told her to go fuck herself.

And so I sent out my book about a gay private eye that nobody would ever publish, and an agent sent it back saying it was too gay, too arch, too camp, and too ‘not one thing not another’ to ever get interest from mainstream houses.

But a rocking new indie press loved it, and loved it enough to want to publish it (that’s a whole ‘nother post).

And straight away, Carrie’s Mom popped back up:

Not good enough for a mainstream publisher. Ergo, not a proper writer.

Can’t get into shops ‘cos it’s an Amazon exclusive. Ergo, not a proper author.

Just someone playing at the fringe.

But I’m four books in now, and each one’s selling better than the one before. The one that that agent judged unsellable? Just paid for my next vacation.

On publication day last week, people were messaging me demanding to know why the new book wasn’t on Amazon by Lunchtime (Bezos clearly too busy with his cameraphone), and readers were sending me screenshots of their purchases in Mexico and Athens and New York City. And bloggers and authors – people whose work I love and whose taste I respect – said lovely things about Death of An Angel. And my readers devoured the book.

That agent was right. To an extent. The Danny Bird books are gay, arch, camp, and not for everyone.

But the people who they are for – the people who buy them in countries on the other side of the world, or who buy them around the corner from where I live, who read them on the LIRR as they head into the city, or on the Tube as they commute to work, who send me Tweets with casting suggestions for the inevitable TV Series <casts eyes to heaven> - those people love them.

The book opens with a woman’s body being discovered. She’s clearly plummeted from a nearby tower block, but the age old question remains: Did she fall, or was she pushed?

And as my publication day buzz was still pounding those endorphins through my veins, someone sent me a link to the 2019 announcement in the UK of a prize that will be awarded “to the author of a novel in the thriller genre in which no woman is beaten, stalked, sexually exploited, raped or murdered.” I’m not linking to them or naming them, because frankly Carrie’s mother gets enough publicity without me adding to the chorus.

Please don’t get me wrong: There’s a lot of bad writing out there. A lot. Like, a metric shit ton of it. And sadly there’s a lot of torture porn too. But something like this – something which (firstly) uses the term “Thriller” to encompass all crime / genre writing, and thus stinks of 1950s prurience (like the lower orders only read for the ‘thrills’); and which seeks, in a misguided attempt at removing from the library that bad writing, to proscribe how authors and their readers see and reflect the world around them; and which, in its wording, suggests not only that even women’s expression of their own lived experiences should be censured but that in some way the beating, stalking, sexually exploiting, raping or murdering of men is fair enough – is Carrie’s Mom in an award form.

It's George Frederic Handel sitting on a panel telling us that what we have made is not music; it’s noise.

Maybe there’s a place in the world for Baroque and Jazz and Rock and Pop and Punk, for Opera and for Showtunes.

But you know what? It’s our noise; and these are our songs.

And the next time Carrie White’s mom pops up, we should remember that, then put her right back in her box.

Because without our songs, there is only silence. 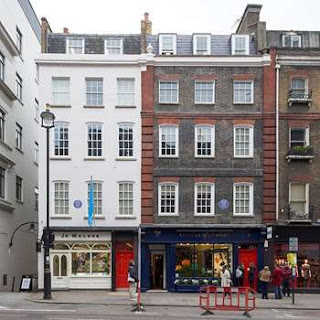 Derek Farrell is the author of Death of an Angel and three other Danny Bird Mysteries.

The books have been described as "Like the Thin Man meets Will & Grace," like MC Beaton on MDMA," and - by no less an expert than Eric Idle - as "Quite Fun."

Farrell is married and lives with his husband in West Sussex.

They have no goats chickens, children or pets, but they do have every Kylie Minogue record ever made.