Tis the Season for Genre


By Claire Booth
It’s that time again. Holiday gift shopping. And it probably comes as no surprise, but I tend to give books as gifts. A lot. So I always peruse those holiday recommendation lists in generalist magazines and newspapers. And then I throw them out.
Because, really, how many literary novels or enormous coffee table books can one person be in the market for? The lists are pretty and prestigious, but they’re not practical as gift-giving advice. Because what do people really read?
Genre.
Crime fiction, science fiction, horror, romance, fantasy, western. Some people stick to one. Others freely admit to loving several. But their tastes are rarely – if ever – factored in when it comes to the gift lists in general publications. Genre is the dirty little word they won’t talk about.
To me, these lists should have two purposes. The first is to introduce people to books they might not otherwise know about (say, if there was a new ten-pound coffee table pictorial history of hard cheeses). The lists usually achieve this. The second goal should be to also recommend books that people would actually be interested in reading.
Forget about it. They don’t do it.
And this, especially to me as a former reporter, is just shoddy reporting. The list-makers should be examining the tastes of the book-buying public. It might be difficult and time-consuming and – oh, wait. 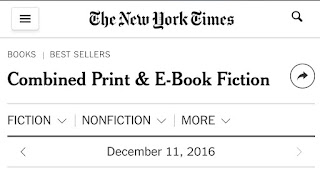 Bestseller lists. There are several, easily obtainable by pretentious listers and anyone else with an internet connection. And they all say one thing. Genre rules.
The most recent New York Times bestseller list for combined print and ebook sales has nine genre books in the top ten – one romance and eight EIGHT! crime fiction/thrillers. (The same thing held true the week before, with an adventure novel replacing the romance.)
And this trend has existed for a long time. People are putting their money where their bookcases are. They like genre novels. A lot.
So I’m going to go out on a limb here and bet that the kinds of books people buy are also the kinds of books they’d like to receive. That's the point of a gift, right? It should be the point of a gift recommendation list, too.
Posted by Claire Booth at 3:00 AM