On the weekend, the boy started his pottery classes. Brian got a great video of him, at the wheel, with his instructor, working on shaping the clay. 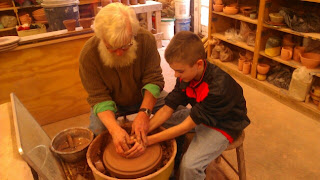 A little too much pressure, and the mold broke.  The instructor said not to worry, everything was fixable.

And they started again, from scratch.

Joelle might phrase it by asking how you know when it's time to stop tinkering.

Now, the truth is, sometimes there is no right or wrong answer, but that's not a very helpful answer.

For me, when you're working on a scene, there are certain things to ask yourself.

#1.  Does the scene reveal what I want it to reveal about the character?  Does it accomplish the job I've set out to do with this scene?  Do I unintentionally say things about a character that I don't want to suggest?  (This becomes an issue with writers who are trying to force characters into a plot that isn't a natural fit for them, and are using them as placeholders rather than letting them take on their own life.)

#2.  If the scene's focus isn't character, the question is whether it advances the plot in the way you intend (or contributes to the overall story development by setting the scene).

If you're torn between going in a few different directions, and both options serve the purpose of #1 or #2, or both, then it may come down to an artistic choice.

Sometimes, you need to have the ability to see four or five steps down the line.  Ask yourself what the logical result of option A is, and then compare it to option B.  And then get your big girl panties (or boxers) on and make a decision.

And remember, everything is fixable, until the book goes to publication.  For newer writers, this process may not have settled, and it's more likely that you'll do more rewriting, because you're learning so much about the mechanics of writing, as well as plot and character development.  As you go through the editing process on manuscripts, you'll start to know what to look for as you go, and hopefully, it will make the rewriting process a little more bearable.
Posted by Sandra Ruttan at 3:00 AM