“Clerks III” is Kevin Smith’s latest film, coming twenty-eight years after his debut movie, “Clerks.” Being the pop culture geek that I am, folks are surprised to learn that I only started watching Smith’s films 2019. Up until then, he was only a podcaster (and that only since 2012). So, in 2019, leading up to the release of Jay and Silent Bob Reboot, I watched all of Smith’s films, reviewing and ranking them all.

What makes my viewing of these films interesting is that I am in my early fifties rather than the younger person I was had I watched these movies in real time. As a result, they strike me differently (just look at my favorite Smith film). I have a much longer review of “Clerks III” on my own blog, but

I have a much longer review of Clerks III on my own blog, but I want to touch on one aspect here. It’s a storytelling technique I found incredibly brave that yielded an incredibly emotional reward. But to do so, I have to spoil the ending. You’ve been warned.

The Origin of the Famous Quote

A running gag in Clerks was that Dante, one of the two main clerks, came into work on his day off. Played by Brian O'Hallaran, Dante just seemed to sigh and roll his eyes as he had to deal with annoying customers who came looking to buy whatever crap they wanted. To just about everyone, he kept lamenting that “I’m not supposed to be here today.” To all of us who had to work jobs like, boy could we relate.

In Clerks II, it’s one of the closing lines of the movie. As Dante and his best friend, Randal (Jeff Anderson) stand behind the counter of the very same Quick Stop convenience store they now own, Randal says, “You’re not supposed to be here” in an echo from Clerks. Dante replies with “It's the first day of the rest of our lives.”

The main story of the movie is that after Randal has a heart attack, he decides to do something creative with his life and make a move about his life. Basically, he decides to make Clerks. But it’s not all sunshine and rainbows, despite all the in-jokes and winks and nods to the actual movies Clerks and Clerks II.

With the latter two Clerks films, Smith broadened and deepened the love and friendship between Dante and Randal. They are, to use Smith’s term, hetero lifemates. Randal finally realizes how much Dante means to him after Dante himself succumbs to a heart attack. Unlike Randal, however, Dante doesn’t survive.

I’m not sure how many of the folks in my theater were crying when Dante died, but I sure was. Heck, my voice broke a couple of times when I later told my wife the events of the story. Yes, I cry at a lot of things, but these movies and these characters, even over just three years, have come to represent something. I think lots of fiftysomething folks, guys especially, find pieces of themselves in the lives of Dante and Randal.

Now, in Clerks III, at Dante’s funeral, it’s Randal looking down at his friend’s coffin for the last time and he laments that he [Dante] isn’t even supposed to be here [at his own funeral] today.

No one will be able to watch any of the Clerks films—or wear the quote on a t-shirt or see it on a coffee mug—without thinking of how this one simple sentence has had its meaning changed after nearly thirty years.

That’s a fantastic piece of storytelling.

This week Beau takes a look at Dead Dogs from Manny Torres.

Two Atlanta misfits in debt to notorious dog fighter and drug dealer Boots Tumbler are coerced into handling his dirty work. Phobos and Chuck, desperate to pay him back, go elbow deep in blood, dirt, and gristle, cleaning up dog fights, delivering drugs, and disposing of dead bodies. Regardless of the haul, they shovel it, bag it up, stuff it in the trunk of their 1982 Cadillac Deville and drive it off for disposal. The misfit pair fumble their way through dangerous circumstances and criminal adventures. Desperation eventually drives them out of the city, across lost highways, encountering a circus of outlaws and revolutionaries living on the margins of morality.

Get yours
Posted by Steve Weddle at 7:39 AM No comments:

Its Tuesday night, but I'm still coming down from my Bouchercon high.

This was my first time at Bouchercon, the annual convention for mystery / crime writers and fans, and I'm both exhausted and also basking in how great it was. I saw my friends. I saw amazingly deserving people win awards. I saw equally deserving people lose awards with a grace and happiness that I did not expect. I saw one of the greatest writers of our generation in conversation with another of the greatest writers of our generation. I saw a beautiful city and I drank too much and I was on panels and I hugged old friends and made new ones. I had deeply personal conversations and threw up silly jokes. I had people I consider heroes treat me as an equal. I left rejuvenated and ready to write.

It's a cliche to say that the writing life is a solitary one, but cliches are there for a reason, and this one is true. But standing in a packed bar with so many writers of my favorite genre, I didn't feel alone. I felt part of something larger. A tradition, maybe. Or a community. 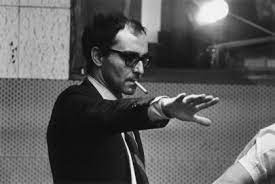 A few random thoughts on Jean-Luc Godard:
How much I love every single frame of Contempt.
The car crash scene in Weekend.
The dance scene in Band of Outsiders.
Godard in the long black-and-white interview, released in 1967, with Fritz Lang.
The way the beautiful Nouvelle Vague, with Alain Delon, has a boat scene that engages with Delon's boat scene in Purple Noon in a weird and unsettling way.
Lemmy Caution cruising around Alphaville, the ultimate world-weary PI in his trenchcoat and hat -- film noir and sci-fi merged in the film perfectly, with a tiny budget and no special effects.
Eddie Constantine back as Lemmy Caution 26 years later, yet looking the same (because he always looked old) in Germany Year 90 Nine Zero.
Pierrot Le Fou, based on a Lionel White novel.  Is the heist novel source recognizable at all?  Not really, but with Godard somehow that doesn't really matter.
Godard's unending love of pulp, crime fiction, detective stories, noir -- all put to his own purposes of course.
The man's crankiness and irascibility, which could make him no less funny than when he wasn't being cranky or irascible.
The way Isabelle Huppert, in Every Man for Himself and Passion, is a perfect Godardian actor, with her unreachability, her inscrutability, the total absence of anything like sentimentality.
How you can find an artist's work annoying and even maddening (sometimes) and still feel that you want to consume as much of it as you can.
And any film lover could go on and on about this...
For Ever Godard!
Posted by scott adlerberg at 8:05 AM 1 comment:

The end of The Walking Dead is near, and I have questions. 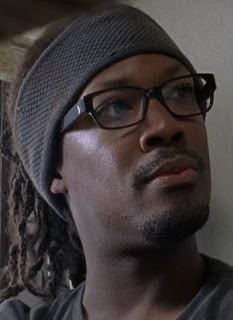 Heath, played by Corey Hawkins, was last seen on season seven, episode six of the series. He and Tara are on a supply run when he is taken by the Scavengers. As far as we know, he is still alive. It has been confirmed that Heath was taken by Jadis and her Scavengers and traded to the CRM, or the Civic Republic Military. The Scavengers had been trading people for supplies with the CRM to keep their community safe and fed. Jadis, the leader of The Scavengers also traded our hero, Rick Grimes. Did the two meet a similar fate? Was Heath considered an A or a B? Either way, I need to know what happened to him. 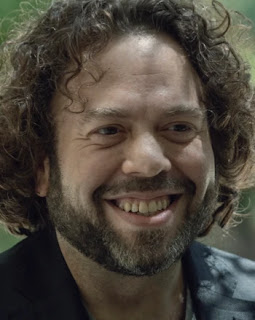 Luke, played by Dan Fogler, appeared on the scene in Season 9 with friends Yumiko, Magna, Connie and Kelly. He became an integral and comforting member of the team. They even gave him a bit of romance. Luke was essential in episode 16, “A Certain Doom,” formulating an attack plan to help destroy the army of walkers Alpha had accumulated in Season 10. In the end, he joins up with survivors to congratulate each other on the win, hugging Jules and heading towards Oceanside. He wasn’t seen at all in Season 11. However, in the final shot of Oceanside we see the community held hostage by bad guy Hornsby, their fate given to the flip of a coin.

Speaking of Oceanside, where is Sydney? 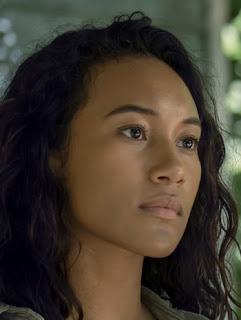 We are introduced to the community of Oceanside in Season 7. The former vacation and camping spot in Virginia has become a small fishing enclave, inhabited mainly by women. They came out on the wrong side of a disagreement with Negan’s former group, The Saviors. In response, every male inhabitant over the age of 10 was slaughtered. This group was fragile, looking for leadership and a way forward. Sydney was seen as a strong and capable leader, particularly after she mutinied against her grandmother and brought the community into the fold with Alexandria, Hill Top, and The Kingdom. We last saw Sydney in episode eight, season 10.

Who the hell was Georgie? 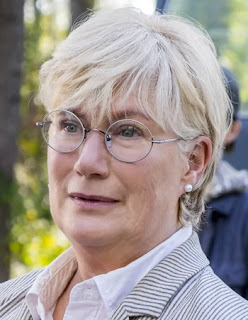 Georgie first shows up in Season 8, with an entourage and
everything. Eventually she assists the starving Hilltop with food and a book filled with detailed plans on starting and sustaining a community, including designs for windmills and aqueducts, all in exchange for a crate of records. Through letters, we see that she kept in contact with Maggie throughout Season 9 and eventually recruited Maggie to help sustain a community and recruit new people. Eventually, Georgie travels west to find more places to trade with, while Maggie’s village collapses. Maggie has no idea what happened to Georgie.
Posted by Marietta Miles at 12:56 PM No comments:

This week, the mystery convention Bouchercon was held in Minneapolis. It’s a great opportunity to connect with readers and other writers. And to see Minneapolis. 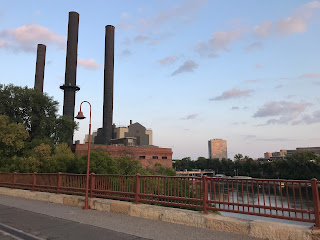 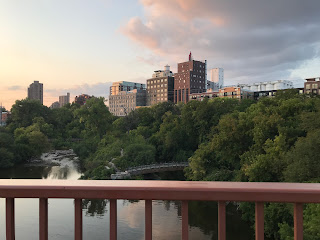 I’ve seen the Mississippi in St  Louis and New Orleans, so it was fun to see it farther north.

The main reason for being here was the convention. I participated in a panel and heard many others. 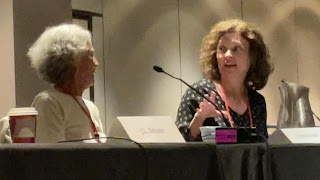 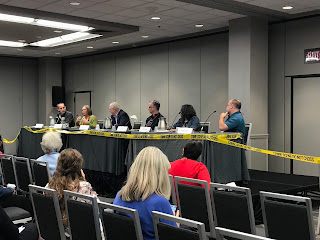 Then there was the socializing. It was great to strengthen existing friendships and make new ones. Writing is lonely work, and conferences like Bouchercon bring a much-needed dose of companionship. It came after two years of cancellations—2020 and 2021 both went virtual due to Covid. This year we were back in person, with people even more appreciative than usual for the chance to celebrate crime fiction. 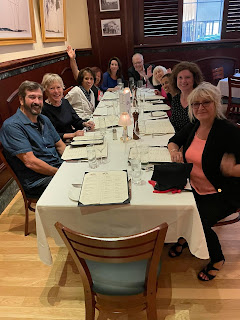 Posted by Claire Booth at 7:54 AM No comments: