I recently finished listening to the first season, 10 episodes, of the podcast called Penknife, described by its creators as "a podcast about writers who may or may not have written about crime but who definitely committed it".  Those creators are writers and booksellers Corey Eastwood and Santiago Lemoine, and the podcast is edited and narrated by Ramona Stout.  The podcast focuses on three people and the way, over time, they interconnected -- Jack Henry Abbott, Jerzy Kosinski, and Norman Mailer -- three men who during their lives wrote books of great value (and not always such great value) and whose list of crimes include, though is not limited to, murder, assault, and rape.

The season begins by detailing the Abbott affair and how Norman Mailer in particular was instrumental in getting Abbott released from prison, a place where Abbott, then 37, had spent most of his life.  Mailer had pushed for Abbott's release based on the literary value of what he'd read of Abbott's prison writing over months of correspondence with him. Kosinski, at least initially, helped Abbott as well.  Once paroled, and with the publication of his book In the Belly of the Beast, Abbott became the toast of New York City literary society, but this dream of redemption and a second life through art ended when, six weeks after his prison release, Abbott stabbed and killed a young waiter in the wee hours of the morning outside a Manhattan cafe.  After a manhunt that ended in New Orleans, Abbott was captured and sent back to prison, which he never left. 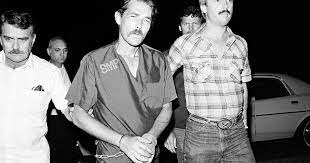 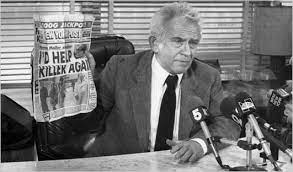 This all happened in 1981 and 1982, and I remember following the entire saga closely in the news.  And for me at least, part of the pleasure of listening to this podcast was hearing the perspective of the hosts on writers -- Kosinski and Mailer I'm talking about here -- who were, during the seventies and early eighties, two writers, among others, I sort of grew up with: reading them, thinking about them, seeing them a lot on television talk shows and even in the movies (Kosinski in Warren Beatty's Reds in 1981 and Mailer in Milos Forman's Ragtime in 1981).  Their perspective is, shall we say, highly critical, and I have to say that is with good reason; there is much, with both these guys, to be critical of.  It's hard to deny that both Mailer and Kosinski represent different strains of the last efflorescence of a certain type of white male writer who got to use the entire world as a playground for their own self-involved, and sometimes violent, experimentation.  All in the name of being...artists.  The way the world at large and the literary world specifically and readers' relationship to writers has changed since Kosinski and Mailer did their thing is reflected in the attitude of the hosts toward their subjects. 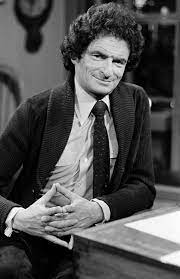 For the most part, Eastwood covers Kosinski's story, following him from his Polish childhood to fame and fortune and then semi-disgrace in the United States, and Lemoine covers Mailer's story. Their styles differ. Eastwood for a good part of the series, until he makes a key discovery about Kosinski's early life, views his subject with a degree of irony.  He finds Kosinski, as he himself says, to be something of a creep but an amusing and charming one.  Lemoine, on the other hand, and he makes no bones about this, detests Mailer, and he rarely spares us a chance to remind us of this fact.  And I'm definitely not going to defend Mailer about anything he did, least of all the stabbing, with a penknife, in 1960, of his second wife Adele.

That Mailer was half-cocked in many of his ideas and an utter asshole in life in myriad ways was well-known and much-discussed (as he loved, ever the publicity-seeking narcissist) during his life.  Mailer's obsession with violence and its so-called cathartic qualities, Mailer's self-branded left-conservatism, his views on race as explored, for example, in his essay "The White Negro", Mailer's weird preoccupation with and theories about how cancer can form, and, most famously, Mailer's views and treatment of women, his never-ending battles and resistance against feminism.  It's all in the podcast, and there's more.  This man is a treasure trove of assholery; he's like a walking embodiment of what's now called toxic masculinity.  However, I do think Lemoine's dislike of the man makes him overlook, or perhaps choose to ignore, how funny Mailer could actually be.  Sometimes, as I remember, it could be hard to tell whether Mailer's gibes about one thing or another, his trolling and publicity hogging, were entirely self-serious.  Like Kosinski, though without the charm, Mailer could be very funny on talk shows and in interviews.  I wouldn't say this is something essential that had to be included in the podcast, but if I had one criticism of the podcast, it's this: in ten episodes, a slightly more rounded portrait of the subject would have made the season just that much more interesting an experience since the listener would have had to grapple with Mailer the ass mixed with whatever in Mailer was at least somewhat likable. It's easy to mock Mailer's proposal for a stickball world series as part of his 1968 New York City mayoral run platform, but a more nuanced view of this same run, emphasizing that some parts of the platform were serious and some parts pure fantasy and absurdity on purpose, might have been more illuminating, somewhat in the way V.S. Naipaul wrote about Mailer's run for mayor and the question of the writer-politician in his piece in The Overcrowded Barracoon.

But anyway...I don't want to run on with my criticisms. Penknife, overall, is a podcast well worth listening to.  This goes for whether you are familiar with the subjects discussed or not.  There are many writers who have committed crimes, and the creators of this podcast started with two major ones (and Abbott) whose stories are, for all the revulsion involved, fascinating.  And then there's that question of whether one "can separate the art from the artist", a point of debate that never ends, and which the hosts, and Ramona Stout, hash out at length in the final episode.  How much do you want to know about a writer's life, his or her biography, when you read their works?  How does what you know about a writer's life affect your view of the work itself?  Do you even care about what kind of life the writer led if you connect with the writing?  And what if you think the writing is great and it means something to you, but later discover something terrible, or unsavory, about that writer's life?  Penknife gets into all these complicated questions and promises to continue doing so with more seasons to come.  Which writers will they focus on next?  I'm eager to find out.

Posted by scott adlerberg at 8:26 AM