A Pictorial History of Horror Movies

I don't know how many horror movie books I've read through the years, but I think the first one I ever read cover to cover was Dennis Gifford's A Pictorial History of Horror Movies. 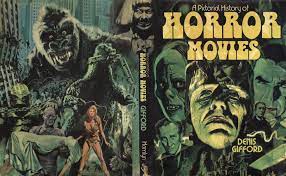 The book covers horror films from their beginnings during the Silent Film era to the early 1970s, and it's chock-full of great photographs.  I still remember where I bought it, at a Waldenbooks at the mall near where I lived (the Nanuet Mall), and I recall that I found it while simply browsing. I must have been eleven or twelve. I was a big fan of horror movies, especially the Universal ones, Lon Chaney silents, Vincent Price flicks, and, of course, anything Godzilla-related from Japan, and this book must have caught my eye on the shelf.  I don't recall whether I had allowance money to buy it or asked my mother to buy it for me, but however I purchased it, I brought it home and sank into it.  I remember reading a lot of it on my back porch during the daytime, so it's possible this was during the summer -- warm days, no school. 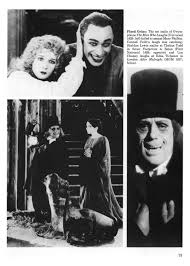 I came to use this book as a reference book for horror movies, learning a lot from it.  It contains not only descriptions of movie plots but also a lot about how the movies were made, who produced and directed them, who was in them, who did the make-up, like with Jack Pierce, the Universal makeup master, and how horror films evolved through time, turning to color and radioactive bred monsters in the fifties and on into the 60s and 70s. It has a good bit about early British horror movies, films from the 1930s, which I knew little to nothing about at the time. But absorbing above all else were all those horror movie stills, which, as a kid, I could lose myself in, imagining the stories around the one creepy or gory still of a movie I hadn't yet seen.  I could gaze at that still for long stretches.  And later, if it was indeed a still from a movie I hadn't yet watched, I'd compare whether the actual movie lived up to what I'd imagined it to be based on that photo.  This was the pre-video age obviously, so like anyone from before the advent of video cassettes and DVDs will attest, you had to make a mental list of films you wanted to see and then keep on the lookout for them on TV if you wanted to see them.  When you saw that the movie was going to be on, the expectation could be immense, an expectation that could be met, exceeded, or, sadly, disappointed.  But that expectation was fun in itself, and I give Dennis Gifford a lot of credit for evoking that excitement in me over this or that movie. 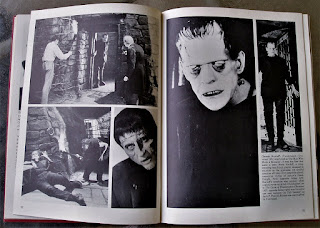 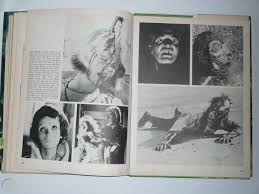 I still have A Pictorial History of Horror Movies on my shelves, though the dust jacket is pretty worn.  I haven't looked at the book, in all honesty, in years, but with Halloween coming, I thought of it again and its influence on me, the many hours of enjoyment I got reading and re-reading it, looking at the stills.  It's one of those books I'm glad has survived the decades and many moves from one place to another, that I think about with nothing but fondness, and, you know, now that I'm talking about it, I'll probably go over to my shelves as soon as I finish writing this and pick it up again. 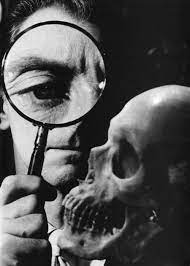 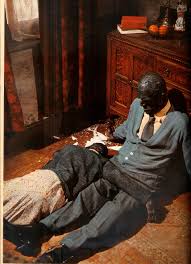 Posted by scott adlerberg at 7:42 AM

I've never forgotten that color still (from "The Sorcerers") of Catherine Lacey and Boris Karloff all burnt up amid broken bric-a-brac. It took up a full page in Denis Gifford's book. When I finally saw the movie, that scene was nowhere to be found. (Instead, there was a quickie closeup of Karloff in the burn makeup.) I've never seen that still in any publication before or since. I, too, still have my copy of Gifford's book.