I bumped into Cormac McCarthy the day after Christmas, 2018, in a restaurant in Santa Fe, New Mexico. Well, I didn't bump into him. But I stood within two feet of him, very unexpectedly.

I am an admitted McCarthy fanboy / attempted scholar. Towards the end of Undergrad, at the urging of my advisor (who had eyed me as a teaching student in our schools Graduate program), I'd written a paper that would, according to my advisor's plan, eventually turn into my Grad-School thesis, an examination on the myth of gnosticism in McCarthy's writing, particularly in Blood Meridian, as examined through the more humanistic understanding of The Stonemason's Ben Telfair.

It was a project I threw myself into, culminating in a trip to Texas State University's Whitcliff Collection, at which time I held in my hands handwritten drafts of McCarthy's beautiful but rarely performed play. I wrote pages and pages, while reading McCarthy's books over and over, until they all came to live in my head and heart. The Judge, of course, and the Kid, but Ben Telfair and Llewelyn Moss and Toadvine and Suttree and John Grady Cole and The Man and The Boy and Rinthy, too (maybe, oddly, Rinthy most of all).

So, the day after Christmas, 2018. I turn the corner and see the reclusive master sitting there.

I turned white, then turned the corner and ran.

We'd been hiking that day. Tent Rocks. And the hotel we were staying at had an excellent restaurant on the main floor. And there he was, eating dinner with a member of his family. 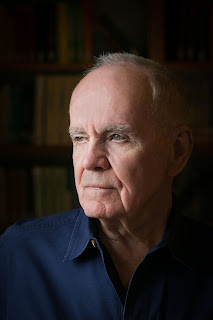 I know it sounds weird to say, coming from someone who wrote an entire paper on McCarthy, someone who spent a year focusing only on scholarly work related to the man, but until that moment, it hadn't occurred to me that I could be in the same building as him. Yes, I was in Santa Fe, and yes, I knew he lived there, but I hadn't gone to New Mexico to see him. My knowledge of where he lived was like... an interesting fact. Like how I know Harrison Ford lives in Wyoming. But you don't expect to see him.

But there he was.

And then I ran away.

My wife instantly knew something was wrong. She caught up to me and grabbed my shoulder. "What happened?"

"That. That is Cormac McCarthy. Sitting right there."

She peers over my shoulder. "Holy fuck, it is."

My dad appears next to her. "What happened?"

My mom comes over. We catch her up. "Seriously?"

"Well you can't let it go by without telling him what he's meant to you."

And then my mother walks to the elevator, her phone in front of her, and snaps a picture of the artwork on the wall. But the photo isn't really of the artwork. It's of Cormac McCarthy, eating Day-After-Christmas dinner in Santa Fe.

No, I'm not going to show you the picture. I've omitted a lot of details in this story, because, even though I've decided not to live a private life, I respect those who have. But I still have the photo.

I'm thinking of that story today because McCarthy's first new novel in 14 years, The Passenger came out today.

So often, with the truly mythic writers, we can think of them as Gods among us. As people whose genius touches us through their books, and, in doing so, the books themselves become almost icons of transubstantiation. Something holy.

And I wonder, if I hadn't bumped into McCarthy those few Christmases back, would I have opened my box containing The Passenger with a reverent awe? Would I have been almost scared to touch the book, probably the last full length novel of the Great American Writer?

When the box came today, I opened it with my pocketknife and took the book out and placed it on the kitchen counter. No matter what is inside (and I plan on taking my time with this novel), I am certain it will touch me. Move me. Make me consider humanity in all it's brilliance and craven cruelty. But I'll also know it was written by a man. Typed out by hands I have seen grip a fork and knife. That makes it more special, I think. The reminder that these great works are written human hands. It makes their genius relatable. It makes their flaws more understandable. It makes their accomplishments deeper.