The Lightning Rod by Brad Meltzer 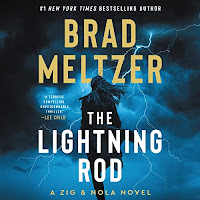 If it’s spring, then it’s time for another Brad Meltzer book.

For the past few years, a new Meltzer book—either fiction or non-fiction—is published. After a two-book non-fiction detour—The First Conspiracy (about George Washington) and The Lincoln Conspiracy—Meltzer returns to the heroes from The Escape Artist.

In the intervening years, Meltzer allowed both Jim “Zig” Zigarowski, a mortician who left his job at Dover Air Force Base, and Nola Brown, the US Army’s painter-in-residence, to age and move froward after the events from that previous book. Zig is now in a private mortuary, mostly happy to have left his old life behind. That is, until he receives word that “one of our own,” Archie Mint, has been murdered in his car, parked in his own driveway.

Now, we readers know what happened because Meltzer showed us in the opening scene. But there is more than meets the eye. In fact, by the time you reach the end of the book, you might be compelled to re-read chapter 1. I’m just saying.

Nola, meanwhile, has gone off the grid. She, too, is pulled into the case of the death of Mint, but for different reasons. Because everything is not like it appears (natch: it’s a thriller). Mint has been hiding things, things that his family discovered after his death.

To make matters even more interesting, Nola’s long lost brother is now looking for her. Graduates of the foster program, they were separated in their early teen years and now Roddy wants to reconnect. But for good, or for ill?

All of these elements—and an interesting sub-plot for Zig—are thrown together on a roller coaster and Meltzer sends the reader careening.

Now, as with all Meltzer books I’ve consumed, I listened to the audiobook by Narrator Supreme, Scott Brick. And, as always, I love his narration style, the way he can make the most basic of descriptions sound even more interesting than Meltzer’s actual words. He always puts just the right amount of sarcasm, shock, boredom, or whatever kind of emotion the character is feeling or saying. Scott Brick could read the phone book and I’d probably buy a copy and listen.

The construction of this book is Thriller 101. I don’t mean than in a bad way at all. Seltzer is an accomplished commercial writer and he knows how to craft and pace a modern thriller. Just because I could see all the architecture of the story detracted not at all from its enjoyment.

And that sub-plot Meltzer throws at Zig? I think it’s a great example of how the smallest, most human of feelings can rise up whenever and wreck havoc on a person’s life, even when that person is in the middle of an exciting investigation.

I could use some sort of hyperbolic imperative to compel you to read this book, but I don’t really have to. It’s a Brad Meltzer thriller, narrated by Scott Brick. It’s a win-win. That’s all you need to know.