Holy crap everybody. I have a book coming out in TWO WEEKS. You believe that? As in...the week that comes when next week ends. As in...once this seven-day block ends and rolls over into another one, and then into the one after that. I mean...that's pretty soon, right? Another thing I wrote will be out in the world in just a few days. And people seem to like it. 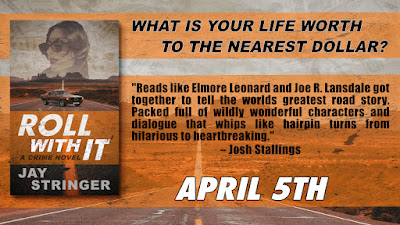 WHAT IS THIS THING ABOUT?

Imagine who Karen Sisco might have become if she'd quit the US Marshal Service after her run-in with Jack Foley. If she'd become a 'recovery agent' (let's say bounty hunter, it's more fun.) If she lived in Arizona and drove a cool car and then, one day, took on a case that reopened the past. Both 'the past' as in an unsolved case that haunts her, and 'the past' as in a girl she kissed in high school and has had a few 'what if' thoughts running around the back of her heart ever since.

BUT WHAT IS THIS THING ABOUT?

Ah yes. You got me. All of that is what happens, but not what the book is about. I'll be honest, I don't really like talking about that stuff. I think that's the secret sauce of a book. Something the writer should shut the hell up about, and let the reader find or not find the subtext as they choose fit. But I've said a few things publicly about this one that requires some follow-up.

I would suggest one of the things this book could be about is...when is it too late to change your lane? If you find yourself in your thirties or forties and feel a bit stale, is it too late to try something new? I started writing this one as a fun road story/heist novel mashup. And soon Chloe Medina started to tell me that maybe she was unhappy with this cool, laid-back, fun bounty hunter role and was actually knee-deep in an identity crisis. And she wanted to know if the person she'd become was the person she had to be.

And that was funny because...

My first novel was published in 2012. I've been either a full-time or part-time crime writer for a decade now. And there is a lot of water under that bridge. I've written the best damn book I could every time. But...I don't know. I think maybe I've written the book here that accidentally was about me. Not wanting to be angry or bitter, still wanting to have fun and be a positive influence, but realizing that maybe it's time to do that in a different lane. I started writing crime novels in my twenties, I'm now in my forties and I've changed a lot. I have two Marah Chase adventures to reissue in paperback this summer, and two more planned after that. I'm writing a horror/SF/speculative novel that's proving crazy difficult to finish. And then after that...we'll see. Life comes at you fast. Sometimes you need to roll with it. Sometimes you need to pause and take stock.

But don't worry. I'm also still a shameless plug artist, so I'll be talking more about the book next week. On April first. What could possibly go wrong? 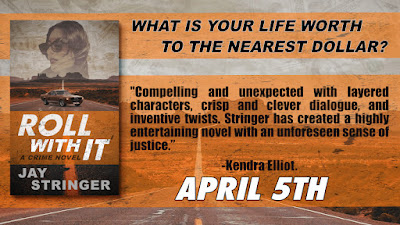