Secret Identity is Alex Segura’s seventh novel.  It follows his Pete Fernandez Miami Mystery series and Poe Dameron: Free Fall, a young adult Star Wars book.  He also has written several comic books and worked for years in comics.  I’ve read all five of the Miami private investigator books, and I’ve enjoyed watching Segura develop as a novelist, growing more and more assured in how he plots and paces a story.  In the Miami series, he took familiar detective fiction tropes and brought something fresh to them, as anyone working in this well-trod area should.  With Secret Identity, he goes a step further – or several steps actually – writing a mystery set in a world not often explored in fiction.  It’s the world he loves, that of comic books, an obsession, it is clear, since Segura’s childhood, and one gets the sense turning its pages that Secret Identity had a long gestation period.  Was the author working up to this over time, trying to think of a way to craft a mystery using his love of comics and his encyclopedic knowledge of the form?  Whatever the genesis, the result is a story with a voice and heart entirely Segura’s own. 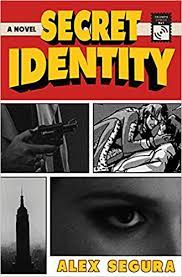 We’re in New York City, 1975.  Carmen Valdez, in her late twenties, has come from where she grew up in Miami and landed a job working for Triumph Comics.  She’s the Triumph boss’ secretary and all-purpose fixer.  As a company, Triumph is not nearly as large or influential as DC or Marvel, but for Carmen, “Working in comics was the dream”.  It’s a dream that has brought her to a place with “moldy studio apartments, skyrocketing murder rates, and smoky streets”, a city “fraught, menacing, and hopped up on paranoia – where muggings were commonplace and home break-ins a rite of passage”.

This is grimy seventies New York in all its famous anti-glory, and Segura evokes it well, if a tad conventionally, as it’s often depicted in the era’s crime films. Still, he doesn’t overlook the city’s attractions.  Despite its dangers, the place is vibrant and exhilarating.  To someone like Carmen, who is leaving behind a troubled childhood and a love affair that became toxic, New York represents a place to grow and explore and pursue her artistic ambitions.  Those ambitions are clear.  In an industry run by men, dominated by men at every level, Carmen wants to write comic books just like the male writers who pen the adventures of Spiderman, the Flash, or any of the various superheroes readers follow.  She has been an avid reader of comics since she was little, and Segura does a beautiful job describing how much they’ve meant to her:

She could feel her father’s leathery hand slide into hers, the hot, humid Miami summer enveloping her like a warm towel.  Could feel her sandaled feet scraping down Galloway Road as they made their way toward the newsstand – where her father would pick up the Miami Times and scan the comic book rack.  The titles always changed – the market was volatile then, even more than today.  But the barrage of colors and letters always had the same effect.  The titles screamed out to her – as if begging to be picked up…She wasn’t picky.  She’d ask her father to grab one for her, and he always would – no matter how they were doing, if he was working, or what struggles they might be facing.  Pepe knew his only daughter took great joy in flipping through the pages of a comic book, any comic book.

Though nobody else knows it, Carmen has begun work on creating her own character and stories.  Her hero is a woman, her powers not yet entirely defined.  As events transpire, a male co-worker gets an opportunity to pitch a new comic book series to the Triumph chief, but since her colleague is short of ideas, he comes to Carmen, whose knowledge of comics he apparently respects, to help him write it.  Can Carmen trust him?  What she does contribute, as she full well knows, she may not get credit for.  That’s the way of things in the business they’re in, the male-centered world they inhabit.  Her ambition wins out over her suspicion of his motives, and Carmen pulls together six complete comic book scripts she has been working on for some time.  Her colleague is astounded, and they brainstorm to flesh it out.  It seems as though Carmen will eventually be recognized as at least co-creator of a new character called The Legendary Lynx, but in a way all too plausible, her colleague gets the six scripts to their boss under his name only.  That Carmen was the main creative force behind the Legendary Lynx no one but her colleague and herself know.  Then her colleague is murdered, and a mystery blossoms, which Carmen needs to solve.  At stake: not only the truth behind the murder (which leads to other attacks), but also Carmen’s sense of herself as an artist, a woman, and just a plain human being.  Having a secret identity, being responsible from behind a mask or public face for something others admire, may be exciting and romantic in comic book characters like Batman or Superman, but when you’re a real live person who’s been denied credit for your work, it’s a different story. 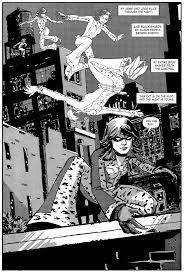 Secret Identity tackles a lot of things.  It’s a look at a particular place and era and an immersion into the state of the comic book industry of that era.  Without overdoing it, Segura gets into the taken-for-granted sexism of the time, the daily come-ons, indignities, and condescending verbal jabs Carmen has to deal with.  How she parries these affronts, some malicious, some not consciously meant as such but offensive nonetheless, is entertaining in itself, and the reader likes and roots for her throughout.  Besides this, Segura doesn’t make the mistake of giving Carmen a contemporary view of sexual relations in a 1975 world.  Carmen reads as a strong enlightened person of her time, and his decision to present a late scene in the book set in 2018, with Carmen talking to a younger woman who is the graphic novels reviewer for the New York Times, is both clever and emotionally apt.  We see how what Carmen did and what she endured, how she persisted, was entirely worth it.  The passage of time means that stories never told can now be told in the voice of the person who should have gotten credit in the first place.

I have always thought that Segura’s strengths lie more with character and emotional nuance than with action, and in this book, he embraces what he does best.  This is a character-driven mystery novel through and through.  Every single person here, down to the most minor characters, is well-drawn and understandable.  Motives are clear or become clear in time.  The narrative never dawdles but moves at an unhurried pace that shows the author’s confidence in his storytelling abilities.  And I loved the actual comic interludes, the black and white snippets we get from the first eleven Legendary Lynx issues.  They are exciting and sometimes humorous and connect in ways direct and oblique to the book’s plot and thematic concerns.  In a genre where so many books imitate other books, hitting overly familiar beats, Secret Identity goes its own way for the most part and takes you on a trip you likely haven’t taken before.  Like the best comics themselves, it is fun and full of passion and a thoroughly engaging ride.