"This book clicked in perfectly at 35,000 words, which is right in my happy zone of full oxygen saturation. It was the perfect length for a tale of heists, Nazi gold, murderous little people, dead clowns, and New York City at arguably one of its most interesting historical moments."

By Steve Weddle
If you've seen the cover of Nick Kolakowski's Payback Is Forever, then you've seen what I thought of it. I dug it.
Classic and fresh.
That's tough to pull off. I know. I've tried.
Nick and I worked together editing the award-losing anthology Lockdown during the first year of the pandemic, and I was privileged to see his skills at work, his eye for detail, for momentum, for all the little parts of a story the reader should never think about, should just enjoy.
Nick brings that same talent to his writing, and we're all the better for being able to watch him work, to read his new book.
Brian Asman said this new is one is like "a demented fun-house mirror version of a Richard Stark novel," which pretty much nails the vibe and the clear influence here.
I recently sat down with Nick (I assume he was sitting when he answered my emails, but who knows?) to ask him some questions about the book, about music, about movies.
Steve Weddle: Your new book, PAYBACK IS FOREVER, hits the ground running and doesn’t let up. How do you manage to create a character that readers care about as the story is racing down the road? Aren’t you supposed to stop and add in some backstory, have the main character take time to clothe some orphans at the soup kitchen?
Nick Kolakowski: Nah. With Payback Is Forever, I wanted to craft a throwback to the Richard Stark/Donald Westlake novels I devoured as a kid. The main character of Payback Is Forever is very much in the mold of Parker, the master thief who starred in 24 of Stark/Westlake’s books and yet has precious little backstory to explain why he’s an ice-cold badass. I let that homage dominate the character for most of my book’s length, and then I do my best to subvert it in the last few pages, because it’s become a cliché, and it’s a writer’s duty to seek and destroy clichés whenever encountered. Sorry, Donald.

SW: You’ve been writing stories for *checks watch* many years now. How would this novella be different if you’d written it a decade ago?

NK: I would have played the whole thing straight. It would have been a total homage/throwback to those pulp novels of the 1960s without an ounce of irony or invention. But plenty of folks have done just that in the past few decades, and many of them better than I could ever do. So in the last part of the book, I took a chance and tried to implode everything—the all-American myth of the criminal badass, the noir protagonist’s descent into inevitable doom, all that stuff that’s propped up the genre since its inception.

I have no idea if I succeeded, but I think the result is interesting. Hopefully in a good way. I mean, car wrecks are interesting, too, but you don’t want to be anywhere near them.

SW: This novella doesn’t have an ounce of fat on it. Were there subplots you trimmed away or was it always this sleek?

NK: It was always this sleek. I have trouble writing books longer than 40,000 words. Once I get above 50,000 words or so, it’s thin oxygen for me. Plots begin to warp and spin out of control. Characters stand around tapping their toes. But this book clicked in perfectly at 35,000 words, which is right in my happy zone of full oxygen saturation. It was the perfect length for a tale of heists, Nazi gold, murderous little people, dead clowns, and New York City at arguably one of its most interesting historical moments.

SW: Besides this interview, what's the biggest mistake you've made as a writer?

NK: Not starting earlier. I’ve been writing all my life—mostly short stories—but I didn’t put grinding effort into longer fiction until 2017. Some days, I feel like I’m rushing against the clock. I don’t know whose clock, but it’s ticking away, and there’s so much to do.

NK: Anything by Tom Waits or Leonard Cohen. That might seem counterintuitive, but I have such a nostalgic attachment to those two gentlemen that I can’t help but feel perky whenever I hear the first notes of “Downtown Train” or “Everybody Knows.”

SW: On the off chance that there's someone out there who hasn't read any of your work, would this be a good place to start?

NK: Love & Bullets would be the best place to start, simply because it's a collection of three novellas ('A Brutal Bunch of Heartbroken Saps,' 'Slaughterhouse Blues,' and 'Main Bad Guy') with a whole bunch of added material, and altogether it represents about four years of writing. It's got an epic sprawl, it's funny, and there are some cool kills.

SW: What's the most surprising book you've read in the last year or so?

NK: The Dawn of Everything by David Graeber and David Wengrow really blew my mind. It's a nonfiction exploration of "deep time," that period between the emergence of modern human cognition and recorded history. It discusses how people 100,000 years ago might have lived, and how they might have structured their societies, and how it all still impacts us today. Graeber and Wengrow are biased toward this vision of "beautiful anarchy," where everyone sort of operates in harmony without bureaucracy or leaders or laws, and I'm not sure I entirely believe it, but they make some good points. It was mostly surprising for its revelations about how much Native American philosophy and thought might have influenced Enlightenment thinkers and the various Revolutions of the 18th century, actually.
***
Thanks to Nick for the chat. If you're looking for a book to blow your mind, you can snag his new one here. 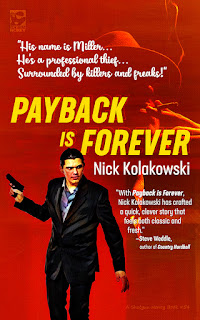