Creativity: How a Master Songwriter Does It

If my college years had a soundtrack, it was written by Jeff Tweedy. Originally with the alt-country band Uncle Tupelo, he went on to start Wilco right smack in the middle of my time in the great music town of Columbia, Missouri, where I saw him perform multiple times with both bands at The Blue Note, one of the best places on God's Green Earth—I’m not kidding here—to see a band.

I’ve seen him perform since, of course, but not often enough. So I was delighted when he showed up as a guest on a podcast I occasionally listen to, The Ezra Klein Show. Turns out that Ezra, when not analyzing politics, is a huge Wilco fan. And he wanted to talk about creativity and what Tweedy says about it in his book How to Write One Song: Loving the Things We Create and How They Love Us Back. 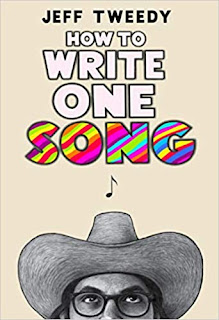 Tweedy’s specific experience is with songwriting, of course, but what he talked about on the podcast applies equally to fiction writing. For instance:

“Exercise the muscle that pushes the ego out of the way,” he says. That really struck home with me. I’ve often described the switch from non-fiction to fiction writing as learning how to use muscles I didn’t know I had. I had to force them into action in order to get my imagination working. He means it slightly differently and makes a point that’s even more important. Don’t be so full of yourself that you won’t try something you might fail at.

He’ll finish writing a song, even if he thinks he’s not going to like it. “I feel like that frees me up to go to the next song. And so you’ve identified one of the main things, I think, that keeps people from doing creative things, is this idea that it’s bad or that they’re not going to be good at it. And it’s going to hurt to not be good at something. Even today after writing thousands of songs, maybe — I don’t know, at least hundreds of songs — I know that I still have to go through being bad to get to something good.”

“I think people have this mistaken notion that (artists) they admire from the outside, they’ve somehow sidestepped that part of how it works. And I don’t think you ever really do.”

As always, Tweedy is worth listening to. The podcast episode aired July 2, 2021. You can find The Ezra Klein Show wherever you normally get your podcasts.