"So, Morgan, who is your pick?

"Kristen Gilbert had that whole boring thing going on that's kind of hot, but Myra Hindley had great style."

"She did. She really did. My vote is for Josephine 'The Clipper' Walker.  Great bone structure, into personal hygiene, highly intelligent."

"Cool.  So I'm going to go out on a limb, as they say, and put my money on Countess Bathory, even though it's really hard to tell what she looks like."

"Well, you've always been into mystery."

So goes the exchange between the two women doing a podcast that forms the opening scene of Women Who Kill, a 2016 film, directed by Ingrid Jungermann, that I caught up with recently while watching a slew of romantic comedies for the film talks series I do each week in Manhattan during the summers.  I say romantic comedy, because the film, yes, is that in part, but it's also what you might call a laid-back, though tense and suspenseful, thriller.  The two women doing the podcast, Morgan and Jean, have recently ended a relationship, but they still work together and share an apartment together in Brooklyn.

Josephine Walker, one of their contenders for hottest female serial killer ever, is nicknamed "The Clipper" because of the toenail clippings she would take as souvenirs from her victims.  When Morgan, at her food coop, meets a dark mysterious woman named Simone, she is enamored of her, and these two start a relationship.  But as the plot unfolds, it becomes clear that mysterious Simone may, in fact, be using a false name and that she might be the daughter of Josephine Walker. At least Jean thinks so, though Morgan at first is convinced that Jean is warning her off Simone for reasons having to do with jealousy. 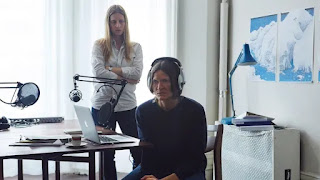 I don't want to give away too much more of the plot of Women Who Kill because it's a clever and funny one.  Ingrid Jungermann wrote and directed it, besides starring in it, and she has a deadpan way about her that is very funny.  The movie also happens to be, as Jungermann has talked about, a kind of queer riff on Woody Allen's Manhattan Murder Mystery, a film in which a married couple at a dead end, played by Allen and Diane Keaton, become convinced that their neighbor has murdered his wife and start their own amateur investigation.  As it turns out, the excitement of snooping around and the danger encountered only serves to improve their own relationship.  Jungermann has her own style completely, though, I should emphasize, and is quite trenchant throughout in her observations on love, relationships, self-destructiveness, happiness and unhappiness, and any number of other things. I should add that film has an unexpected and somewhat odd ending, but it's the right one, unsettling and on the cold side.  You watch the closing credits chuckling but feeling a chill, which suits perfectly a film that is a comedy and a romance but doesn't shy away from the dark.

Ninety-one minutes and it's easy to find for streaming.  You can't go wrong.

Posted by scott adlerberg at 9:08 AM