That Last Minute of a BBC Series Premiere: Unforgotten 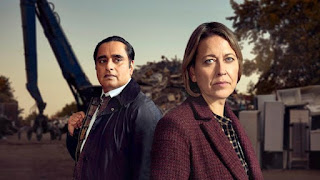 BBC shows are a unique thing, and I always find them fantastic.

No matter how tranquil or gritty they might be, there has to be some secret story bible because many of them start the same way. We are shown the detectives, usually in a station or finishing up the last case, chit-chatting with fellow officers. We get to see the victim but we don’t yet know what to feel about him or her other than an untimely death. Then there are all the characters that we’re going to meet and be part of the case.

Yes, I know this is elementary storytelling, but with BBC shows—especially the wonderful Unforgotten—you don’t have anything else to go on. You just see these random characters and not only do you not know who they are, but you also don’t know why they’re important.

Unforgotten, which began its fourth season here in America this past Sunday on PBS, is a cold case show. Interesting timing considering my wife and I just started watching the old CBS show Cold Case just a few weeks ago. What I appreciate most about Unforgotten is the "normalness" of the characters. No typical detectives here (i.e., raging alcoholics with ghosts of the past), just normal people—anchored by Nicola Walker’s DCI Cassie Stuart and Sanjeev Bhaska as DI Sunny Khan, complete with backpack—doing a dirty job, looking into cold cases. Season two was particularly great.

But it has a wonderful way of hooking you, and it all leads up to that final minute of the series premiere. Other than the cops doing their job, uncovering a thirty-year-old crime, there are the other main characters, including Andy Nyman. Now, I know you’re not supposed to laugh at a show like Unforgotten, but my wife and I both started cracking up when Nyman showed up on screen. We know him best from the up roaringly hilarious film, Death at a Funeral, the 2007 film directed by Frank Oz (trailer here). Nyman played a hypochondriac who had some unfortunate fecal issues. I know Mr. Nyman would like a couple of Yankees know he’s more than that character in that movie, but Death at a Funeral is one of the funniest films I’ve ever seen. I’m guessing Nyman’s role in Unforgotten will help us add a layer on his acting credentials.

Anyway, back to that last minute. We’ve seen five random folks, each with their own lives and individual problems. Then, as the camera shows us those five people going about their lives, the detectives are briefed on the case. A crucial piece of evidence has been discovered and you realize…well, it’s a spoiler, right?

Yeah, it is. The show’s only had one episode aired so you can easily catch episode two tomorrow. The premiere is available via your local PBS station and Amazon Prime.

But suffice it to say the BBC shows have a unique way of hooking the audience’s attention and glueing us to our screens. And I’ve always loved how they do it and I can’t wait to find out more.