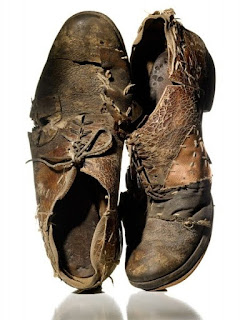 We never really know the inside of someone's head.

I was at a writer's convention, years ago now. I was in a much worse place mentally, and I hadn't yet figured out how to talk about it. Added to this, my career was in a weird place. I was out of contracted and being ghosted by my previous editor -after they had asked me to get to work on the very book they were ghosting me over. I'd been writing full-time for around a year, and had been struggling hard with the change from being surrounded by co-workers to being surrounded by myself. And with the added problem that the money wasn't working out. I needed a contract and...well, ghosted. I was facing up to the idea I would need to get a job again.

My head and emotions hadn't been right since my previous day-job had caused me to have a mini stress-related breakdown a couple years before. I walked into that conference primed for some kind of disaster or other. I simply wasn't well. A few people knew me well enough to notice.

I had also organised an event. You know the ones. They have a cool name. People read stories in front of an audience somewhere that sells alcohol. I'd organised the event -in a city I'd never been to, at a bar I'd never been to- from thousands of miles away with help from some writer friends. And I'd made the decision to prioritise platforming as many and varied voices as I could manage at a non-paying event before half of the writers were in town. I took myself off the bill to make space.

But there was another problem brewing. You see, a large part of all of our frustrations in publishing is expectations. We don't really know how the industry works from the outside, and even when we get in, our information is only as good as the people we talk to. I mentioned my career was in a bad place? Well, in many ways, my career was in exactly the same place as the vast majority of lower or mid list authors. Except we never know that going in. So we get anxious and depressed. Unless you're a person already prone to those things, in which case you get more anxious and depressed.

In every 'real' job I've ever had, there's the induction period, or some form of official training or meeting, and then you're off onto the floor and things are taken over by the real staff who show you the ropes. You'll be told who to avoid. You'll be told how the systems really work. You'll be told which bits of equipment do what they should, and which you should never use. You get the real scoop.

By and large in publishing that doesn't happen. If you have an agent, your scoop is as informed as they are. If you're indie, you have whatever preconceived ideas you came in with. And all of us are only ever getting half the story, and certainly never know all of the money. Publishing, by and large, is a collection of cargo cults built up into a pyramid scheme, but nobody tells you that. And a lot of the truly successful writers are people who manage to switch-off all the drama and politics that comes with that, and focus on telling good stories and connecting with readers.

If you stand in a circle with ten other writers at a festival or convention, five of the people there will think they're failures for not having what they think you have. And four of the people there are too busy wrapped up in whatever career uncertainties they're having in that moment to even think about what they think you've got. Add into that, a lot of people are genuinely concerned with helping others and making more space at the table, but also live with their own crippling career worries every second.

So not only did I walk into the convention -and that evening event- carrying around all my own bullshit, I was also a walking target for a few other people's bullshit, too. Not just my own expectations and fears of falling short off what I thought I should have, but also some people -who all things being clear were basically in the same place as me- judging me based on what they thought I had.

And hey, I'd just had five books published in five years. I had two panels at the convention. I seemed connected, because I'd just organised an event and because I'm lucky enough to be friends with some very cool writers. So I get why Person A looked at me and wanted what I had, and I get why Person A felt that, by not giving them a space at the event, I was gatekeeping and not sending the elevator back down from wherever he imagined I had ascended to. But he assumed all those things and took it out on me in a verbal outburst.

He had now way of knowing then -or now- that I was already on the edge of tipping into a bad place, but he walked right up and added to my problems anyway. Two other people added to my problems over the next day. They're not stories worth telling, and I hold no grudges. We're all carrying what we're carrying. But that weekend what I was carrying became too much. At a publisher-sponsored event a little later on I had the clear realisation that maybe I didn't need to exist.

And I reached for the same emergency self-preservation tactic I'd used before. I drank. And I still don't remember the rest of that evening, but I do remember being conscious again walking down a nearby street at 2AM, now sober with the feeling of having been very drunk. And finding a few other writers who were still awake, and having a fun conversation, and everything feeling a little better again.

I'm not here today to talk about me. I'm fine. Things would get bad again from there, and then eventually they got better. I learned how to handle my load, and I learned to share the load with people who love me. So I'm absolutely fine. But I'm writing this because I'm qualified to talk about my own mental health, and not to talk abut other people's.

We're all carrying different loads. We're all coming from different places. Some of us have way more privileges than others, and are allowed to fuck up more times. But also sometimes people make assumptions about who we are, or where we are in a career, based on the way they think things work.

Years before all of this, I met a member of one of my all-time favourite bands. He'd played a part in some of my favourite albums, featured in some of my favourite gigs. To me, he had a large slice of whatever it was I wanted in life. But when touring a solo album he stayed at my father-in-law's place, in the spare room, eating food my FiL cooked. Because that's what life is really like for 98% of touring musicians. I was lucky enough to realise early on that this was the music life, and decide not to keep chasing that dream. I knew that one would kill me. Most of the actors you see on TV are not living the lifestyles that the TV makes you believe. Almost every writer in the word has to have at least one side hustle. At least. Right now I have three side hustles.

Now, there is privilege that comes with it. When my first book was published, my nan took a copy to her brother, and he burst into tears when he held it. The idea that someone from his family could do that. During that first year of publication, the last thing I wanted to do at the day job was talk about writing, and I dismissed every opportunity to do so. Until a friend took me aside and pointed out the simple truth that people were interested and I was the only writer they'd met. And in refusing to talk about it I was being an asshole. In moments like that, you realise that you're doing a thing other people dream of. You are living someone's dream even if it's not your own. When you find yourself standing in that group of ten (or however many) at a writers festival, you should try and keep your place in mind, and not be shitty to anyone or crap on anyone's expectations or impressions.

It's on us, all of us, to not dump on someone because of our own misconceptions or expectations. But it's also on everyone else not to dump on ours. It's a we're-all-trying-to-manage thing. You never know when you might be the person to add that last bit of burden, based on what you think someone else has.

Writer twitter has been fighty and savage lately. And there are many good fights to pick. But can we all....take a minute? Breathe a little easier? Look out for each other? The last year has been brutal. The three or four years before that were savage. For many people the whole lifetime before that has been triggering. And who knows what's coming next. Let's just.....breathe.