Beau GoGoes there with The Go-Go's

This week, Beau takes a look at Murder-A-Go-Go's, edited by Holly West.

The Go-Go’s made music on their own terms and gave voice to a generation caught between the bra-burning irreverence of the seventies and the me-first decadence of the eighties. Anthems like “We Got the Beat,” “Our Lips Are Sealed,” and “Vacation” are an indelible part of our collective soundtrack, but more than that, they speak to the power and possibility of youth. Inspired by punk but not yoked to it, the Go-Go’s broke important musical ground by combining cheeky lyrics, clever hooks, and catchy melodies, perfectly capturing what it feels like to be young and female in the process.

But beyond the Go-Go’s effervescent sound and cheerful pop stylings, a darkness underlies many of their lyrics and melodies, hinting at the heartache and frustration inherent in growing up. In other words, plenty to inspire murder and mayhem.

With a foreword by Go-Go’s co-founder Jane Wiedlin and original stories by 25 kick-ass authors, editor Holly West has put together an all-star crime fiction anthology inspired by one of the most iconic bands of the eighties and beyond.

“I always suspected that twinkle in the Go-Gos’ eyes was a coded invitation to a darker world. In the hands of these 25 stellar crime fiction writers, ‘We Got the Beat’ and ‘Our Lips Are Sealed’ become evil little gems. A totally rad read.” —Alan Hunter, Original MTV VJ, SiriusXM Host

“Shock and awe, that sums up my reaction to Murder-A-Go-Go’s. Shock to live in times when ‘The Whole World Lost Its Head’ and awe at the response of these gifted writers. Buckle up for a ride that will leave ‘Skidmarks on Your Heart.’” —Sara Paretsky, bestselling author of the V.I. Warshawski crime series

“Who knew those happy songs by one of all-time favorite bands, the Go-Go’s could inspire such dark, noir, spine tingling stories?!! It’s a collection of tales of distinctly female rage—the murderous kind and other wise—to keep you up at night!” —Alison Arngrim, TV’s Nellie Oleson and New York Times bestselling author of Confessions of a Prairie Bitch 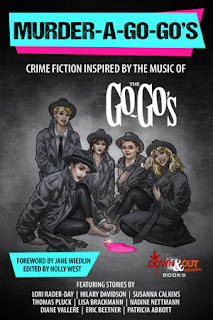 Thanks for the shout out!