The continuation of Lupin, the French-language heist thriller (June 11 on Netflix; it’s officially Part 2 of Season 1. Whatever. Just watch it. My review of Part 1 is here.) 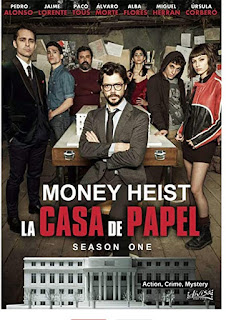 Finishing Money Heist, the Spanish thriller I just started binging. I’m late to the party and still only on Season 1 (there are four). So far it’s perfect high-stakes, slick-criminals summer viewing.

The Underground Railroad, limited series (out now on Amazon Prime). Colson Whitehead’s book, on which the series is based, was phenomenal. And Barry Jenkins directs.

In the Heights, in theaters June 11. Lin-Manuel Miranda. Enough said.

Black Widow, in theaters and Disney + Premium July 9. This one has an asterisk. Black Widow is one of my least favorite characters in the Marvel Universe and this could be junk. I’ll see what the reviews say before I commit . . .

Jungle Cruise, in theaters July 30. Dwayne Johnson. Emily Blunt. Could be junk. Almost guaranteed to be ridiculous. Will I still see it? Yes. Guaranteed.

The Other Black Girl, the debut novel by Zakiya Dalila Harris (June 1)

Finally digging into Death in Mud Lick: A Coal Country Fight Against the Drug Companies that Delivered the Opioid Epidemic, by Eric Eyre. (out now) It won the Edgar for Best True Crime this year and has been in my to-be-read stack for a while.

The Eviction of Hope, a crime anthology. (out now)

And wrapping up the summer, as always, with Louise Penny. The Madness of Crowds (Aug. 24)

And a few non-media things:

Sending my children to camp

Eating at a restaurant (inside even!)

Bouchercon. I get to list this because, while normally it’s held in the fall, this year takes place August 25-29. In New Orleans. So … hot and sticky and hurricane season. But also … people and friends and panels and jazz and travel and socializing. Heaven.