Hairdresser Sleuth Trims Down Suspect List in Death at the Salon by Louise R. Innes 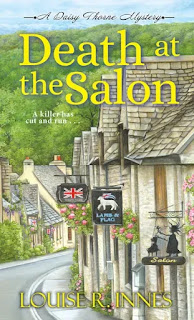 Daisy Thorne owns the Ooh-La-La hair salon in the small English town of Edgemead. As is her routine, she takes care of her last customer, cleans up the place, and, on that evening, amid a torrential rainstorm, leaves out the back door. It is there when she discovers Mel Haverstock, lying on the ground, Daisy's own cutting shears jutting into the victim's back.

Well, that's not good. But, she does the dutiful thing and reports the crime to the local police. DCI Paul McGuinness arrives and surveys the evidence. By-the-book guy that he is and despite their prior relationship in solving another crime, McGuinness does the only thing the evidence suggests: brings Daisy in for questioning. She's got motive: Mel and Daisy were not the best of friends back in high school. She's got the weapon: those were Daisy's scissors in Mel's back after all. She's got no alibi: she was alone in the salon. And Daisy's DNA is on the victim's clothes. What's a cop to do?

Well, what's an amateur detective to do but clear her name while staying often one step ahead of McGuinness's own investigation.

As I've mentioned before, I'm reading lots of cozy mysteries in 2021, a genre I've barely read in the past. I call it Cozy College and the primary reading list is the Cozy Corner subscription service through Houston's Murder by the Book. This book list is curated by the bookstore's own John McDougall and Death at a Salon is the April selection. To date, John has selected first-in-series books, but Death at a Salon by Louise R. Innes is the second. The first book's events were referenced through this current book, but you really don't need to have read Death at a Country Mansion to enjoy Death at the Salon.

And boy did I enjoy this novel. Up until now, my favorite of the Cozy Corner books was February's Murder at the Beacon Bakeshop, but Death at the Salon might take the top spot. I'm a fan of the various BBC mystery shows that make their way across the pond so that probably plays a factor. This book has all the Englishisms I've seen in those shows, like tea drinking, small-town settings, and a nice and varied cast of characters. But if you don't like the lead character, any book or TV show falls apart. Happy to say that Daisy is delightful and instantly likable.

She keeps her cool under pressure, but still comes across as real. She fears for herself were she not to clear her name and hurts when other things happen to folks she knows. Author Louise Innes plays out the subtle romantic thread between Daisy and Paul very well, especially as the events put a strain on their delicate relationship. For his part, Paul is nicely characterized not simply as a gruff policeman nor as the hunk Daisy pines for, but as one who likes Daisy yet still has a job to do. Those two positions clash within him as the story goes on, and it's fascinating to see how it plays out.

Interestingly for an amateur sleuth, Daisy is actually pursuing an criminology diploma at a local college. I'm guessing it's because of her solving the first case, but I'm not sure. Thus, throughout the story, she'll drop some nugget she learned from her studies and apply it to the current case, even when that something is used against her, like when she's arrested for the crime. I found that to be actually realistic.

What I especially loved was the ending. Taking a page from Agatha Christie herself and with the flair of Nick Charles from the Thin Man movies, Daisy and Paul bring all the suspects into the same space. I'll give you zero guesses as to the location. There, the true culprit is revealed. Innes does a great job at keeping the villain hidden from the reader, compelling you to keep turning pages. She is the author of twenty-five novels so she knows how to pace a story. It is effortless here and carried me to the last page.

Which is where I jumped off and found her website. She writes different styles of books under variations of her name. What's great about the site for the Daisy Thorne series is you can get a free ebook prequel by signing up to her newsletter. Done. You can also purchase the first book in the series, Death at a Country Manor. Done. And, later this year, the third book in the series, Death at Holly Hall will be published. I'll eagerly be waiting.

In the accompanying postcard he includes with the paperback, John mentioned he wanted to feature a story not set in America. I reached out to John this week and asked him why he selected Death at the Salon. "Part of the reason was the release date. Because cozy readers tend to stay up on new releases I'm trying to pick current titles that they hopefully haven't picked up yet. But I also really loved the first in the series. There are some great British cozies that revolve around bookstores and libraries, but a salon is a perfect setting for a cozy, and I'm surprised we don't see more of them. They're ideal community hubs for gossip and sleuthing. I'd been looking for the right non-US set book to feature, and Innes's combination of setting and characters is really wonderful."