What Are Some Literary “Jumping the Shark” Moments?

For the longest time, our front living room was television-less. That’s where the library is, it’s where we set up our Christmas tree, and it serves as the guest bedroom. We didn’t mind not having a TV in the front room, but during last year’s NFL season, I pulled out an old TV we had and one of those digital antennas and converter box and set up the TV. I’m the only one in the house who enjoys football and I didn’t want to hog up one of the good TVs just to watch a game.

It’s been kind of fun having that old TV available. I plugged one of our VCRs (yes, really) and a portable DVD player so I could watch the occasional show on it. In terms of live television, however, when it’s not being used for football, it’s on MeTV.

Imagine my surprise, a couple of weeks ago, when suddenly MeTV was not where it usually was. The network recently purchased a station here in Houston and started broadcasting from that new channel. A channel my old converter box/antenna combo did not receive. Cue a drive to Target to purchase a new combo setup. Viola! They work perfectly and I now can get MeTV. 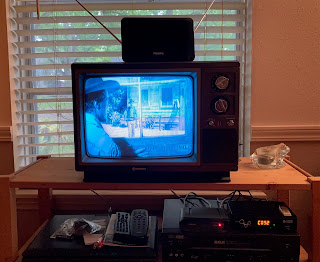 But this new converter box also has a recording feature. It’s like a DVR but only for over-the-air channels. No problem for me. So one afternoon I pulled out the instruction manual to figure out how to record things.

And I received a happy surprise.

“Happy Days” was airing at that time and wouldn’t you know it, the episode in question was “Hollywood, Part 3.” What? You don’t know that episode by title? Well, it’s the exact fifth episode where Fonzie jumps the shark.

Naturally, I ended up watching the rest of the episode.* Yeah, it’s as cheesy as you remember it to be, but I reckon my nine-year-old self was glued to the TV in suspense, just like the Cunninghams were. 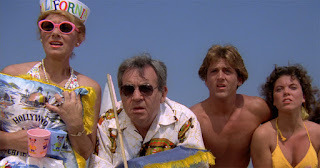 The term “jumping the shark” has been used to define when a TV show went off the rails. That is, when it stopped being the original thing it was and became something else, usually a shell of its former self. Just me writing this brings to mind many a show to your minds. That time when Bruce Willis and Cybil Shepherd got together in “Moonlighting.” That time when Victoria Principal discovered Patrick Duffy’s Bobby Ewing in the shower and they told you the entire season you had just watched…was a dream. That time when David Duchovny left “The X-Files.” Those are just off the top of my head.

Then I got to thinking: Are there literary “jumping the shark” moments? Are there books in long-running series that jump the shark? I know there must be, but I’m not coming up with any. Granted, I’ve not read many long-running series. There are 52 In Death books by J.D. Robb (Nora Roberts). John Sandford has written 31 in the Prey series. Twenty-five Jack Reacher books exist and I don’t even want to start counting the number of series James Patterson has written. Erle Stanley Gardner wrote 80 Perry Mason novels (and 30 Cool and Lam novels). The old pulp writers Lester Dent (Doc Savage) and Walter Gibson (The Shadow) wrote a novel a month for years.

The point is, there are many a long-running series in the book world. Have (or did) any of them jump the shark?

By the way, Happy Days went on for another six years, eleven seasons in total. Were all those post-shark episodes bad? Probably not. The TV show Dallas recovered from the Bobby-in-the-Shower moment, but The X-Files and Moonlight didn’t.

So if there is a book series that jumped the shark, did that series recover?

*Side note: The other plot for this episode (and probably parts 1 and 2) was Richie mulling over a choice of whether or not to attend college or head out to Hollywood and sign a film contract. I had completely forgotten this since I probably saw the episode on the date of its airing and then never again since. But there’s a nice scene between Richie and his dad. Howard Cunningham gives his son a nice pep talk, ending with a reminder: no matter what Richie choose, his father will support him and be proud of him. Now that I’m a dad myself, this scene got to me in a way my nine-year-old self couldn’t possibly have imagined.

Email ThisBlogThis!Share to TwitterShare to FacebookShare to Pinterest
Labels: jumping the shark, TV