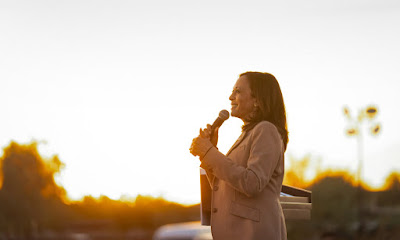 “While I may be the first woman in this office, I won’t be the last, because every little girl watching tonight sees that this is a country of possibilities, and to the children of our country, regardless of your gender, our country has sent you a clear message: Dream with ambition, lead with conviction and see yourselves in a way that others may not, simply because they've never seen it before."

On January 20th, while my mother and I watched through bittersweet tears, President Joe Biden was sworn in as the 46th president of the United States. It was not a perfect moment. How could we shed joyful when so many people were dying? While we celebrated people were crying, desperate and missing their loved ones. While others were conniving and thieving. Destroying. Lying.

Still, Kamala Harris now stands beside the president as the first woman, Black American and South Asian American to serve as Vice President. For the first time in history, we have a female leader in the second highest position in the country. There is much to celebrate.

The inauguration of Vice President Harris is a significant step along a new and vital path. I believe, if we continue to place women in positions of leadership, all people will begin to recognize it as a normal and natural deed. Day in, day out; witnessing women in positions of governance will, over time, support the true view that women are equals. Women are capable. Women are deserving.

This new era sits in great juxtaposition to various times in our past, both recent and longstanding. Disheartening examples of casual sexism could be found in the highest office of our country. It was displayed and unchecked during the 2016 election.

“Look at that face. Would anyone vote for that? Can you imagine that, the face of our next president?!” Former President Trump said of GOP presidential hopeful and CEO of Hewlett-Packard Carly Fiorina in 2016.

Yet, he was given the office. Even while sitting at the head of our country, he continued to mock issues women brought to his attention and he answered claims of his own sexual misconduct by insulting and bullying the women. A bad example, now out of time.

I believe, if we follow this new path, we will, albeit slowly, move away from the years of sexism and subjugation women have endured at home and in the workplace. If we keep this up, women will be considered for the jobs they want and the jobs they are qualified for. A woman might even bring home the same amount in her paycheck as a man. She’ll be able to take care of her own house and her own people. Without a second or third job. Women will work and live free from harassment and discrimination. Women will be equal partners in this nation.

With each new generation women will earn offices of power and with each new generation it will become more accepted for a man to look to a woman as a peer. This collective mental adjustment will not only serve women it will save them, if only in part. Challenge and change the view of women as lesser to men and you interrupt a small segment in the cycle of domestic abuse. Women are worth more.

Even now, in this historical moment, it is hard to forget and ignore the ugly voices; jawing on the television, repeating in movies, and at times, in our own heads. Women can’t do this. Women can’t do that. Women aren’t strong enough. Smart enough. Pretty enough. We’re never enough. And this election taught us, at the very least, one disturbing fact; if you repeat a lie enough times, to some it becomes truth. The idea that a woman isn’t capable or deserving of holding power is a lie we’ve lived with for far too long. 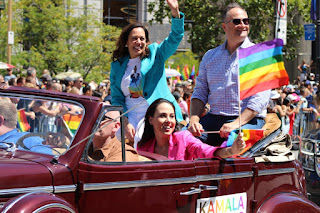 Posted by Marietta Miles at 8:47 AM