A while back, I posted here about the Romanian film Police, Adjective, a cop story that climaxed not with a shoot out or any other action scene, but with three cops in an office debating the meaning of words in a dictionary.  This excellent film came out in 2009, and since then, the director, Corneliu Porumboiu, has made a number of films, including his most recent, from 2019, a sort of follow-up to Police, Adjective, called The Whistlers. 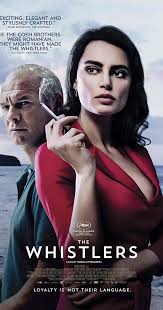 To the strains of Iggy Pop's "The Passenger", a police officer arrives on Gomera, one of the Spanish-run Canary Islands off the coast of Africa, and he quickly makes contact with an attractive woman named Gilda, who tells him that what she did the last time they met, in Bucharest, she did for the benefit of the surveillance cameras.  It doesn't take us long to get a flashback to this last encounter, when, in the cop's apartment, he and Gilda had sex together.  But it's clear that what she has told the cop, Cristi, on Gomera, is true: the activity in Bucharest was a result of something they are both involved in and their knowing that the police, the same force Cristi belongs to, are watching them.

Cristi has been sent to Gomera by the cops to infiltrate a gang behind a robbery in Bucharest.  However, the gang believes he is on their side, and doublecrossing the cops, and they teach him to learn the language of El Silbo, a language of literal whistles that sound like bird calls.  A whistled language?  Yes, and it's real.  If you go to Wikipedia and look up Silbo Gomero, also known as El Silbo, you find this: "a whistled register of Spanish used by inhabitants of La Gomera in the Canary Islands to communicate across the deep ravines and narrow valleys that radiate through the island. It enables messages to be exchanged over a distance of up to 5 kilometre." 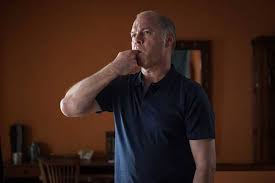 As in Police, Adjective, though in a lighter vein, Corneliu Porumboiu puts the use of language at the core of his crime plot, and we learn, among other things, that one can whistle in different languages.  The group of thieves is made up of both Romanians and Spaniards, and there is a key part, quite amusing, where Cristi whistles to someone in Romanian who passes on the message to someone else in whistled Spanish.  All this during a busy sunlit day in Bucharest.

Vlad Ivanov, who played the cop talking grammar in Police, Adjective, is the lead cop here, and he seems to make a reference to the drug case from the earlier movie.  Still, The Whistlers has a more tongue in cheek tone than Police, Adjecive; that was a procedural and The Whistlers is a noirish caper film.  Nearly every character in it is duplicitous in some way, and there is corruption and negotiation at every turn.  The film unfolds in non-chronological fragments, forcing you to try piecing the puzzle together, and there is just enough meta-movie awareness -- references to Gilda as well as Psycho and The Searchers, among other movies -- without that awareness becoming annoying.
For droll, crime film escapism that has familiar notes but is not cookie-cutter, you can do a lot worse than The Whistlers.

Posted by scott adlerberg at 10:34 AM