The Fun of Regulated Reading

Do you ever regulate your reading?

I was struggling over what term to use so let me just explain. Last year, I did a little experiment. The book of Proverbs has 31 chapters. I decided that for every month that included 31 days, I would read a chapter of Proverbs per day. To keep things interesting, I changed translations every month. Then, at the end, I was able to go back and compare notes and compare verses that I underlined. It was a pretty fun experiment and, except for the transition from July into August, I never had a back to back month.

To January 2021. As I often do, I start to cycle through all of the things that have major anniversaries. Anything with a year ending in one or six are the key ones this year. In the first week, it was the 50th anniversary of Chicago III. That got me to thinking about music and what albums we’re gonna be celebrating major milestone anniversaries. It was my son – – an avid musicologist – – who reminded me I had a book on the shelf about the year 1971 in music. Why not just read it.

The book in question is titled Never a Dull Moment: 1971 The Year Rock Exploded by David Hepworth. It came out in 2016 and I think I might’ve had it since then. Born in 1950, Hepworth came of age about the same time that rock ‘n’ roll did. Those, he was 21 years old during 1971. He has written extensively about music since the 1980s. 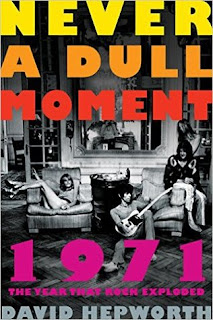 What got me excited about reading this book in 2021 was a table of contents. It is broken out by month. 12 chapters, 12 months, plus an introduction.

As soon as I saw that, I had a brilliant idea: read each chapter at the beginning of each month here in 2021 and go through the year 1971 with Hepworth. I had to read chapter 1 this week, but I'll get to chapter 2  on Monday. and then continue from there. That means Led Zepplin IV is in my future. So is Sticky Finger, Nursery Crime, Hunky Dory, What's Going On, Bryter Later, and Madman Across the Water. That's just the albums I know about. I can't wait to discover new-to-me albums.

And, if chapter one is any indication, this is going to be a blast. Hepworth writes in an engaging style, but primarily he writes only from the limited perspective of that month. He tells you what Bruce Springsteen was doing, the status of the band Slade, and how Yes was reimagining how music was recorded. He even drops a cliffhanger of an ending as the chapter closed about a woman who invented the album business.

But what makes these chapters special is that Hepworth includes a short playlist of songs that were popular in that month. I already made a January 1971 playlist and dang if I haven't discovered a new-to-me band: Badfinger.

Anyway, I don't know if you read books in this regulated manner or not, but I do, and I look forward to learning about 1971 fifty years later.

Are there other books that could be read in a regulated way?