Horror is the Genre of Solitude

I'm reading an excellent collection called The Man Who Collected Machen and Other Weird Tales, by Mark Samuels.  The Machen of the title refers to the great Welsh author of horror fiction, Arthur Machen, who did his best work in the 1890s and the early 1900s, and Samuels is a Brit whose book was published in 2010.  Over the course of about two decades, he's written a slew of tales in the tradition of Machen, Lovecraft, Borges, Ligotti, and other masters of the weird tale, and he happens to be among my favorite living practitioners of this type of story. 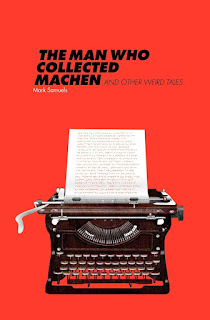 As I made my way through the stories in this book, stories about a traveler in Central Europe, a scholar obsessed with Arthur Machen's writings, an overworked college student who rents a strange, fever-infested house in Mexico, I found myself following, again and again, solitary people who become enmeshed in something bizarre and sinister. In classic horror story fashion, a character (in Samuels' case, usually a man) finds himself discovering a darker and alternate reality behind the mundane one we all live in.  Samuels does fall somewhat in the cosmic horror tradition, though he knows, unlike some who write in this vein, how to keep his prose restrained and evocative at the same time.
But back to this thing about solitary people in horror.  I was reading a horror fiction book review in the New York Times the other day where the reviewer said "Defeating monsters is what horror fiction does best.  By creating stories about the beasts that terrify us -- demons and tyrants, killers and bullies and ghosts -- horror writers lead us into imaginary battles with evil so intimate and powerful that we emerge better prepared to fight real ones."
I can't argue with this description of what horror fiction takes on and does, but aside from the monster-slaying aspect of the genre, is there any other form of fiction that delves so thoroughly and so often into human solitude? When you think of stories like Poe's or Lovecraft's, or the myriad stories influenced by these two, you think of people living their lives with little to no human connections, alone.   Down through the years in horror, how often do you get some variant of a story where a person has an esoteric interest that dominates their lives and leads them so far away from ordinary human interaction that they never return to the commonplace fold.  And it's not just people who experience this intense solitude in horror. Often it's the ghosts themselves who feel it, or the monsters, and it's a reason, besides evil, that these creatures reach out from the other side toward the living.  I can't think of another genre, or any type of fiction really, where so frequently the structure of a plot in some way revolves around a single person, one individual, engaged in a series of actions or caught up in a series of events that they deal with on their own.  The man in the witch house, the woman in the room with the yellow wallpaper, the antiquarian alone at night in the library who opens the book unleashing a specter, the traveler who comes to a town and finds that the inhabitants are mutant freaks, and on and on and on.  Readers know the various tropes.  You do get stories where small groups confront the scary monster or the uncanny phenomena, but even here, frequently, the stories are written in such a way that you get inside the head of each individual to understand what each person's specific fears are, so that, in essence, as the band tries to stick together to take on the threatening force, each person is acting alone, fighting internal demons unique to that individual.  Or you get a person in a story, an adult or a child, who may have friends and may have a family, except that in this story that person has perceptions nobody else has.  The mother with the family, the child with the parents -- they alone can sense or understand the horror that is coming for all.  No one believes this person with the sharpened perception until it is too late.  In their uniqueness, the person with the gift is cursed and thus isolated.  Nobody perhaps sums this all up better than Shirley Jackson;  she lays out the genre's preoccupation in those now iconic opening lines to The Haunting of Hill House, in that paragraph which ends by saying, of the house in question, that "whatever walked there, walked alone."
Maybe it's as simple as that.  Horror fiction is about fear.  It is the fiction that exists to explore human fears.  And when you are scared, truly terrified, it does not matter who you are with or what people say or how they may try to comfort you.  When you're scared, you are, in your mind, totally alone.

Posted by scott adlerberg at 10:00 AM