A look at Northern Irish Noir 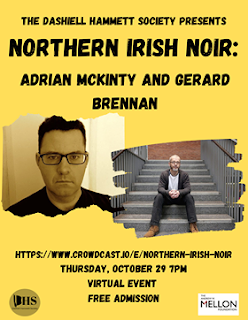 Anjili Babbar and Myron Strong are at it again. Inspiring. Organizing. Advocating. Doing. They are hear today to tell us about the Dashiell Hammett Society, a group dedicated to building literacy and a love of reading and writing in high school and college students, and their upcoming event. Support the next generation of writers and readers and spread the word.

The Dashiell Hammett Society
Presents
Northern Irish Noir:
Adrian McKinty and Gerard Brennan
By Anjili Babbar and Myron T. Strong
The last time we wrote for Do Some Damage, we discussed the ways in which crime fiction can be used to explore diverse perspectives and to promote critical thinking about contemporary social issues in the classroom, outside of the restrictive biases of political discourse. A major characteristic that draws our students to crime fiction is its relatability: it tackles issues that are relevant to their lives, such as racism, poverty, policing, and sexism. Early in 2017, realizing that we could maximize this relatability by connecting our students directly with authors and filmmakers, we established the Dashiell Hammett Society.

The choice of Hammett as a namesake was very deliberate: he has always been a clear favorite of our students, not only due to his Baltimore roots, but also because of his role as president of the New York Civil Rights Congress. Our students view Hammett as a defender of civil rights and free speech, and even as a kind of early feminist, who created powerful, intelligent female characters in his work. They take special pride in the idea that One Calvert Plaza in Baltimore, formerly the Continental Trust Company Building, provided a name for Hammett’s now-legendary detective, the Continental Op.

Our goal for the Dashiell Hammett Society was simple, but huge: to build literacy and critical thinking skills, while simultaneously encouraging a love of reading and writing among college and high school students. It is a testament to the effectiveness of crime fiction in education that, just three years later, the Dashiell Hammett Society is now comprised of faculty and students from four different countries. Contributions from international faculty have allowed us to connect students across borders, giving them access to a wide variety of perspectives. Additionally, public interest has enabled us to connect students with their communities, and to promote the work of a diverse range of authors, both in academia and more broadly.

We offer author events, film festivals, and creative writing workshops. Students are given a safe space to pose questions about literature, the writing process, and social issues: they can either submit questions anonymously in advance of an event or ask the guest speakers directly. Live events are followed by a reception where they can further discuss their thoughts with the speakers and each other. Thanks to an Andrew W. Mellon Foundation grant and donations from publishers, they also receive free books.

In keeping with our critical tradition, our next event is on Northern Irish Noir. Irish crime writers have been at the forefront of the genre in recent years, winning awards and appearing on bestseller lists globally. These authors tackle crime fiction from a nuanced perspective, subverting tropes about secularism and religion, criminal justice and vigilantism, and personal and social identity. Our two guest speakers, Adrian McKinty and Gerard Brennan, also specifically use their work to consider the sectarianism and civil rights issues that led to decades of violence in Northern Ireland, known as the Troubles, and the peace process and large-scale police reform that ultimately brought an end to this conflict. These topics mirror some of the most pressing issues in the United States today.

Adrian McKinty is the New York Times bestselling author of The Chain and the Sean Duffy series, set during the Troubles in Northern Ireland. His works have earned him the Edgar Award, the Theakston Old Peculier Crime Novel of the Year Award, the Ned Kelly Award, the Barry Award, the Audie Award, the Anthony Award, and the International Thriller Writers Award. Gerard Brennan is the author of Disorder, Wee Rockets, Fireproof, Undercover, and The Point. His short stories have been featured in anthologies including The Mammoth Book of Best British Crime and Belfast Noir. He is co-editor of Requiems for the Departed, and has won two Spinetingler Awards, for Best Anthology and Best Novella.

Dr. Myron T. Strong is an award-winning sociologist and writer, whose areas of expertise include the sociology of race, gender, Afro-futurism, and comics. He is Academic Outreach Coordinator for the Dashiell Hammett Society, Executive Council Member for the Eastern Sociological Society, and Co-Chair for the Committee on Community Colleges of the American Sociological Association. Recent publications include the co-authored textbook, Sociology in Stories: A Creative Introduction to a Fascinating Perspective (Kendall Hunt).
Posted by Marietta Miles at 7:36 AM