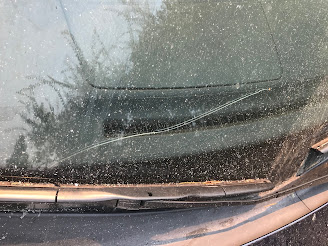 This week, there was a convergence of events in my little corner of the world. One was small—I chose to read a particular book; and one was big—my state is on fire.

Let’s start with the big one. California had a series of lightning storms last weekend that sparked hundreds of wildfires. Dozens of those have exploded into conflagrations that have forced people to flee their homes, shut down major interstates, and sent flames roaring through an old-growth redwood forest.

These fires have also made ash fall from the sky. The sky is brown, the sunlight is dark orange, and the temperature is in the triple digits. It feels like a warped version of the natural world.

Which brings me to the small thing. It involves a book, of course. One that had been on my want-to-read list since it came out in 2015. Regular life and keeping up with books in my own genre of crime fiction meant I never got around to it until a few weeks ago. 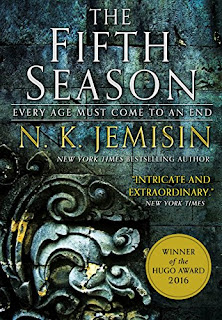 The Fifth Season falls within the fantasy genre. It’s the first book in a trilogy by N.K. Jemisin that imagines a seismically active Earth thousands of years in the future. Volcanic eruptions and earthquakes are common and trigger other environmental disasters. Like ash, falling from the sky.

This was a nice bit of timing for me here in Northern California, but there are plenty of reasons Jemisin’s books would be applicable to you, wherever you live. Everything from The Fifth Season’s world building to character development to the shifting points of view make it a master class in storytelling. And then there’s her voice. That’s the amorphous** something that makes a particular writer’s work her own, that makes a reader fall in love. It’s an unmistakable stamp that—when it’s strong and unique—is what lets readers recognize the author’s work even if her name’s not on the page. It’s the thing that takes a reader by the hand and says, “Come with me, I’m promising you a journey, and I won’t disappoint.”

And let me say this. I opened up The Fifth Season and after the first page, I thought, “okay, this is very promising.” By page three—that’s what, barely 750 words?—I was all hers. I had no idea where she was taking me, but I had complete trust in her to do so. Jemisin had taken my hand.

Jemisin won the Hugo Award, one of science fiction’s top awards, three years in a row—for every book in the trilogy. It’s the only time that’s ever been done.

Because writing at that level book after book, about the same characters, is hard. There was even a faction of the fantasy/sci fi community that actively fought against her because she’s an African-American woman. Neither of those demographics have been historically welcome in the fantasy/sci fi genre.

I’ve now devoured the second volume of the trilogy and am readying myself to return to Jemisin’s ashfall for the third book. Now if only the real life ashfall would stop.