Scott's Note: Lee Matthew Goldberg guest blogs today, talking about his new novel, The Ancestor.  It's a story set in Alaska, in cold cold weather, and in this piece, Lee tells us about the influences -- literary, cinematic, and musical -- that went into its creation.

Ideas tend to materialize in different ways for me. My last book, The Desire Card, was written around the time of Occupy Wall Street when I imagined a one-percenter unable to secure a new liver he desperately needed, despite having all the money to pay. For my second book, The Mentor, I was hired to write a Cape Fear tale set in the publishing world. My debut, Slow Down, came from seeing a tattoo of a yellow circle on the small of someone’s back. I pictured a city where a group of actors had the same tattoo, all of them appearing in a mysterious film. For my newest novel, The Ancestor, I was listening to the song “The Ancestor” by the band Darlingside. I had heard the opening lines where it describes a person being buried, but they will find their way out of the dark someday. From there, the book began to download. I pictured a man buried under ice in the Alaskan wilderness. He wakes with amnesia but has his survival skills intact. He can kill a wolf and skin it to keep warm with its fur. He has a mirror around his neck and sees a reflection of a giant beard consuming his face. There is a hunter named Travis nearby who appears to be his doppelgänger. He follows him home and sees Travis’s wife, Callie, and child, which brings forth a flood of memories of his own family, except they are from the late 1800s—meaning he’s been frozen in time for a century, immersed in ice, and that he may be Travis’s ancestor. 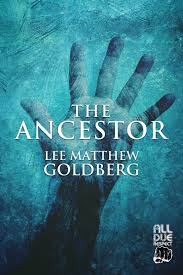 The song “The Ancestor” evoked the mood I was looking for while writing: one of isolation. The ideas marinated for about two years, something I tend to do as the characters become living and breathing. The fictional town of Laner formed, a tiny speck in the middle of nowhere filled with fishermen and those fleeing to the edge of the world. Folks escaping their pasts to a place that freezes for most of the year. The main character, Wyatt, searches for who he truly is, but he’s not the only one. The book is populated with those in flux: a woman working at the local brothel who longs for more, Travis’s wife Callie who’s uprooted from California but has never fit in, Travis’s father Stu, a sheriff whose son drowned due to a criminal underbelly on the outskirts. Each character has something they cannot reconcile.

Alternating between the past and the present, Wyatt remembers more of his life when he was a prospector leaving his family to seek gold in Alaska and the terrible things that led him to his fate. I did extensive research on the Alaskan Gold Rush era. The books Klondike by Pierre Barton and The Floor of Heaven by Harold Blum were a great help along with Dawson City: Frozen Time, a documentary film about a town just south of the Arctic Circle that brought a hundred thousand prospectors to the area. Unlike the California Gold Rush, the Alaskan one was very perilous and many lost their lives in pursuit of gold, adventurers unwilling to give up the lawless days of the Wild West, unable to settle into regular lives. It’s this dogged quest that Wyatt brings back into the present time, remembering the gold he may have hidden before he froze, along with his newfound desire to take Travis’s family as his own when he falls in love with Callie. Despite being partially a historical tale, I wanted the book to bleed from genre to genre. All of my books have thriller elements, but I aspired for this one to read as a literary tale and a historical journey with a sprinkle of the supernatural. If Wyatt isn’t crazy and he really was frozen, what otherworldly presence made this occur, or has it always been inside of him? In terms of fiction, since The Ancestor mixes genres, I was reading a vast array of titles. Cormac McCarthy is one of my favorite authors and his poetic but sparse prose mimicked the type of tone I needed for The Ancestor, so I read Child of God, The Orchard Keeper and Outer Dark, a few of his earlier works. Exclusively, I also read books set in frozen landscapes like The Ploughmen by Kim Zupan, Wintering by Peter Geye, Heroes of the Frontier by Dave Eggers, and The Revenant by Michael Punke. For films, I watched a lot of cold weather thrillers like Wind River, Fargo, The Grey, The Thing,  The Hateful Eight, The Shining and The Revenant again. With any project, I work best when I immerse myself in similar influences. The winter of 2018 was also a very cold one in the Northeast with temperatures dropping below freezing for many days in a row, so it was easy to imagine myself in Alaska in the present time, or during the Gold Rush. It would’ve been impossible for me to write a book like this at any other time of the year and not feel what my characters were experiencing on some level.

Of all of my works, I think this is my deepest novel, a mediation on love lost and unfulfilled dreams. It delves into the idea of identity. If our mind gets stripped away, who are we really? Are we a make-up of our memories and our pasts, or something deeper, passed down through generations from our ancestors that unite us?

I’m excited to finally release The Ancestor into the world.

You can get The Ancestor here.