Jay Stringer and the Fountain of Youth 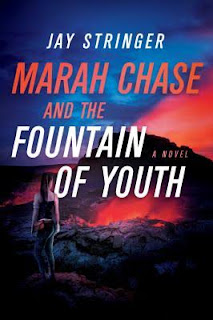 The lovely and talented Jay Stringer, Do Some Damage's co-founder, has a new book out. Let's get to it, then, shall we?
Steve Weddle: How is Marah Chase different at the start of this book than at the start of the last book?

Jay Stringer: One of the things that we don’t talk about much when it comes to Indiana Jones is that he’s a criminal. He’s also steeped in colonialism. He’s stealing shit from other cultures, with a different skin tone, and not bothering to stop and wonder about who owns the things that ‘belong in a museum.’ But he’s played by Harrison Ford and has a nice jacket, so we forgive him. Where was I? Oh yes. So, when I started writing Chase, I wanted to tackle this idea head on. She knows she’s a criminal. She knows what she’s doing is wrong, and she also knows she’s looking the other way on massive issues, like ye olde colonialism, to make a living. At the start of the first book she’s just trying to stay alive and make coin, and can’t let herself think about the moral compromises. In the two years that pass between the books, she’s been given a second chance. She’s cleaned her life up a little, been offered a ‘legit’ job in a museum, and written a book about her career. So it was interesting to explore why she would continue to operate as a relic runner. Now that she’s been offered an out from the dangerous lifestyle, why does she keep going back? I was newly sober while writing this book, but I’m sure that’s just a coincidence.

SW: Marah Chase is described as Indiana Jones, but Jewish, female, and gay. What is it about her that makes her suited for this job?
JS: She wears a leather jacket? I think that's the main qualification needed?

This has been a fun character, because I didn’t decide any of those things up front -outside of knowing she was a bit like Indiana Jones- she told me each of them along the way. Somewhere in the first chapter she told me she was Jewish. I mean, okay? Don’t see why that matters, but I’ll keep note of it, thanks. Then the first time she meets a woman in the story, she told me she was gay. Cool, thanks for the heads up. Her sexuality became relevant in the first book, but I figured her ethnic background was just an extra wee detail.

Then the new book started with her finding the Ark of the Covenant. (Suck that, Jones, you needed a whole movie, Chase needed about six pages.) And a few thousand words later she kept pausing to reflect on what that meant. I was like ‘hey let’s get to the next action scene’ and she was like ‘give me a minute, will you? I’ve never been religious but I was raised Jewish and I just found a box that is fundamental to Judaism, I’ve got some issues to resolve here….’ So that was annoying.

SW: Marah Chase and the Conqueror's Tomb had her being chased around while she looked for Alexander the Great's tomb. What's this one about?
JS: That depends. If you view Raiders as a film about the ark of the covenant, or Jaws as a film about a shark, then this is a book about a treasure hunter searching for the fountain of youth.

For me, it’s probably more about identity, faith, family, climate change, colonialism, cultural appropriation, and the way fascism used capitalism to take control of our society decades ago. Also, water is going to be the next big thing that corporations steal from us and people fight over.

Who am I kidding? It’s about a treasure hunter searching for the fountain of youth. Along the way she goes to Ethiopia, New York, London, and Glasgow. She’s in a race against a group of Nazis who are hiding in plain sight in a large soft drinks company, who want to find the fountain to further their eugenics plan.

SW: Much of the fun in the first book was the Sunday movie matinee feel of a good adventure flick, especially when Marah gets trapped in a tomb that's filling with water and so forth. Assuming you have some high-octane pressure in this one, too?

JS: Oh for sure. There are boat chases. Helicopters. Jokes. Sex. Sabre-toothed tigers. An erupting volcano.

There’s also some added depth. The first book was very much me scratching the itch to write the big fun goofy action story. This time round, the book kept asking me, ‘what else have you got?’

SW: Your first Eoin Miller book came out nearly a decade ago. What have you learned since Old Gold that has helped form this book? Alternatively, how would the books be different had you written Marah Chase back then and Eoin Miller now?
JS: TEN YEARS? TEN? TEN YEARS? (I can fit Grosse Pointe Blank into any conversation.)

I wrote Old Gold in my twenties, I’m hitting forty this month. I’ve learned a lot about listening since then. I always thought of myself as a writer who pushed diversity, but it’s only as the years -and books- went on that I learned to really listen to other people, seek different experiences. I’m proud of Old Gold on a line by line level, there’s some very good writing in there, but I wasn’t ready to escape tropes, and it’s very much a book about a sad man being motivated by a woman’s death.

When it comes to craft I’ve also learned that emotion is the key. We’re emotional creatures, and we seek out art and Entertainment to feel things. There are so many books and blogs that talk about plot, beats, structure, exposition. You do need to know that stuff, but it only works if it’s in service of the reader feeling the emotions. It’s like if you’re telling a joke, you want people to find it funny, you want the audience to enjoy it, all your joke-writing craft needs to be in service of giving them that moment.

SW: I'm getting the feeling this Marah Chase thing is meant to be a series. Tell me about the shorts you've worked on and what's next?
JS: I’d definitely love to do more Chase books. There’s a third one researched and ready to write. I found a really wacky, far out, fringe theory in Arthurian myth, and I can build a whole book around it, to have Chase going in search of Excalibur in an unexpected place. And along the way, I’ll throw in Bigfoot, Men in Black, and knights in armour riding motorcycles. And there are some breadcrumbs I’ve left in the first two books to suggest how the world can get much bigger, and future storylines to be developed. But that’s only if the world wants more.

I’ve just released a short story collection on kindle, Jay Stringer Tells Lies, which is basically all my short stories up to this point, plus some essays and poems. Yes, poems. Fancy.

After that…it’s all a big unknown. I’ve got a couple books written. One is set in New York, Gone Girl meets The Rockford Files. The other is set in Arizona, sort of like who Karen Sisco could have become five years after Out of Sight. But publishing is in a weird place right now, publishers are all chasing the big thriller with the big hook. I’m not really a big hook writer, so I think for me, like a lot of writers, it’s a time to take a step back and figure out where to go next. I was talking to an agent recently who told me Elmore Leonard wouldn’t work now. The thing is, Elmore Leonard didn’t ‘work’ for a long time back then, his books didn’t sell very well for over a decade, but publishers believed in him and supported his work, and then one of his books broke through and he never looked back. Writers aren’t getting that support at the moment. So who knows where publishing will be in five or ten years, once the big-hook era passes, but a lot of interesting writers will have been lost along the way.

SW: Who are you reading now that people should know about?
JS: Untamed Shore by Silvia Moreno-Garcia is a great book. People should check it out. S.A.Cosby’s book deserves all the love being thrown at it. My buddy Johnny Shaw has a book out soon, The Southland. And if you like the Chase books, it’s well worth checking out Matthew Henson and the Ice Temple of Harlem, by Gary Phillips, who can out-pulp me without breaking a sweat.

Marah Chase has everything she wanted. Her academic career is back on track, she’s moved into a Manhattan apartment, and a dream job is waiting at the American Museum of Natural History. So why can’t she seem to stop slipping into her old ways, traveling the world in search of lost relics and buried treasure?

Back out in the field, Chase finds the lost Ark of the Covenant, a discovery that could trigger a holy war, as religions and nations argue over ownership of the sacred item. The Ark also brings Chase into conflict with another legendary relic runner, August Nash, a clash the entire underground smuggling community has been waiting for, and not one that will end anytime soon.

Upon returning home, Chase is hired by US soda billionaire Lauren Stanford to find the Fountain of Youth. At first, Chase dismisses this idea. But then Stanford tells her that an old friend found some information on the Fountain’s location and is now missing. Chase agrees to take the job—but only to find her friend—and enlists allies along the way on a trail from New York to London, and then on to Glasgow. Behind the myth, they find, lies a much older secret, and now they’re in a race to find the Fountain ahead of Nash and his nefarious cohorts. Whoever gets there first will have control over the future of humanity.

Marah Chase and the Fountain of Youth is a tense, exciting, and epic adventure novel, spanning three continents and broadening the world of the Marah Chase series, placing Chase in the unique position to confront questions of identity, faith, imperialism, and appropriation.