Scott's Note:  James McCrone guest blogs today to talk about an anthology he is part of called Low Down Dirty Vote, Vol.2.  It's edited by Mysti Berry and has a forward by Scott Turow, and money raised from sales of the book will go to a worthwhile cause.

Here's James to tell you about it:

First, thanks to Scott and everyone here for giving me an opportunity to make folks aware of the new short story anthology, Low Down Dirty Vote, Vol. 2 –“Every Stolen Vote is a Crime", https://lowdowndirtyvote.com/, which debuted July 4. It’s a stunning collection of crime-fiction that will raise $10,000 for the Southern Poverty Law Center to help fight voter suppression. LDDV, Vol. 1 (2018) has already raised $5,000.

The stories contained in LDDV-v2 are each very different, reflecting the diverse writers who contributed and their varied experiences; and the stories run the gamut of history and geography—stories of disenfranchisement, conspiracy, and murder—held together by the very real threat of voter suppression: Every stolen vote is a crime. Or should be. 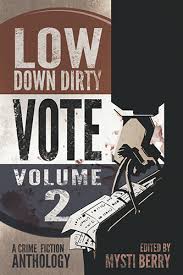 It’s appropriate that I should be talking about my contribution here on Do Some Damage, because that’s what my and the other contributors’ stories are about—damage, suppression, theft. My story “Numbers Don’t Lie,” is a deliberately ironic title from a narrator who never reveals his true name, and who is bent on falsifying the vote tally in a gubernatorial election. The damage he seeks to inflict may reach farther than just this one election he’s been hired for. I did extensive research for the story, and (unfortunately for the nation) there is no dearth of factual examples for what happens.

The narrator—only ever identified as “Mack”—is snarky and contemptuous, and it’s not clear whom he’s working for:

“I guess I felt bad about it, but not bad enough not to do it. The money was right,” he begins.

This story was an exciting departure for me. I’ve been writing political thrillers—novels—exclusively for about five years, and this was a chance to work on something new, to get inside the head of someone new, while still working with subject matter I feel passionate about. For my thrillers, I’ve written in third person, but Mack’s voice asserted itself, demanded attention. He wanted me to hear the story. So I listened and tried to convey the immediacy I heard. He’s a fixer, very good at his job, a conflicted hired gun summoned to ensure election results go the “right” way, but only when everything and everyone else has failed. “Always at the eleventh hour,” he laments.

“Elections were a time to reap what you had sowed—for good and bad. They only called me in when the shit had hit the fan. And this candidate was that.”

“Ideally,” he continues, the only reference to ideals anywhere in the story, except to disparage them, “voters looked at the cases presented during the various campaigns and made their preferences known at the ballot. But we don’t live in an ideal world, and that’s where I come in.”

I was intrigued by what lies beneath his contempt and swagger. Mack is dismissive even of his assistants, because they’re true believers, “which is never a good place to start.” Maybe he knows from intimate experience that it’s a bad starting place. But for him, those doubts, those misgivings are in the past. For this vote theft, Mack tries to craft a “two-fer”—one that will ensure a win for his clients’ candidate, and smear the other side at the same time.

In the end, it’s about more than this one election. My stories—and indeed many in this anthology—seek to reveal not only the crime, but what lies beneath it. There is a great deal of purposeful distraction and canny misdirection in politics these days, to put it mildly. But voting—free and fair elections—confers legitimacy, and it obliges accountability. Any disenfranchised voter, any stolen vote, is a crime.

James McCrone is also the author of the Imogen Trager thriller series, comprising Faithless Elector (2016), Dark Network (2017), and the forthcoming Emergency Powers (Oct. 1, 2020) — political thrillers about a stolen presidency.  A Pacific Northwest native, he now makes his home in South Philadelphia with his wife and three children.  He’s a member of the Sisters in Crime network, Mystery Writers of America, International Association of Crime writers, and Philadelphia Dramatists Center. He has an MFA from the University of Washington, in Seattle. 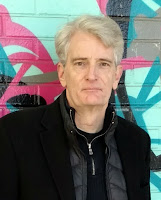 You can pick up Low Down Dirty Vote, Vol. 2 –“Every Stolen Vote is a Crime" right here.
Posted by scott adlerberg at 3:00 AM