🌖
Nicky Murphy is a master of short-stories, flash-fiction, poetry and many other mediums. She has written critically acclaimed shorts for several of your favorite online magazines, including Daddy's Girl for Joe Clifford and Tom Pitts over at Flash Fiction Offensive. Coming from the glorious North of England, Nicky writes far less than she should but when she does it's a doozy. Her stories are often dark and brutal. Two of my favorite things. I am very happy to present two of her flash stories. Enjoy. 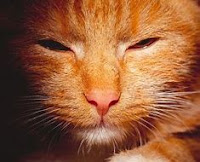 
AN EVERYDAY TALE OF SUBURBIA

The ambulance pulled away from 32 Organza Gardens, in no particular hurry now.

PC Barnaby watched it leave, then closed the front room curtains and sat down on a faded sofa, opposite the old woman huddled on an equally faded armchair.

“Nasty shock, Mrs Miggins,” he soothed. “Finish your cuppa, then I’ll take you to the hospital.”

Mrs. Miggins sipped her tea, her hand trembling ever so slightly.

She put the cup down on the coffee table and dabbed a handkerchief to her eyes.

“Well, who’d have thought it, your Albert being so allergic to cats?” PC Barnaby said, helping himself to a chocolate digestive.

“Anna flacky tic tac or something, so that nice young paramedic said.” Mrs. Miggins sniveled. “Who’d have thought it indeed?”

She dabbed again, and hoped she’d remembered to throw away the can of tuna with which she’d eventually tempted in next door’s ginger tom. 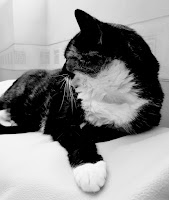 She’s not old, her nose is snub, not hooked. Her cat isn’t black, but a rich ginger. It rides on her shoulders when she cycles through the village and glares at everyone with its one green eye, dismissing them with a hiss.


Joel points and calls, the other children follow. He looks at her and the cat with centuries-long recognition, steeped in smoke and screams.


One morning Joel doesn’t turn up for school.

The woman and her cat are long gone from this earth when Joel is found, submerged and nibbled at the bottom of the village pond. 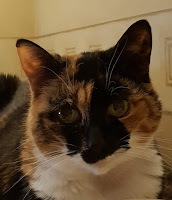 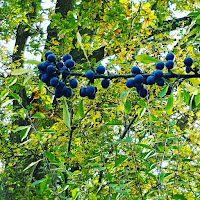 Posted by Marietta Miles at 7:47 AM