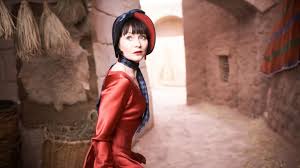 By Claire Booth
This is a public service announcement. You can now see the first season of Miss Fisher’s Murder Mysteries on Amazon Prime. For people who don’t subscribe to Acorn TV, which carries British, Canadian, and Australian content, this is your chance to familiarize yourself with the indomitable and incorrigible Phryne Fisher.
I happened upon this fantastic Australian show when all three seasons were on Netflix a while back (they sadly no longer are). It’s set in 1920s Melbourne and features a protagonist who is decidedly ahead of her time. She’s a woman of independent means and independent mind, and she—naturally—tends to attract trouble. While packing a pistol and wearing gorgeous Roaring Twenties fashion. There are good supporting characters and a dashing police detective for romantic tension.
Like many of the best TV mysteries, this one also is based on a book series. Kerry Greenwood has written Miss Fisher novels since the late 1980s; there are now more than 20 in the series.
The series is so beloved that after the third and final season, a Kickstarter campaign raised funds for a movie. That will premiere this month.
Now let’s circle back to the Amazon Prime streaming, and why it’s ingenious. Acorn TV has exclusive rights to the series, so why would it (or whichever executive from whatever company makes those decisions) let a rival streaming service have one of its prime properties?
For the same reason authors would cut the price of their first book right before the newest one comes out. Hook those readers with the older content so they’ll be there for the new stuff.
And that’s just what Acorn TV is hoping for. The movie will be released in select theaters but primarily be available via streaming on—you guessed it—Acorn TV. And it’s hoping that you’ll think the movie is at least worth the $4.99 subscription charge for the first month. Maybe you’ll like other shows and stick around beyond that. Which is a win-win-win for Acorn.
I’m generally not one to recommend helping a company win, but in this case, I’m going to because as a mystery fan, I’ll also be winning. Miss Fisher is that good. Trust me.