Eryk Pruitt, author of "Townies" (Polis Books, 2018) stops by Do Some Damage to talk about a series he ran on crime fiction this summer. - David Nemeth

If you’re an independent crime writer, then it comes as no surprise to you anymore that it’s difficult AF to get your books into the bookstores. I can remember my early days as a novelist when I thought all I had to do was publish a book and the independent bookstores would clamor to stock my words on their shelves. HAHAHAHAHAHAHA yeah, I remember that.

One time, I called a bookstore and asked them if they would stock my first novel DIRTBAGS. Her answer to my query was “I’m sorry,  but we don’t stock self-published books.”

To which I replied, “Oh, it’s not self-published. I have a publisher and I can put you in touch with them.”

“If that were true,” she told me, “then you wouldn’t be the one calling me.”

Yes, many bookstore owners can be complete dicks.

Many, but not all.

One of the incredible exceptions is Durham’s Regulator Bookshop. I have been fortunate enough to enjoy two book launches (WHAT WE RECKON and TOWNIES) at Regulator and they keep all four of my titles on their shelves. So imagine my happy surprise when they called me up and asked me to plan some events with them over the summer.

I spoke with Elliot, Land, and Amy, who told me they wanted some crime-related events to help spice up the summer. Keeping in mind my past experiences and the very talented pool in which I’ve been fortunate enough to swim, I proposed the following:

We had three Thursdays over June, July, and August. In each sitting, I was joined by some very good friends and writers that I’ve made along the way. Each month, the bookstore stocked three titles that were recommended by me, and the audience was invited to either read them beforehand or pick them up from the store and read them after. 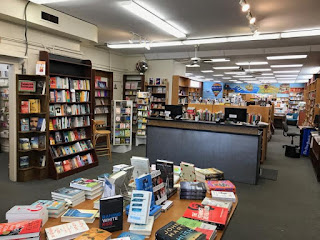 In June, we were joined by DSD contributor David Nemeth, as well as Jeremy Stabile, publisher of ABC Documentation Group, and Shawn Cosby ("My Darkest Prayer"). July saw a visit from Nemeth, Steve Weddle ("Country Hardball)", and Dana King ("Ten-Seven"). In August we featured the novels of Benjamin Whitmer ("Pike"), but also celebrated the book launch of Katy Munger’s latest Casey Jones novel, "Fire and Rain".

We’ve heard lots of talk about how a bookstore should foster a community, especially when those stores are facing down the reality of Amazon. It’s especially awesome to see one step up and actually do it, the way Regulator Bookshop did.

Those books that were featured this summer are still on the shelf in their mystery room. You should run down and buy them now.

Why were those 12 brilliant comments so unceremoniously deleted ?. I thought they were very witty, clever, surreal and absolutely hilarious.

I completely agree Marietta, whoever wrote those comments is indeed a comic genius, its just that we have a strict policy on this site about not allowing trolls no matter how funny they are so i reluctantly had to delete them, sorry about that.

Hi, David,
Thanks for helping to moderate The Regulator's Summer Indie Noir Series! It was a wonderful new program we hope to repeat next summer. We appreciate your taking the time to be an important part of it!
Just a small correction to the post: Eryk Pruitt was invited to help create the Indie Noir Series at The Regulator by its new owners (and longtime Regulator employees), Elliot Berger and *WANDER Lorentz de Haas. They are the ones who bought The Regulator from its founders John Valentine and Tom Campbell. (*LAND Arnold is the owner of Letters Bookshop on Main St. ) Please make the change to the original article, if possible.
Thanks!
Amy Spaulding, Events
The Regulator Bookshop
Durham, NC