Last weekend was the 39th year of Camp NEcon, the NorthEast Writers Convention. I had heard of it from fellow horror writers, but didn't go earlier because I don't write that many horror stories, and wasn't sure I'd fit in. Horror is a broad genre, the horror fans at NEcon are a welcoming bunch, and crime writers and fantasy writers and SF writers and well, all writers will feel right at home there. It's like any other convention, a bit nerdy, but not so much that you won't speak the language. The Booth family has run the event for 39 years and their experience shows. It was one of the best run conventions I've ever attended.

It was unfortunate that one of the guests of honor, Megan Abbott, couldn't make it this year. She was missed, and we had conversations about how well she writes about class distinctions, the dangerous obsessions of groups--whether they be competitive cheerleaders, parents of gymnasts, lab chemists, cozy suburbs, or high school cliques--and how her work fills us with unease. I hope Megan can attend another year! Guests of Honor included John Langan, author of The Fisherman and many unsettling short stories, poet Linda Addison, artist Reiko Murakami, and writer Grady Hendrix, author of My Best Friend's Exorcism, We Sold Our Souls, and the mass market horror boom retrospective  Paperbacks from Hell.

I arrived Thursday afternoon after a hellish drive north up I-95 through the remnants of Hurricane Barry, which made for a six hour trip. So, I was extremely grateful to be welcomed at registration with not only my badge, but my hotel room key. After dumping my duffel of goofy shirts and books to be signed in my room--a dorm room, a little threadworn but quite comfortable, and included in the registration price--I bumped into authors Bracken MacLeod and Errick Nunnally, two friends I first met online. They are the Frick and Frack of NeCon, seasoned veterans of the event, and great ambassadors for both NeCon and their genres. Bracken is the author of the creepy Arctic thriller Stranded and the crime thriller Mountain Home; Errick has written horror such as Blood for the Sun and an intriguing superhero novel that comes out in September from ChiZine Publications, Lightning Wears a Red Cape.

We immediately hugged, talked shit, and whiskeyed up. I was introduced to more people in less time that in the famous scene in Goodfellas, and everyone was genuine and friendly. Unlike a lot of genre cons, NeCon has no hierarchy of writer-publisher-fan, everyone is on the same level. Over the course of the weekend I would have long conversations with fans, editors, publishers, and authors at the same tables or huddles, everyone from editor Jaime Levine, authors Dana Cameron, Laird Barron, Paul Tremblay, GoH John Langan, con organizers Dan Booth & family, new writer Chris Nova (who will have a story in Angel Luis Colón's upcoming Puerto Rico anthology, ¡Pa'Que Tu Lo Sepas!), artist Dyer Wilk, and so many more. It's an inclusive con. They have an orientation on day one to help new attendees, and they are helpful to us folks with social anxiety. They also have a final panel on Sunday to hear suggestions on what people want to see, and what they can do better.

NeCon operates differently than most. They take over an entire dorm at Roger Williams University, and your registration includes half a room and three meals a day at the fully staffed cafeteria, with a chef who will make vegan, allergen-friendly, and other meals if you have such needs. There is also dessert. A cold brew coffee fountain. And on two nights, they have weenie roasts of local hot dogs called "Saugies," which I'd never had before. They're a good dog. I'll stick with Usinger's as my personal favorite, but they were good, and they had vegan dogs too. All included in the $475 registration. Now, you have to share a room. But you can sign up with a friend, ask for a quiet or a party room, get a first floor room if you don't like stairs. Sharing a room is what made me anxious until I scanned the guest list and asked people I knew if they were free. The con organizers are very helpful and answer questions via email. If you absolutely don't want to share a room, there are local hotels, but they fill up fast during the summer season, and you will miss some of the camaraderie. They offer day passes without rooms and food. I nearly went for this method but I'm very glad I didn't.

Thursday is mostly for meeting old friends, and they have a Saugy roast and a Scotch tasting, so we rushed to the local liquor store and I grabbed a bottle of Jura, a smooth entry-level Islay scotch. I'd brought a bottle of Laphroaig for those of us who enjoy a shovelful of ashes in our mouth, but felt that was cheating--it would be the least tippled bottle--and I didn't want to be a schnorrer, so I bought a fresh bottle and none of it came home. Dana Cameron brought two, including a Balvenie she bottled herself at the distillery, Bracken brought Japanese whisky, and I don't remember much after that. People who don't like whiskey had wheated bourbon, a Chinese sorghum liquor, and those who don't drink alcohol had sweet tea and lemonade from the cafeteria, and were welcome to sniff the smoky Peat Monster and gym sock aroma of the sorghum booze.

Starting a con with 12 or 14 tastes of whiskey is not advised. But I was there for the 8:00am breakfast. I ate all the bacon and eggs they had. By 7pm and three huge tumblers of iced cold brew coffee, I was feeling human again, and I paced myself better. The panels were nicely varied, with new authors alongside seasoned pros like Christopher Golden, and they had a noir panel on Sunday--noir can't catch a break, but isn't that sort of the point? It was well attended, to my surprise. These con-goers back each other up, and I dig that.

This one has a feel more like the cozier regional crime cons like Left Coast, with no competing panels, so you don't have to choose between friends or talk to an empty room because you're up against the Guests of Honor. They don't give awards, so there's no competition anxiety there, either. They roast one lucky person on Saturday night, but it was good-natured fun. And they don't roast you in a giant Wicker Man, thankfully. There are just enough events that you have plenty of time to talk with people; you can sign up for mini-golf, foosball, ping pong, RPG playing, and much more. Or you can... not. The dealer's room includes the art show, and you can sell your own books at the Meet the Authors event where the writers take over the cafeteria and lure readers to their tables with candy, tchotchkes, and their cosmic hypnotic mind powers.

The con is held in Portsmouth Rhode Island, with some nearby beaches, parks, a classic car museum, and a cannabis dispensary across the border in Massachusetts. It's near Providence, which lends itself to Lovecraft tours and trips to the art museum, and it's an hour or so south of the Edward Gorey House, if you want to visit. My Gashlycrumb Tinies shirt went over well, he's beloved in the horror genre. I was witness to no drama. Strangers were friendly and happy to introduce themselves and talk, or you can read, write, or thumb your phone and be left alone, if you needed it. There's a koffee klatsch room for discussions of the best books, movies, and TV of the year, which is a good way to meet new people.

I bought a lot of books. My goodie bag included The City of Lost Fortunes by Bryan Camp, but I picked up everything from Frozen Hell, the newly expanded version of "Who Goes There?"--the short story that inspired The Thing--by James Campbell, to books by Grady Hendrix, Paul Tremblay, John Langan, Bracken MacLeod, and a chapbook with teaser chapters of Errick Nunnally's new novel and Craig Wolf's The Queen of the Nightbirds, an art print of a cover Jill Baumann painted for Jack Williamson's creepy classic Darker Than You Think, and a forged iron twisty dagger dingus by John Harvey: 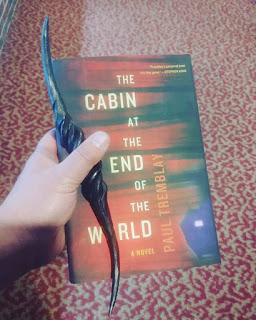 I was sad to go before the "how we doin'?" panel and the farewell picnic, but I was eager to return home and be harassed for affection from Louie Loaf, and to jump into the building's pool to assuage the Perfectly Normal Heat Wave that is melting Siberia and the Arctic and That Is Totally Fine.

I did get to say thanks to the con runners and the folks to made me feel welcome at my first NeCon, before embarking on the haunted giant lizard spine of Interstate 95 in Connecticut, who are unarguably The Worst Drivers in the Western Hemisphere.

See you next year at NeCon! It's not a Midsommar ritual sacrifice, I promise!