I'm kind of a serial killer hipster. I was a fan before they were popular.
Well, not a fan, but I was intrigued by the macabre, and now they have absorbed enough American kitsch that they are corn on the macabre. (That pun is for Dave White).

Before I read The Silence of the Lambs I was a gore punk who read about Ed Gein and watched Faces of Death and thought I was so cool because I knew about killers like Albert Fish and had read the journals of Carl Panzram, one of the earliest documented psychopaths. It's a sheltered suburban kid thing. And while I did grow up on the literal wrong side of the tracks (see photo), those tracks were in the town where Martha Stewart graduated high school, so they were relatively cushy, even if we had a superfund site, played soccer on a former quarry capped with landfill, and found gay porn novels and used contraceptive sponges behind our grammar school. 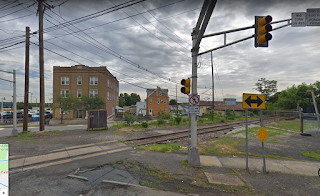 After Hannibal Lecter nibbled his way to America's heart, serial killers were everywhere in movies, books, and TV shows as the go-to bugaboo, and they have stayed at the top ever since. The FBI profiler and self-salesman John E. Douglas wrote a bunch of books with Mark Olshaker expounding his genius, and ignoring all the times his "profiles" failed, like with the Baton Rouge serial killer Derrick Todd Lee, who was able to avoid capture while the police looked for a white man, because the victims were all white women, and we were told that serial killers--ahem, SK's, sorry, gotta use the lingo--preferred victims of their own race. This would later stymie attempts to capture the D.C. sniper, as well. I'm not saying that it isn't a good rule of thumb, but when you use it to automatically exclude suspects, you need to take into consideration that profiling is not a hard science.

I was an acolyte of Mr Douglas for a while, and even began a successful petition to keep a child murderer that he helped capture from getting early parole. So I'm going to talk about two lesser-known serial killer movies, one good, one bad, because at first glance the good one looks bad and vice versa.

The first one stars Charles Bronson in his post-Death Wish days and the second stars Kevin Kline as a brainy police sleuth. See where I'm going? I'm less inclined to think Kevin would star in a stinker, but The January Man is probably one of the most entertaining, yet badly written movies about serial killers out there. Now, the movie has a lot going for it, and if you ignore the serial killer's modus operandi, you can enjoy it. Kline co-stars with Susan Sarandon, Alan Rickman, and Mary Elizabeth Mastrantonio, and the script was written by John Patrick Shanley, who also penned Moonstruck, Joe Vs. the Volcano, and adapted Doubt for the screen.  He's no slouch!

The January Man was released in 1989, so I can't imagine the screenplay being written to latch onto the success of Silence of the Lambs, which was published in 1988. Where did he get his ideas about how a serial killer behaved?

I'm about to ruin the twists of the movie, which really isn't about the twists anyway. It's about spending time with Kline, Sarandon, Rickman, and Mastrantonio, as they hunt a killer who strangles women who live in high-rises, exclusively. How does he choose them? I forgot that, honestly. But I do remember that he chooses the floor that his victims live on by pretending all the high rises in the city are a musical scale, and their windows occupy the spaces that the notes to "Calendar Girl" by Neil Sedaka. 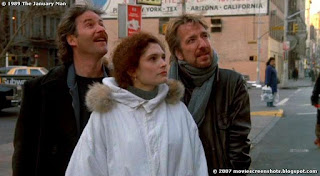 Yes, really. Mastermind Kline manages to predict the building and the floor of the next victim because the previous ones are done to the tune, and Mastrantonio poses as bait, wearing a neck protector so they can catch the killer. And when they pull of his mask, someone asks, Who is he?
"Nobody," Kline replies. Because at this point we weren't overwhelmed with serial killers, and expected the killer to be someone we could deduce from the cast. Aha!
The movie is far from satisfying, but you get to see Alan Rickman play a painter who works in nudes, and Mastrantonio and Kline are always fun to watch. My friend JD at Radiator Heaven wrote a detailed review, if you want to dig deeper. The movie will frustrate anyone who isn't a big fan of The Cell, which was another movie with great visuals and a terrible script, where the killer gets off on drowning women in a box kept in secret locations, on a timer, while Vince Vaughn races against the clock. The part where Jennifer Lopez enters the mind of Vincent Donofrio (the killer) to unravel his psychosis and find the victim is idiotic but beautiful, like a unicorn trying to play the piano.

So, what's the surprisingly good serial killer movie? 10 to Midnight, starring Charles Bronson. This one was written by William Roberts, who wrote the screenplay for The Magnificent Seven, and it's lurid and sleazy, but portrays a much more realistic serial killer. Gene Davis plays the part and gives it all. He's a often a small part character actor, but this role has him glaring at photos of his mom while sucking raw eggs out of the shell, chasing victims through the park while completely naked, and otherwise gnawing the scenery with his mental torment.
Now, this doesn't mean the movie is a masterpiece. It's an exploitation slasher in the vein of Vice Squad and makes the misogyny of its killer very obvious if oblique, with Bronson scowling as he recites lines like, "this killer mistook his knife for his penis." 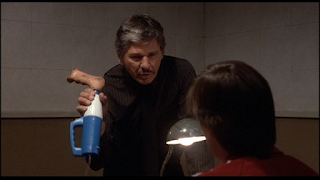 Bronson with the killer's jackin'-off-hammer.

To be honest, the most memorable part of the movie is the ending, which I'm going to spoil for you. Bronson catches the killer, after he leaves a bunch of naked young women dead. And being who he is, the killer has to brag that he's sick in the head and will be released soon, and come after his daughter, and "you'll see me again!"
Let me see if you can guess what Bronson says before he shoots the unarmed killer in front of everybody.
.
..
...
....
"NO, WE WON'T!" 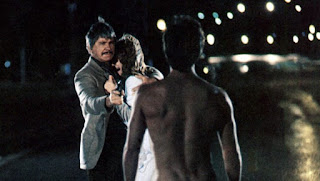 So I spent all this time slamming serial killer stories. I really like Red Dragon by Thomas Harris, and feel that is the paragon of the form. I'm told By Reason of Insanity predates it, but after slogging through The Anvil Chorus by Shane Stevens, I won't be reading him again. The Wicked Girls by Alex Marwood is quite good, but even modern serial killer novels often rely on lazy tropes like The Evil Foster Child and The Serial Killer Gene, when it doesn't work that way. I'd be interested in a fictional take on the BTK Killer (other than Red Dragon) now that he has been captured. His family claims to have been completely unaware of his sideline as a family slaughterer, and he was a deacon in his local church. He was able to stop, something we're told serial killers don't do.

You know what they say, sometimes you have to write it yourself.
The next book I'm working on will continue this old story of mine, The Uncleared.

I still think the finest serial killer novel may be Dorothy Hughes' In a Lonely Place, which predates even Thompsons gleeful killer. Hughes has subtlety and intelligence so it's not for everyone (joke). But it's also deeply chilling because she shows such complete understanding of the mind of this killer and how he works. Brilliant book.

Yes, a favorite book of mine. Hughes captures the fragile masculinity of the killer perfectly.