On rediscovering the joy of reading. 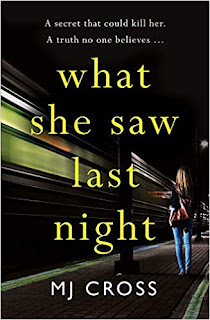 Jenny Bowen is going home. Boarding the Caledonian Sleeper, all she wants to do is forget about her upcoming divorce and relax on the ten-hour journey through the night.
In her search for her cabin, Jenny helps a panicked woman with a young girl she assumes to be her daughter. Then she finds her compartment and falls straight to sleep.
Waking in the night, Jenny discovers the woman dead in her cabin ... but there's no sign of the little girl. The train company have no record of a child being booked on the train, and CCTV shows the dead woman boarding alone.

I spent most of my childhood and teen years escaping from the world in fiction, and it feels like it’s been a while since I did so with any regularity. Oh, there are still writers who I will devour, into whose worlds I’ll happily bury myself, but a sense of professional obligation – you have, says the prevalent wisdom, to keep abreast of what’s current if you want to be a writer of commercial fiction – can sometimes suck the joy out of the act, make it more work than pleasure.

What She Saw Last Night (or, from here on in, WSSLN) is one of those books whose premise you’ve seen before. It’s “The Lady Vanishes” on a contemporary train, crossed with elements of the Jodie Foster movie “Flightplan.”

But it’s in the execution that the book soars, and in the sheer rollercoaster exhilaration of the plotting that I forgot I was a crime writer and remembered how amazing it can be when a book just grabs you like quicksand and won’t let go.

Saying anything much about the plot will inevitably involve spoilers, so let me avoid this by stating simply that the initial premise is swiftly subverted: The whole thing doesn’t take place on board the train and so the claustrophobia of the previously noted pieces is discarded and replaced, instead with a classic paranoid chase thriller.

There was a girl. And there are some very – and I mean very – bad dudes who want to stop anyone asking questions about her.

In Jenny we get a classic everywoman hero: Someone who’s out of her depth but uses her real-life skills (she’s a wonderfully prosaic IT project manager) to attack the puzzle logically, and the couple of references to Agile (a project management approach that basically seems to boil down to ‘poke it with a stick and, if it hisses at you, back off and try poking another part’) made me chuckle heartily, while allowing Jenny to steadily unpick the mystery, unknowingly getting closer and closer to the very bad dudes running the show.

WSSLN is a perfect beach read, a perfect commute read, a proper page-turner thriller and one that reminded me of how much joy there is in a story that you can’t wait to get back to. Highly recommended.


Derek Farrell is the author of Death of an Angel and three other Danny Bird Mysteries.

The books have been described as "Like the Thin Man meets Will & Grace," like MC Beaton on MDMA," and - by no less an expert than Eric Idle - as "Quite Fun."

Farrell is married and lives with his husband in West Sussex.

They have no goats chickens, children or pets, but they do have every Kylie Minogue record ever made.
Posted by Derek Farrell at 7:00 AM