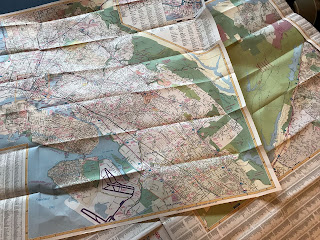 I’m currently plotting my next book. I don’t mean plotting as in story ideas. I mean getting out a map and figuring where to put things.
This part of writing always brings up questions that can get trickier than whether my character should live in Oakland or Berkeley. The most consistent is whether I should stick with reality or make something up. The answer varies depending on the needs of my story—and my need not to get sued.
If the scene calls for a bustling restaurant in a busy commercial district, I’m probably safe using a real one if my characters are having a nice meal while gossiping about their co-workers. If they need to find a dead body—or worse, a rat infestation—I’m definitely better off making up an eatery and being vague on the location (the crowded restaurant was on Solano Avenue).
The same goes for where characters live. It’s not advisable to use an actual address, but saying “The house was a restored Craftsman on Elm Street” will work fine, unless Elm Street has only one Craftsman that can be easily identified in real life. If that’s the case, I can broaden it: “A restored Craftsman in the South City neighborhood.” Or I can consider making up an entire street. This can be really freeing—I can set an apartment building on fire, or turn a house down the street into a drug den, or do anything else I need to help advance my story.
Sometimes, though, real buildings are necessary. Maybe a story absolutely has to have a character live, say, in the famous Dakota apartment building in New York City. In a situation like this, I would probably make up an apartment number. That would get me a real place with just enough distance for fictional freedom.
Sometimes I really have to search for what I need. My current hunt is for a deserted, middle-of-nowhere location that still is within a specific distance from my character’s home. This is turning out to be tougher than I thought it would be. (And yes, I realize I wouldn’t be having this problem if I hadn’t set the book in the seven-million-resident Bay Area.) So for this, I dusted off the real, honest-to-goodness paper maps. For me, they work much better as I spatially orient myself. They’re also wonderful for writing on, which makes it a lot easier as I go back again and again the further I get into my manuscript.
When you write, how do you decide on your locations? Do you fictionalize? And when you read, do you check to see if the locations in the book are real?
Posted by Claire Booth at 3:00 AM