Just a Crime Fiction Author and Her Lock Picks

In my previous post a couple weeks ago, I referenced the fact that I know how to pick locks. Several of you were curious about how I came about this skill. So today I decided to share that little story.

Just as a caveat, this is a post about my experience with locksport, which Wikipedia defines as the sport or recreation of defeating locking systems. It should in no way be an encouragement to anyone to attempt defeating locks for the purposes of trespass, theft, or any other unlawful activity. 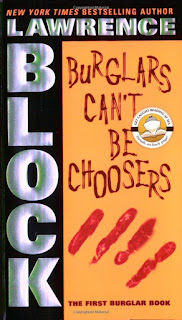 My initial interest in lock picking began when, as a teenager,  I started reading Lawrence Block's Bernie Rhodenbarr cozy series about a cat burglar who occasionally stumbles upon dead bodies. If you haven't read any of this series, I highly recommend them.

I was instantly fascinated with how dear Bernie could take a few pieces of spring steel and tickle the tumblers into giving up their secrets.

I so wanted to be able to do this. Not to steal from anyone, but for the sheer challenge of defeating a lock and exploring places where I'm not supposed to be. Bad Dharma! I know.

A few years later my curiosity in locksport rose again. I don't remember why. Maybe I started reading some more in the Bernie Rhodenbarr series.

It was the early 1990s, and I had no way to buy an actual lock pick set. But I did have other tools. A library card. A letter opener. Aluminum cans. You'd be surprised how simple everyday items can be used to defeat locks.

I confess I did use my limited skills to access some places I shouldn't. My mother's car. My manager's office at the radio station where I worked. A neighbor's apartment. I didn't steal anything. It was all about the thrill.

Let me reiterate this point. Don't break into other people's private spaces without their permission. It's illegal.

Also, alarm and surveillance systems have become much more sophisticated. The thrill isn't worth spending a few years in a medium security prison. Trust me.

For reasons I'd rather not get into here (read: serious consequences), I put my love of locksport on hold for a long while.

And then about five years ago, I was working out of Gangplank, a collaborative workspace in Avondale, Arizona. The building had been a bank originally, then Avondale City Hall, then the West Valley Arts Council, before becoming Gangplank, whose motto is "Be Dangerous."

Because of its various incarnations over the years, the building had a few interior doors with keyed locks for which we did not have keys. This became a problem one morning when a member's kid locked one of the meeting rooms, leaving us with no way to open it. 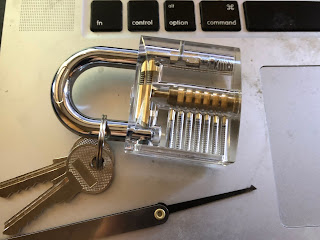 Fortunately one of our other members' wives had a lock pick set. But she didn't have time to pick the lock. So while we waited for her to show up with her bits of spring steel, I went on YouTube to brush up on my lock picking skills.

The pick set arrived. I set to work, and five minutes later, I had tickled the tumblers, turned the cylinder, and opened the door.

Hurrah for Dharma, that hero and rapscallion!

Some months later my skills were called upon again to access the broom closet which some doofus had accidentally locked.

I still love practicing on defeating locks. But I no longer try to access places I have no legal right to be in. Locksport isn't about breaking and entering. It's about problem-solving and creative thinking. And it's just a whole lotta fun.

If you're interested in learning more about locksport, you can visit Locksport International or search for videos on the subject on Youtube. Be aware that possession of lock picking tools is illegal in some places. Familiarize yourself with the laws where you live.

As one of the only transgender authors in crime fiction, Dharma Kelleher brings a unique voice to the genre, specializing in gritty crime fiction with a feminist kick. She rides a motorcycle, picks locks, and has a dark past she’d rather forget.