By Claire Booth
I’ve spent the past four days at Left Coast Crime, a convention focused on crime fiction about and by authors from the West Coast. It’s one of my favorite conventions because of its atmosphere. It’s homey and welcoming to everyone, even if the subject is serial killers (which was an actual panel).
This year, we had the added bonus of a rare sunny week in March in Vancouver. 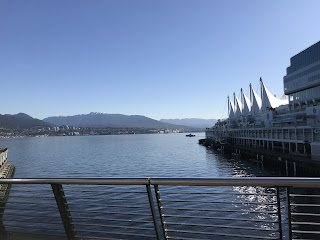 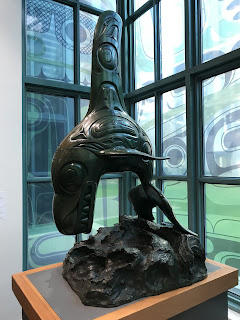 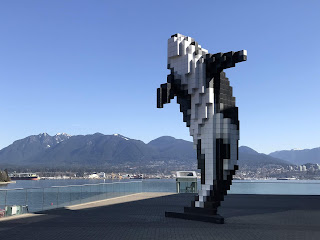 When not out enjoying the staggeringly beautiful scenery and artwork, there were dozens of panel discussions to chose from. The most fascinating one I attended was about dyslexia. Three writers and an editor with dyslexia spoke about how they think and how they weren’t diagnosed until much later than they should have been. 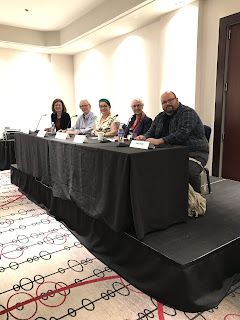 Me, Stephen Buehler, Renee, Amy S. Peele, and Sam Wiebe
I moderated a panel called “Our Past as Inspiration.” I talked very briefly about my background as a reporter and moved quickly to the others, including fellow DSDer Renee Asher Pickup. It was alternately moving and humorous to hear stories of how authors backgrounds play into their writing and choices regarding characters and plots.

I ran into AJ Devlin, who dedicated readers will remember guest posted on DSD about this time last year. His debut novel, Cobra Clutch, was up for the Lefty Award for best first novel. (It’s about a semi-pro wrestler and a kidnapped snake. Go read it. Trust me.) I met AJ at the Bouchercon crime fiction convention in Toronto in 2017. His novel hadn’t come out yet, but we stayed in touch. It was great to see him again and fantastic to see his success.

That’s a lot of what these conventions are about. First and foremost, they’re about connecting with readers. But they also allow us writers to reconnect with one another. It’s a job with an awful lot of solitude built into it, and so an opportunity to socialize with people who understand what you do is something to be treasured.
Posted by Claire Booth at 3:00 AM

Looks like a great town for a con.
Glad y'all had a blast.

It was great meeting you! Darn, I didn't get to see the Lego orca!

The Lego orca was awesome. And it was designed by Douglas Coupland, the same guy who wrote Generation X. So as part of that fabulous generation, it made me love the orca even more!