Acclaimed fiction author Eryk Pruitt (Dirtbags, What We Reckon) has announced that he is editing a #MeToo inspired crime fiction anthology with ten of crime fiction’s top authors. The collection, expected out in October, 2019, promises to “give voice to a serious problem affecting society.”

Dennis Lanana’s “Not On My Watch” features a kick-ass female protagonist who tells her boss #TimesUp when he crosses a line. Joseph T. Miller showcases a kick-ass female protagonist in his short story “Cook Your Own Dish Best Served Cold.” And Thomas Catton brings a fresh, new perspective with “One Of The Good Ones,” about a well-meaning man who is falsely accused of something horrible. 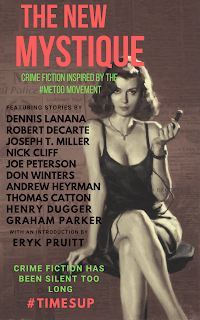 “We have to accept that, in 2019, women have a place in fiction,” says Pruitt, who was nominated for the prestigious Anthony Award in 2018. “We are so lucky to have found ten authors who can give a voice to a demographic and a situation who have previously been kept silent.”

Joe Peterson, whose story “Femme Fatale Attraction” features a kick-ass female protagonist who turns the tables on a man with whom she had been carrying on an affair. While many people think this story may mirror an actual event in his person life, Pruitt is quick to shrug that off.

“You have to separate the art from the artist,” Pruitt says. “If we held people accountable for all their past actions, then we’d have no one eligible to tell the stories of these kick-ass female protagonists.”

So far, no one has responded to Pruitt’s offer to publish the anthology.

Pruitt will not be fazed. “Readers are ready. Crime fiction has been silent for too long. Time’s up.”

The New Mystique will be released in Fall of 2019, in advance of Bouchercon, the crime writer convention held in Dallas, Texas.
Posted by Steve Weddle at 4:41 AM

I find it so strange that the stories are all by men. Perhaps I am misunderstanding the mission.

Thanks for the invitation, Eryk.

I'm honored to have been asked to contribute. It is far, far past time that women were seen as more than femme fatales in crime fiction.

I have three daughters myself and two ex-wives (still on friendly terms), and I think they need crime fiction stories with characters they can admire -- strong female characters, as tough as they are beautiful.

Keep up the good work, brother.

The only man-editor more qualified than Eryk Pruitt to lead this project is Otto Penzler, amirite? Regardless, with this stellar group of man-writers, this anthology can't miss.