A DEADLY TURN in the Right Direction 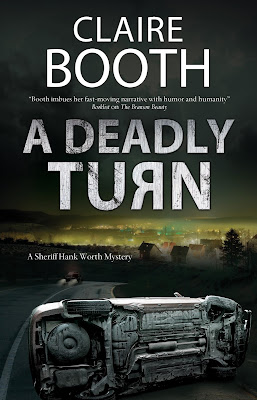 It’s finally here. A Deadly Turn hits shelves this Friday. It’s the third in my Sheriff Hank Worth mystery series, and I’m really excited for people to finally have the chance to read it.
The first two books in the series came out almost exactly one year apart. This one took longer because I switched publishers, so it’s been a year and a half since the last Hank book. I’m beyond thrilled that I have readers who’ve told me how much they’ve missed him.

If you’re familiar with the other books, you’ve probably noticed a substantially different look to the cover of this one. That’s because Severn House, my new publishing home, decided to take the artwork in a more realistic direction instead of staying with the oil-painting look of the others. I gotta say, I love it. That overturned car is absolutely perfect.
Working with Severn House meant a few other changes as well. The company is located in London, so I had to calculate an eight-hour time difference, instead of the easily handled three-hour difference with New York. I finally settled on emailing him in the evening, so he would get it bright and early the next morning. If I waited until my “next morning,” he’d be heading out the door to go home for the day.
The email version of jet lag was worth it, though. The people at Severn really “got” Hank and his two deputies, Sheila and Sam—Hank with his wry humor and often overwhelmed attempts at managing a sheriff’s department; Sheila with her no-nonsense demeanor and quietly confident knowledge that she’d be a better boss; and Sam with his puppy-like eagerness slowly giving way to savvy adult. A writer’s greatest fear (well, my greatest, at least) is to land an editor who sucks all the life out of the book. That didn’t happen with A Deadly Turn, and I’m happy to let it out into the world.
Here’s a little more about it:
Hank Worth thinks he’s performed a good deed when he pulls over the car of six teens caught speeding on a Saturday night and lets them off with a warning and instructions to go home. When he responds to an urgent call minutes later, he realizes he made a fatal error of judgement—every teen is dead. Struggling to come to terms with his role in the crash, Hank begins to suspect foul play. While notifying the parents of the children involved, his suspicions grow when an unidentified body is discovered in one of their homes and a teenage girl is found after apparently attempting to commit suicide. Hank believes the incidents are connected, but those around him disagree. Is Hank right, or is his guilt making him search for answers where there are none?
You can find A Deadly Turn at any of the following booksellers.
IndieBound
Amazon
Barnes & Noble
Books-A-Million
Posted by Claire Booth at 3:00 AM

I also love the new cover art. It's more modern and hooks me a little more than the other covers.

And this plot sounds really interesting! Congratulations on this latest book coming out!

I haven't read your work and am not familiar with the Sheriff. However, this blurb sounds so good I think I'll start at the beginning.