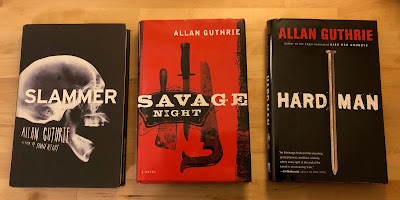 Back in August 2018, Brian Lindenmuth posted a thread on Twitter about Allan Guthrie and his books which Lindenmuth followed up with a post at Toe Six Press, "I come to praise Allan Guthrie, not bury him". The praise was high and the books were cheap. I bring this up now because Sandra Seamans at her excellent blog My Little Corner wrote a short piece on Guthrie and his rules for writing.

Every writer has their own rules though most of them are unspoken.

There are many rules for writing out there, rules by Elmore Leonard, Kurt Vonnegut and Henry Miller register. A brief Bing search shows that there are more, a lot more: rules by Zadie Smith, Erica Jong, Janet Fitch, etc. There are even infamous rules.

In 2010, Guthrie wrote "Hunting Down The Pleonasms". Or is it called  "32 Writing Rules"? It's not clear. Ambiguity in writing rules is one of the themes that many have, so the uncertainty of Guthrie's title pleases me.


I can’t stress strongly enough that writing is subjective. We all strive for different goals. Consequently, we all need our own set of rules—and some of us don’t need rules at all! Personally, I like rules. If nothing else, it’s fun breaking them.

I say no rules is a rule in itself, but let's not go down that rabbit hole.

Guthrie covers the usual writing rules and does so with drollery. On show don't tell, Guthrie writes, "Much vaunted advice, yet rarely heeded." He goes on:


If you want to engage your readers, don’t explain everything to them. Show them what’s happening and allow their intelligence to do the rest. And there’s a bonus to this approach. Because movies, of necessity, show rather than tell, this approach to your writing will help when it’s time to begin work on the screenplay adaptation of your novel!

Some rules delve into Guthrie's own writing style, after all these are his rules, "Vary your sentence lengths. I tend to write short, and it’s amazing what a difference combing a couple of sentences can make." Other rules are a punch in the face, "Smiling sadly is a capital offence." There is a pronoun lesson––rule number 30––and it begins, "Pronouns are big trouble for such little words."

We read writing rules because we need writing rules. We pick the ones that resonate as we form our own set of rules, rules that help us put pen to blank page. Joe Lansdale's quote, "I write like everyone I know is dead" is taped to the wall beside one writer friend's desk. Me, I try to remove every just or very in my prose. Whether our rules have physical manifestations or swim about in our cerebral cortex, they are there.

Read Guthrie's rules and steal what you like. I'm sure he won't mind.

Respecting your readers' intelligence is a big one. So much of popular fiction is a retelling of what went on a couple chapters back. I think that's a similar impulse in television story-telling, when you come back from a commercial and they recap what just went on. Commercial breaks can be as long as three minutes, so the morons might have forgotten. Best remind them, because we want to reach most people here, and we are aware that most people are idiots.
"Allow their intelligence to do the rest" is a rule I can get behind.