When the editor of one of your favorite crime fiction publishers reaches out to you saying he has some thoughts about writing violence and asks if you'd like to post it, the answer is always yes. – David Nemeth 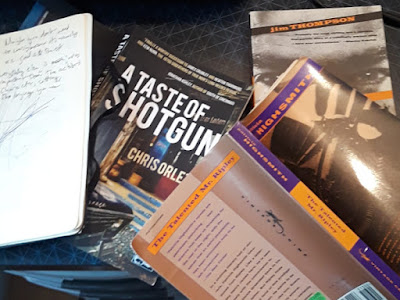 Recently David Nemeth had an excellent post on fight scenes. He has two rules of writing fight scenes that I’m on board with: 1) be brief, 2) make sure people get hurt.

This post got me thinking about writing violence in general.

I’m the publisher for All Due Respect, and we’ve published some seriously violent books. The Selena series by Greg Barth is drenched in blood. Tom Leins’ Repetition Kills You, and everything he’s written, has violence on almost every page.

Yet I’m not of the opinion that violence is necessary for an excellent crime fiction book. Many of the best in the genre, take Patricia Highsmith’s Strangers on a Train or Fuminori Nakamura’s The Thief, have almost no violence.

I’d say I encounter too many manuscripts that assume violence = interesting. This often surfaces on the first few pages involving torture, explosions, or other elements that are supposed to engage the reader. This doesn’t do much for me.

I don’t think there’s one approach that works better than another. Each writer has to find their own way. 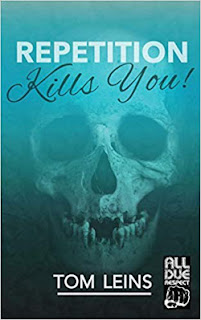 Here’s what Leins says about how he approaches violence: “For me the violence has to be bleary-eyed and unpleasant, but never gratuitous. A few years ago, I was taking my son to the library, when I walked past a pub in town, and saw bloodied people crawling out of the door. I later found out that someone had run amok with a hatchet. The surreal image of a ravaged-looking man draped over one of the many mobility scooters parked outside, leaking blood, stayed with me. This wasn't slick Hollywood violence. Whatever happened inside was clumsy and reckless, and I think it is important to convey that feeling.”

Leins has set himself apart from the crowd by having a specific, different vision. The violence is “clumsy and reckless,” merely someone who’s “run amok with a hatchet.” It’s immediately evident in his work, too--the piled-up corpses and fist fights just feel like part of the world he’s created.

The film Drive, directed by Nicolas Winding Refn, also puts its own spin on violence. Each murderous act of our protagonist is sudden, brutal, and lightning fast. No drawn-out, twenty-minute fisticuffs. His approach makes each scene memorable.

In Chris Orlet’s A Taste of Shotgun, the protagonist goes about killing people with the same world-weary, piss-poor attitude he has about everything else. His violent scenes work perfectly because of his strong voice and motivation for his characters.

Another approach to writing violence is to skip it–include all the lead up without the act itself. The best example I can think of is Shirley Jackson’s “The Lottery.” The stoning that is the central event of the story is only referred to directly in the last two paragraphs. And, of course, the chilling last line: “It isn’t fair, it isn’t right,” Mrs. Hutchinson screamed, and then they were upon her.

Similarly, in Patricia Highsmith’s The Talented Mr. Ripley, the murder that is the focal point of the book takes up less than a page. The bulk of the novel is about the aftermath of the murder and Ripley inhabiting his victim’s identity.

What all of these approaches have in common is that each is derived from character. When violence is included for its own sake, rather than naturally evolving from the story, it loses its power.

Chris Rhatigan is a freelance editor, publisher of All Due Respect, and author of several books.

I find the long fight descriptions tiresome, and I wrote a book where the last act is set at an underground kumite fight to the death. In a fight you rarely have time to think and don't remember everything afterward. I like to try to reflect that.
When fighters get all scientific like we're built of torque wrenches and they plan out their strikes like a choreographed dance move, it makes me laugh. As Tyson said, "everyone's got a plan until they get hit." But when the biggest action hero in books practically never gets hit, I don't think readers want realism. Fantasy is fine for them.

Having had a misspent & wayward youth, and though generally a hoot, I had my share of street fights...about 7 that I can recall. And now I write fight & violence scenes and can say this first hand: everything happens fast & with a huge burst of adrenaline-fueled energy, then dissipates, exhausted, just as fast. As Tom Pluck says, no choreography---more like grab for the balls, swing, flail, kick, gouge, headlock-punching, and head bashing where possible. And though I heartily agree that fight scenes shouldn't be gratuitous, there is no shortage of reasons why people choose to physically fight---most of them stupid, but that's another discussion.

First person POV should be fast, clumsy, perhaps savage, and not choreographed, but does that rule stand for, say, third person POV? If the event is being described by someone else, how much detail would be believable Slightly more, perhaps. Finally, third person omniscient may allow for even more precise detail if it informs the drive and training of the fighter/fighters. The omniscient narrator can provide insight beyond what the character may be thinking during a burst of violence, I believe.
Thoughts?